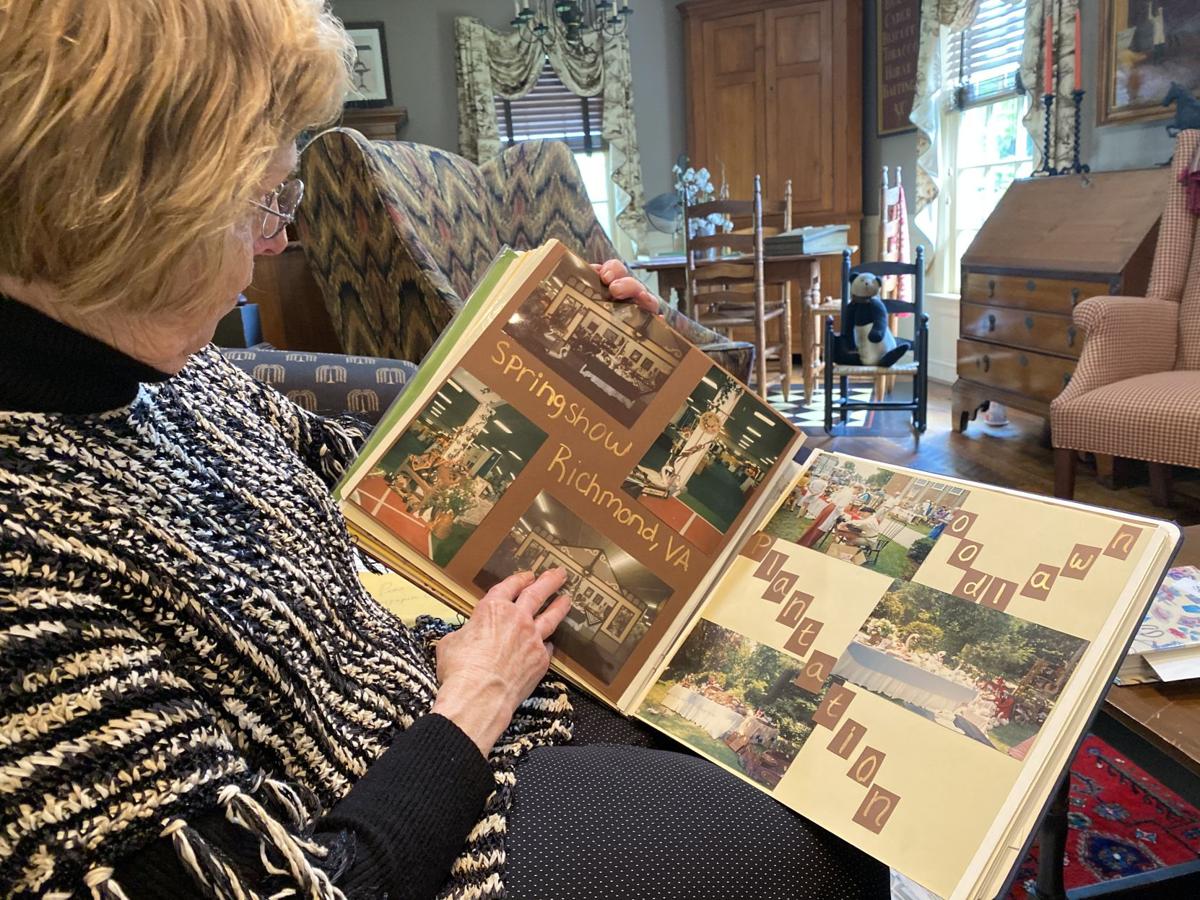 Beverly Sims flips through old photo albums to recount nearly 40 years of fond memories of her business, The Pine Cabinet. Now that she’s 78 years old, Sims has decided to close her business and sell her products in local consignment shops. 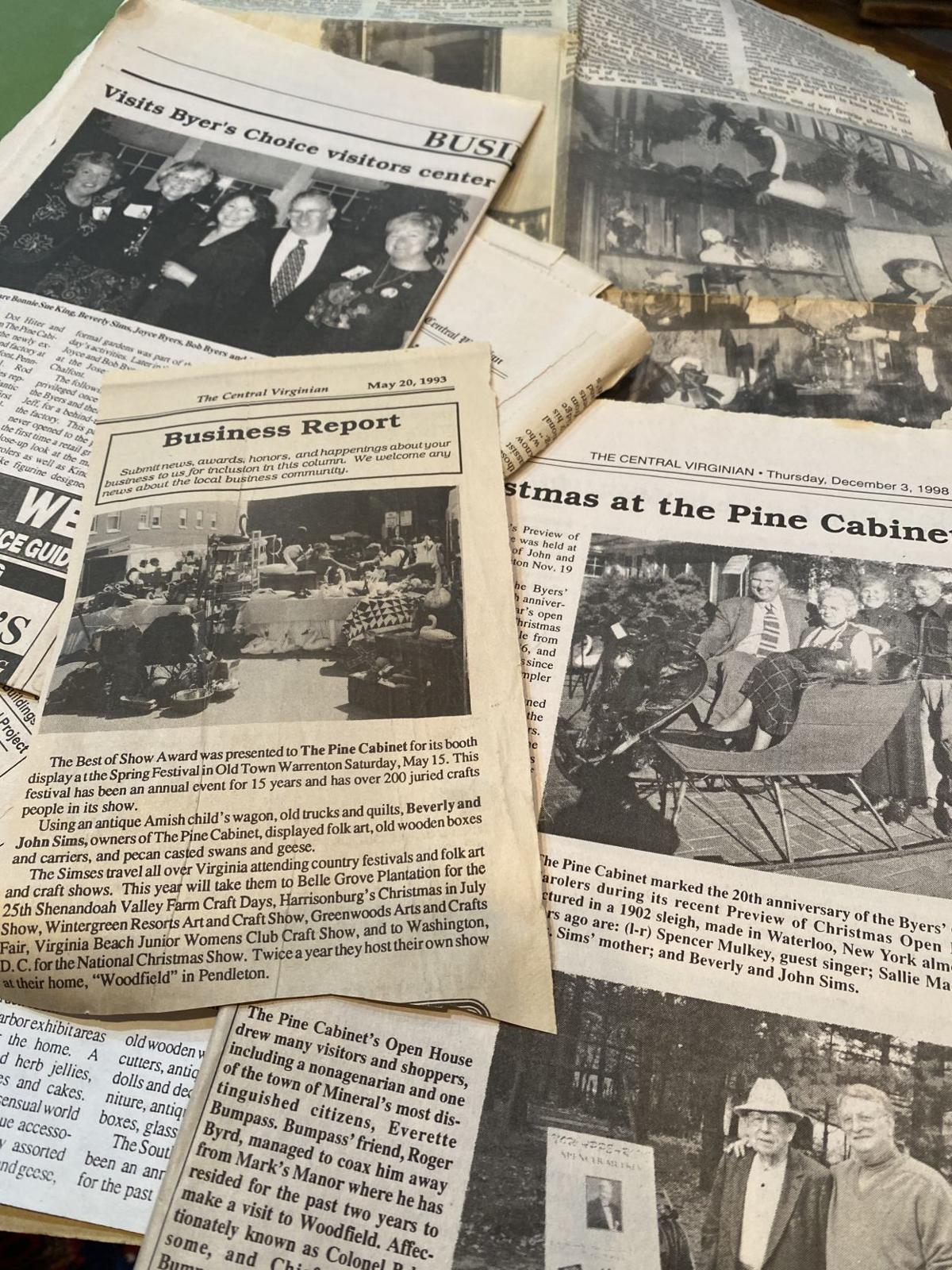 Beverly Sims is no stranger to The Central Virginian. Since starting her business, The Pine Cabinet, in the early 1980s, she's been featured many times in the local newspaper for her crafts and business achievements. 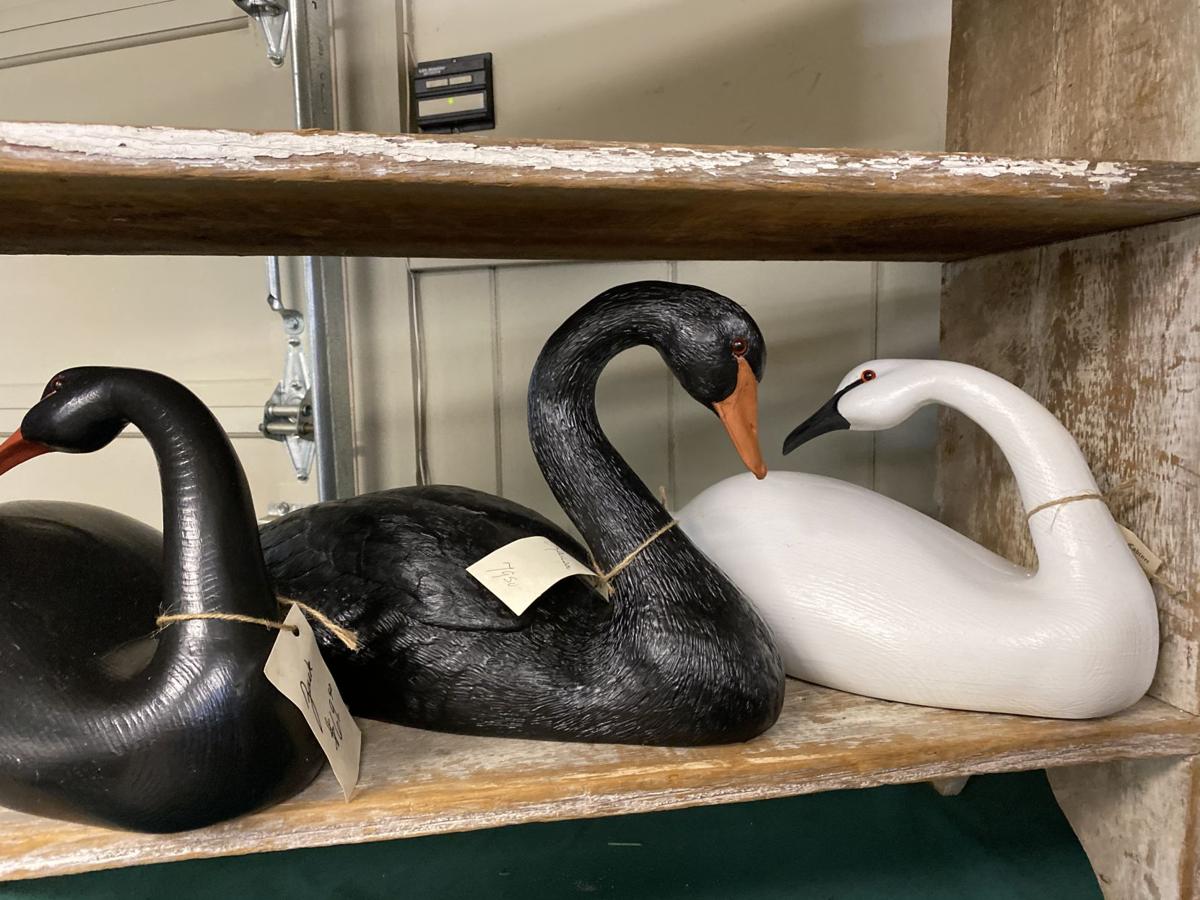 Beverly's best selling product was her custom painted swans. She and her husband, John, would travel to North Carolina to pick up truckloads of unfinished molds, then bring them home to paint and sell them. 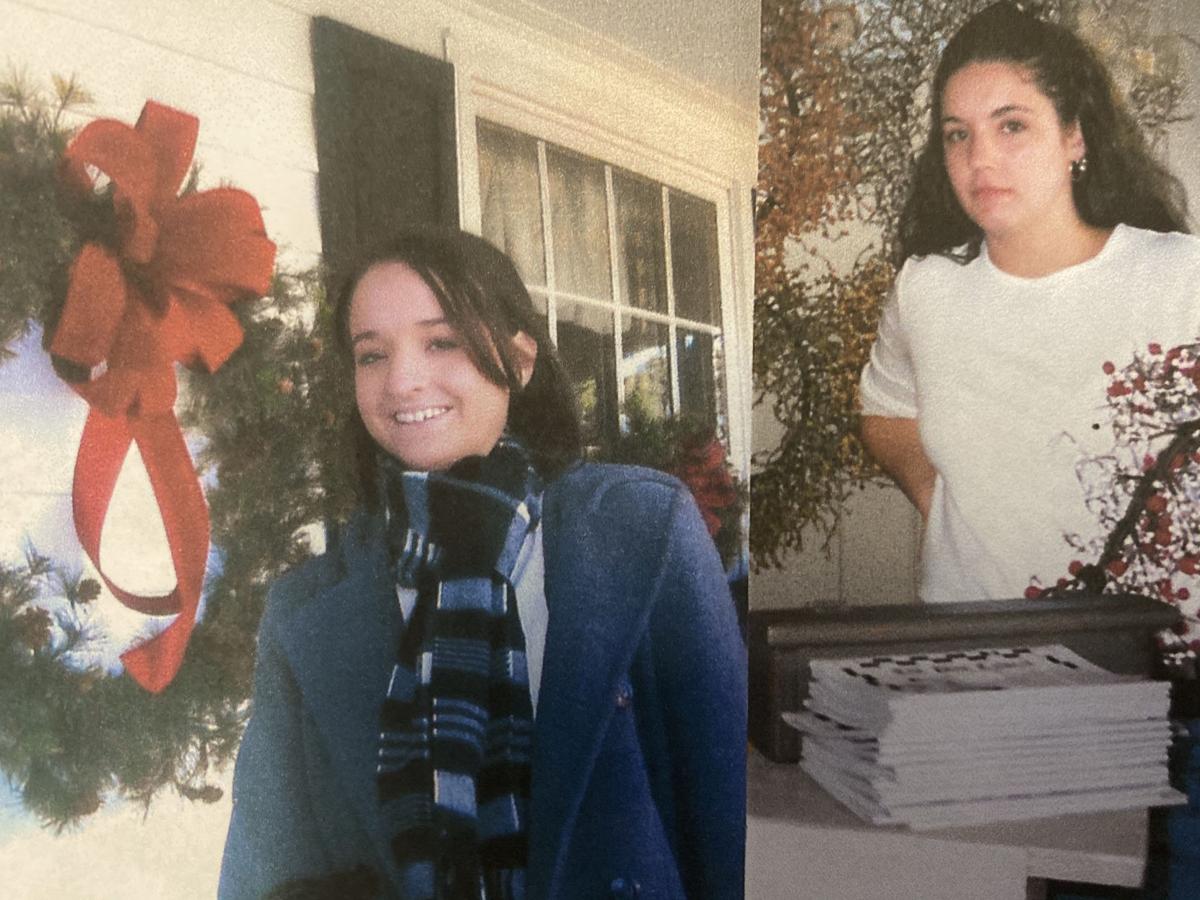 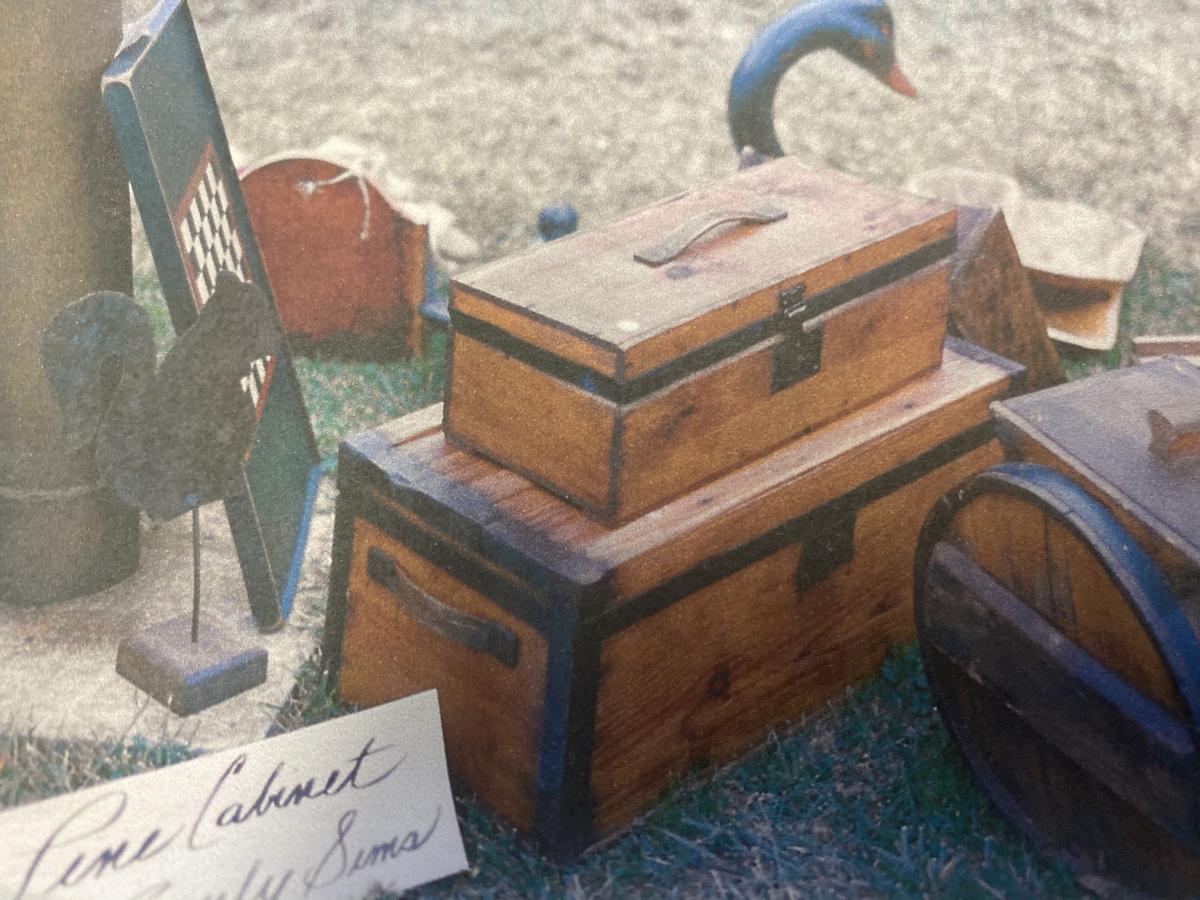 Beverly set herself apart from other businesses at craft shows by selling not only her custom creations, but antiques as well. She started out using the antiques as staging for her booth displays, but over time, customers became increasingly interesting in purchasing the antiques, so she added the new product line to her store. 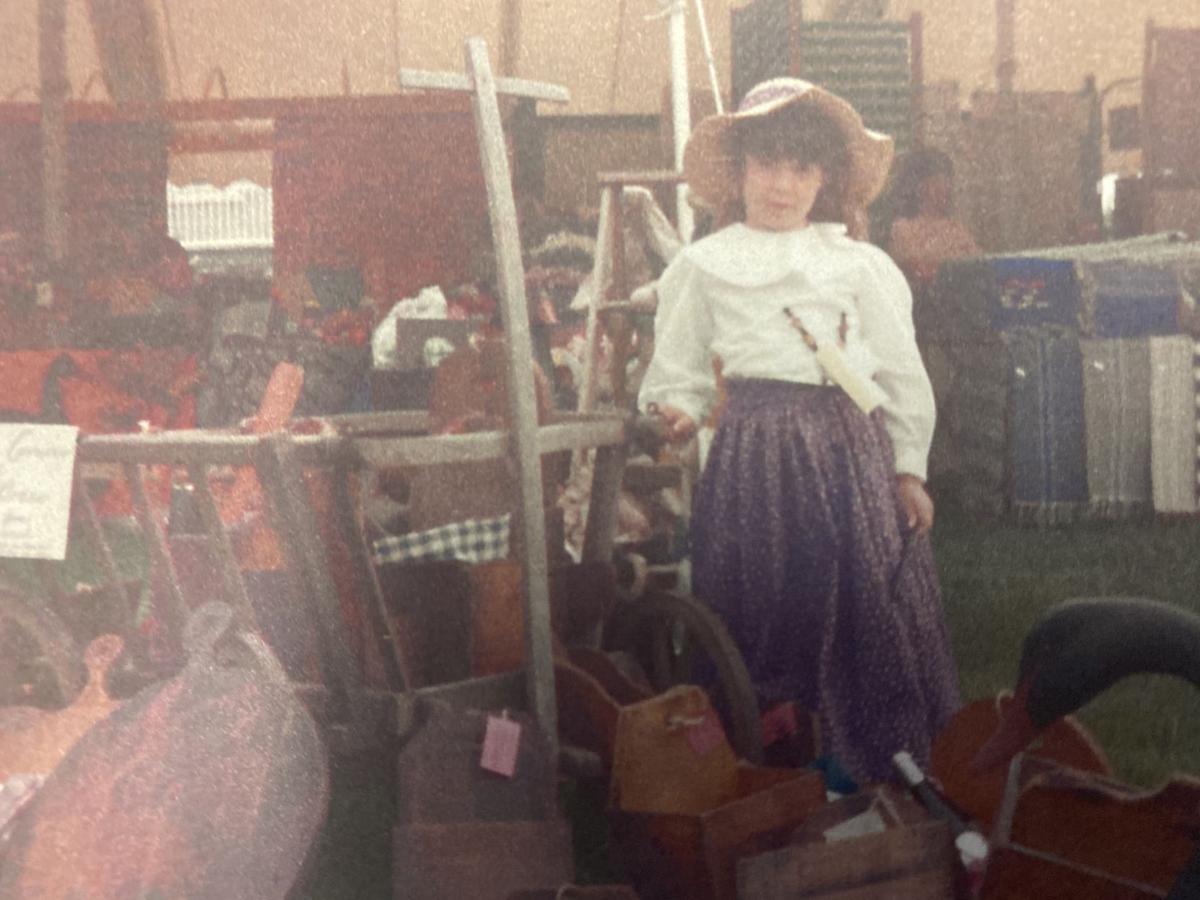 Beverly Sims flips through old photo albums to recount nearly 40 years of fond memories of her business, The Pine Cabinet. Now that she’s 78 years old, Sims has decided to close her business and sell her products in local consignment shops.

Beverly Sims is no stranger to The Central Virginian. Since starting her business, The Pine Cabinet, in the early 1980s, she's been featured many times in the local newspaper for her crafts and business achievements.

Beverly's best selling product was her custom painted swans. She and her husband, John, would travel to North Carolina to pick up truckloads of unfinished molds, then bring them home to paint and sell them.

Beverly set herself apart from other businesses at craft shows by selling not only her custom creations, but antiques as well. She started out using the antiques as staging for her booth displays, but over time, customers became increasingly interesting in purchasing the antiques, so she added the new product line to her store.

For nearly 40 years, Beverly Sims has blessed the community with her crafts and antiques. Now, that she’s out of business, she’s ready to relax in retirement.

Sims’s store started from humble beginnings and turned into a family legacy she’s proud of. With a couple of hundred dollars in startup funds, Sims spent her first few dollars on a pine cabinet she bought from Seay’s Furniture in Louisa. The cabinet sat in her mother’s beauty shop, where clients would see her products on display.

“It started out really small and it’s really grown since then,” said Sims.

In the early 1980s, The Pine Cabinet started out selling brass from Virginia Metal Crafters Brass Reproductions, then later pivoted to crafts and antiques. Sims became popular for her swans, which were made from pecan cast molds from an artist in North Carolina. Every so often, Sims and her husband, John, would make the trip to North Carolina to buy the unfinished molds from the artist then paint and refinish them.

Instead of looking at her home business as just a hobby, Sims viewed it as a career.

“The business really did grow. I wasn’t expecting that,” she said. “The business just kept growing because we kept adding products.”

“I may not have had $500 in sales my first year,” she said. “But I reported it and paid sales tax. I did whatever was proper. It was an official business.”

In the beginning, most of the products she sold were crafts and eventually she expanded to antiques. It wasn’t by design, but customer demand. In her craft booths, Sims would stage her products using antiques, which is something other vendors didn’t do. To her surprise, many of her customers were very interested in the antiques, so she decided to start selling them as well.

Along the way, Sims traveled near and far to participate in shows and expos. Along the way, she’s met “oh so many talented people.” A few of her favorite shows were in Leesburg and the National Christmas Show, in addition to her annual open house event located at her home in Pendleton called Woodfield.

“People would come from all over Virginia to come to our open house events,” she said. “Every year, more and more people came,” she said. “Most of whom found out about the event from word of mouth.”

What this national daycare center is doing to stay open safely

“You see, there wasn’t Facebook back then,” she said. You had to invite people by mail.”

With a mailing list of over 3,000 people, “you can imagine how much postage would be,” said Sims. “So I started using other means such as email and Facebook” once those avenues became available. She credits the online technologies with “really helping her business continue to grow. I’m not a real big Facebook person,” she said. “But I enjoy the marketing part.”

Held every October, the Christmas season open house event eventually expanded to four days and required the help of nearly 20 of Sims’s friends and family members. Her team ran three cash registers, packaged gifts and served warm baked goods to the many customers who showed up every year.

Sims recalls her open houses being similar to a “mob of people at the grocery store before a big blizzard.” It was a delightful experience with everyone standing in line, talking to each other, asking, “Oh! Where did you find that?”

Then having her sales team run back to the sales floor to find the item for more customers in line. “It was lots of fun,” she said. “It was a wonderful business.” At the height of her business, Sims welcomed nearly 1,300 people in a weekend to shop her annual events. Every year, many people looked forward to her “After Thanksgiving” markets and “Summer Parties” in August. “I would just get to creating and people loved it,” she said.

For many years, John helped her with the business. When he retired 15 years ago, he began helping her full-time, she said. “It was a lot of work.” Unfortunately, John passed away almost two and a half years ago. Since then, things haven’t been the same.

On top of that, at age 78, Sims said “she’s getting old and doesn’t have the energy like she used to.” With her children and grandchildren helping her every step of the way, she’s ready to hang up her hat and close.. At least officially. You can still find her crafts in local consignment shops such as The Farm Stand in Bumpass, and if you’re lucky, you may find one of her locally-renowned swans sitting pretty in a second-hand store.

For anyone wanting to start a new business, Sims has some advice to offer.

“When you’re working for yourself, you have the hardest boss,” she said. “It takes discipline and you better be dedicated. For me, my business didn’t happen overnight. But when you love what you do, it’s not work,” she said.