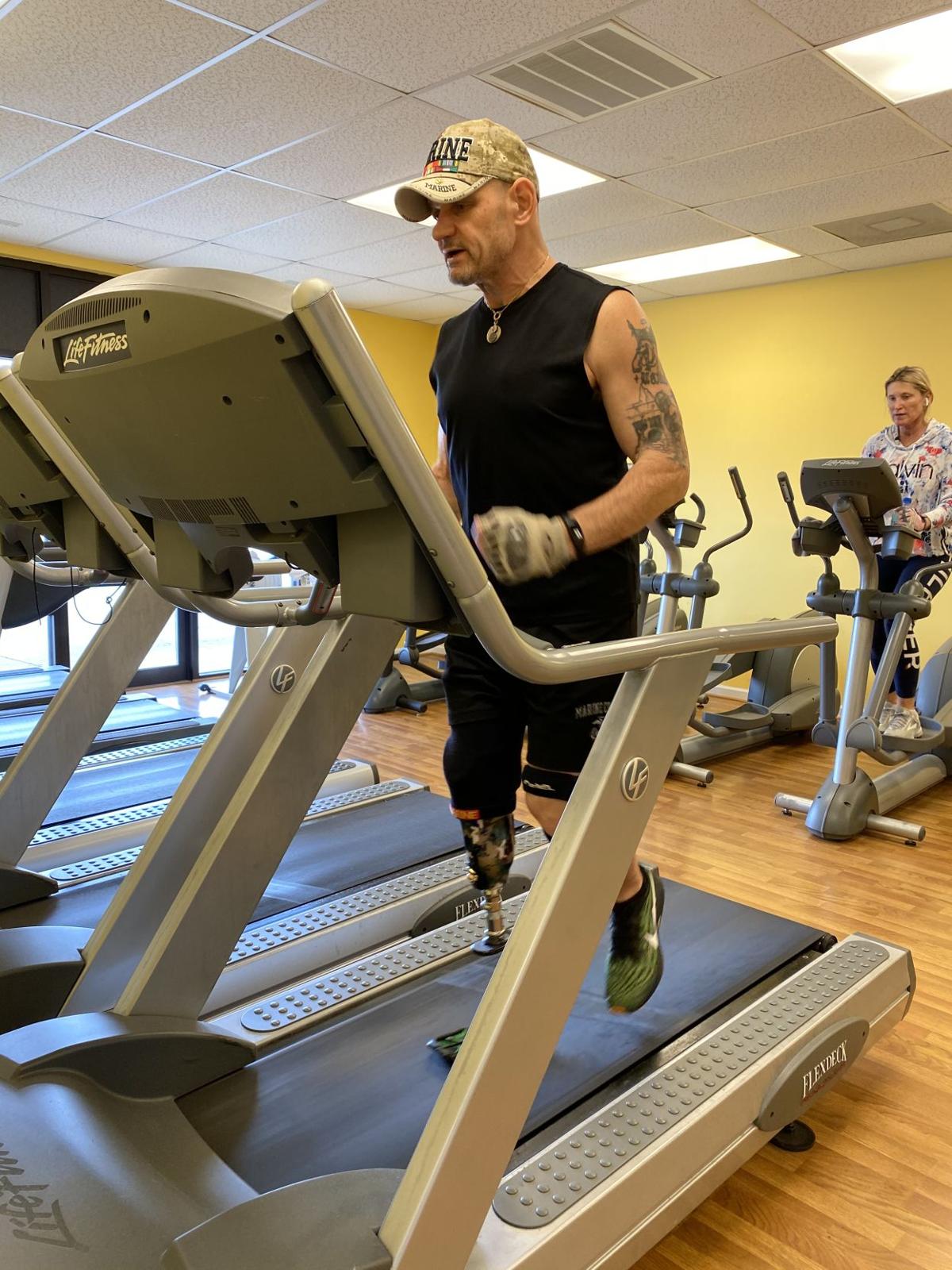 Ed Purcell, former marine and amputee, trains twice a week in Fisher’s Fitness Gym and runs weekly through the town of Louisa to prepare for his first marathon in 25 years. 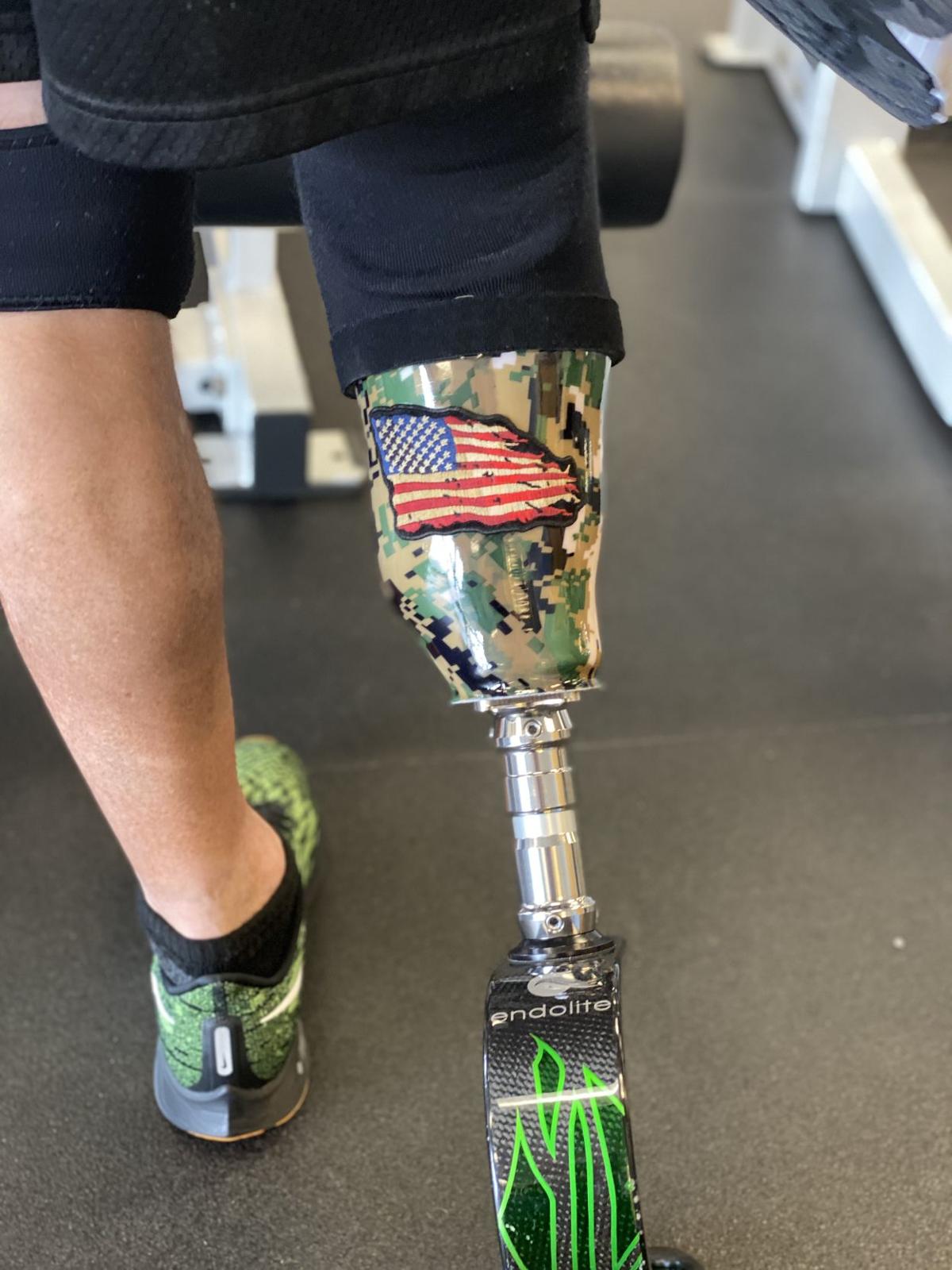 Ed Purcell shows off his prosthetic leg, which features a custom design to honor his service as a marine.

Ed Purcell, former marine and amputee, trains twice a week in Fisher’s Fitness Gym and runs weekly through the town of Louisa to prepare for his first marathon in 25 years.

Ed Purcell shows off his prosthetic leg, which features a custom design to honor his service as a marine.

Last year, Ed Purcell had his right leg amputated. This year, he’s running marathons. The former marine will run his first half-marathon later this month and he’s not stopping there.

He’s also training for the Marine Corps Marathon in Arlington this October. It will be his first full marathon in 25 years. This time, though, he’ll use a prosthetic leg.

The 57-year-old Louisa man was involved in a serious car accident 13 years ago that changed his life. Doctors didn’t think he’d ever be able to walk again. With a broken pelvis, patella and multiple other fractures, including a crushed foot, his recovery is nothing short of a miracle.

Over the course of 12 years of excruciating pain, multiple infections and eight surgeries, he begged doctors at private hospitals to amputate his foot but no one would do it.

It wasn’t until 2018 that he finally said, “enough is enough,” and went to the Veterans Administration hospital in Richmond. There, he met a surgeon who agreed to perform the amputation.

“I’m so happy now,” he said. “I don’t consider myself disabled. God just gave me a new life now.”

After his surgery, Purcell spent many months in the VA’s rigorous rehab bootcamp, which is reserved for a small percentage of those who have the tenacity to “adapt and overcome,” he explained.

The day of the accident, Purcell was coming home from a long shift at North Anna Power Station, where he worked as a security guard, when he had a flashback of his days in the service. The next thing he knew, he quickly swerved to miss the vehicle stopping in front of him and hit an oncoming car. Neither driver walked away without serious injuries.

The road hasn’t been easy for Purcell or his wife of 32 years, Penny. The accident has taken a serious toll on their marriage and finances.

Purcell, who loved his job at the power plant, had to retire and take disability two years after returning to work after the accident. Unable to pay their bills, Purcell and his wife lost their home and had to file bankruptcy because of all the medical bills. They have continued to support each other even through the tough times.

“We lost everything. The dog even died the same week we lost the house,” he said. “But I have hope everything is going to turn around.”

160K backlogged tests: The struggle to keep up with the pandemic

Through everything, the love he and his wife share has endured. Penny has served as his caregiver since the accident and is a huge source of support for Purcell.

“When one person was down, the other one picked up the other,” he said. “It was tough but we made it. I don’t think too many couples would be able to make it through what we’ve been through and stay together.”

For the former marine, failure is not an option, and quitting is not in his vocabulary. He credits God with giving him the strength needed to overcome his battles.

Since the accident, he’s relied on the strength of two verses from the Bible to get him through his struggles.

After the crash, he constantly reminded himself that “I can do all this through him who gives me strength,” quoting the verse Philippians 4:13. Since reaching a new level in his recovery, now he tells himself, “I have fought the good fight, I have finished the race, I have kept the faith,” a line from 2 Timothy 4:7.

Purcell sincerely believes that he’s here [on Earth] for a reason and that God has a plan for him.

At five years old, Purcell suffered a skull fracture after getting hit by a car while riding his bicycle. During his life, he has endured three traumatic brain injuries, along with numerous other health issues that he’s overcome.

“My whole life has been a challenge,” he said. “Whenever I’ve been told I can’t do something [like walk again], I do it anyway. I like the challenge.”

Purcell now serves as a volunteer mentor for other amputees at the VA hospital in Richmond. He wants others to know there’s hope and a lot of help out there for anyone struggling.

One way he keeps his hope alive is by training for upcoming marathons. He works out twice a week at Fisher’s Fitness and runs through the town of Louisa once a week using his prosthetic leg. His brother, Tom Purcell, who is a personal trainer and gym director in Virginia Beach, plans his exercise schedule and checks in regularly to make sure he’s on track.

Ed Purcell believes people can achieve anything if they have a “superior mind, and superior attitude.”