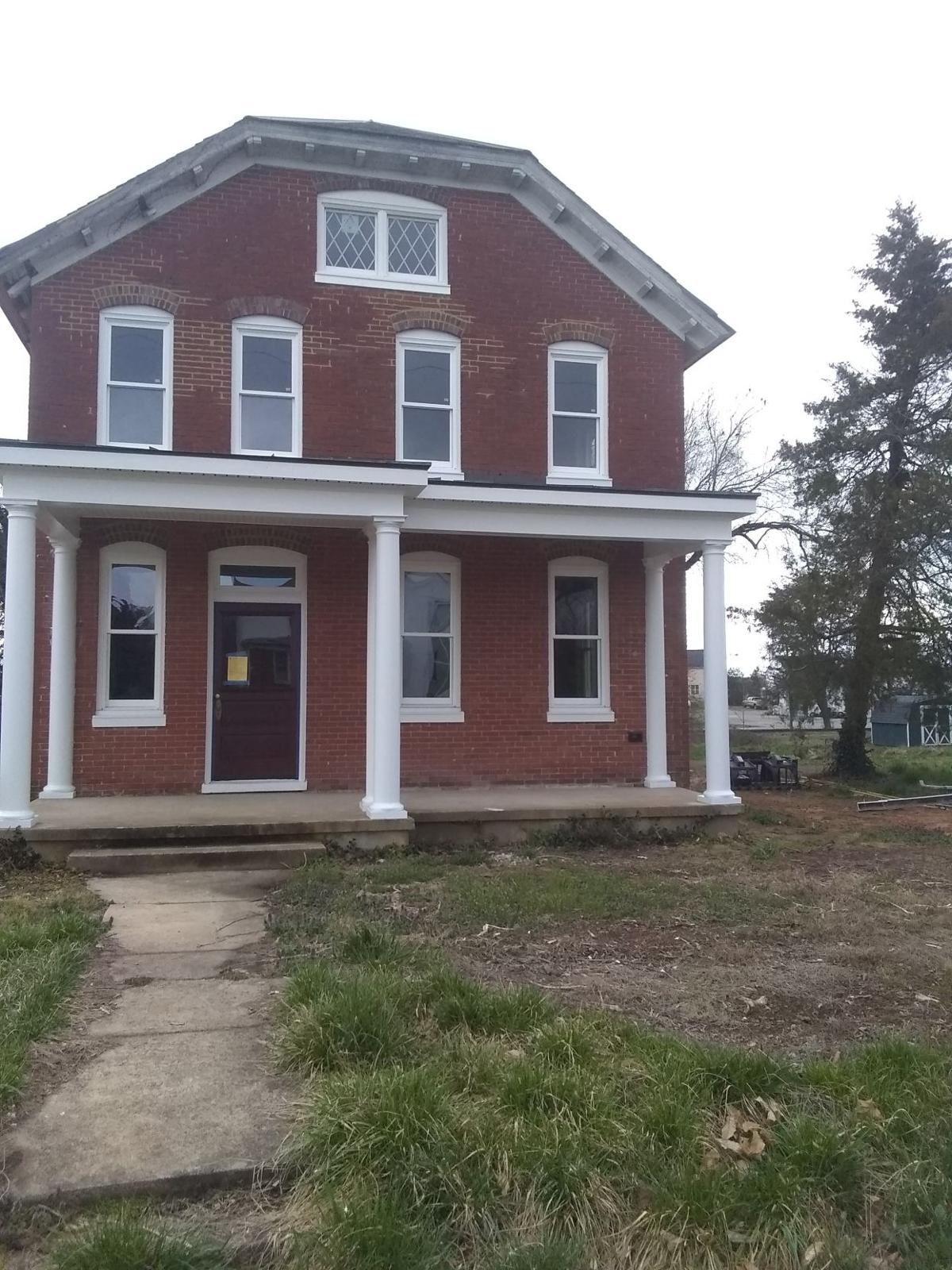 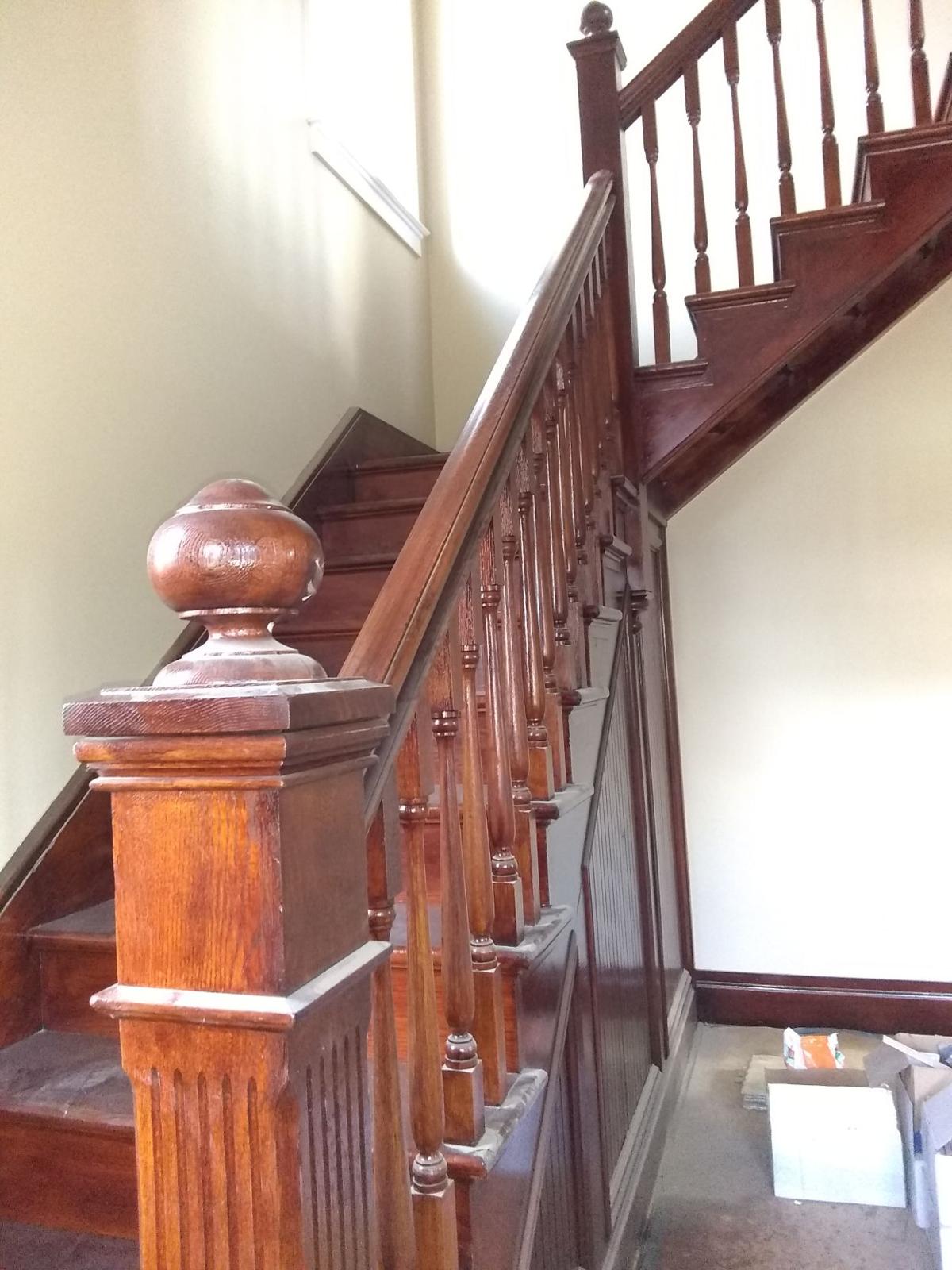 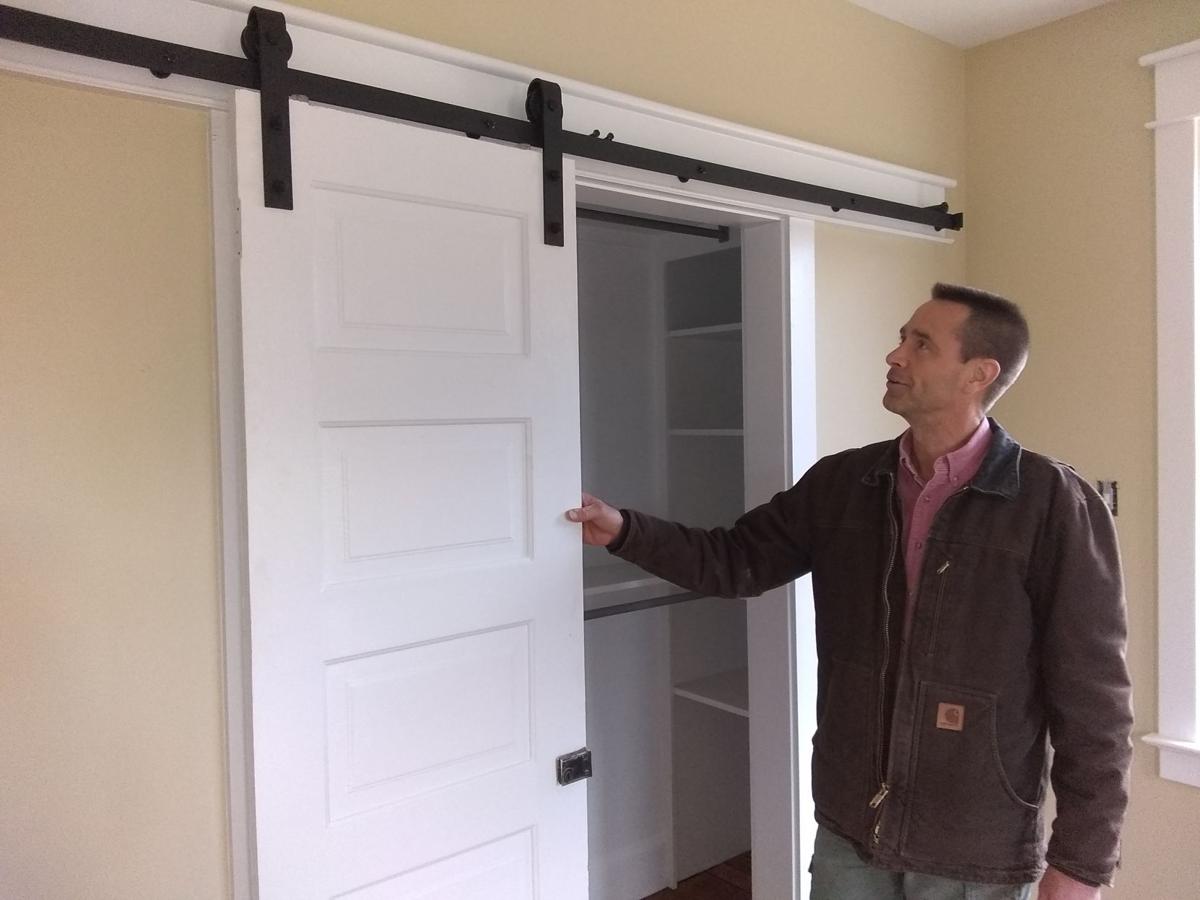 Gerald Purcell has worked over the past two years to restore an early-20th-century house on West Street in the town of Louisa. Here he shows how he used a barn door style for an upstairs bedroom closet to save space.

Gerald Purcell has worked over the past two years to restore an early-20th-century house on West Street in the town of Louisa. Here he shows how he used a barn door style for an upstairs bedroom closet to save space.

An old brick house on West Street in the town of Louisa that was in a rapid state of decay has a fresh look these days.

Trees had grown up to almost obscure the front of the house from view and the roof had suffered storm damage. Inside, termites had eaten through much of the wood supports holding up the structure, to the point that the stairwell was the only thing preventing the house’s collapse.

“I don’t understand how the house was still standing,” said Gerald Purcell, a Louisa resident who has been gradually restoring the home over the past two years. “We put in all new beams and floor joists. The termites came in through the crawl space and worked their way up a stud until it got too dry for them.”

The house was built by George Leigh and Brothers in the early 1900s. Leigh built a number of brick homes in the town and his firm was the contractor for the Louisa County Circuit courthouse, which was completed in 1905.

Arthur Baker, an African American who lived in Louisa County and served with the Buffalo Soldiers in racially segregated U.S. Army units in the West, owned the yellow house next door. His nephew, Jesse Perkins, owned the brick house until he died in 2005, according to George Grady, a Louisa resident who gives presentations about the Buffalo Soldiers’ history.

Purcell shares an appreciation for old houses with his father, John Jerl Purcell, who helped found the Louisa County Historical Society in 1966. Leigh built a house at one end of West Street that the older Purcell’s grandfather lived in.

Leigh’s signature is scrawled on the back of pieces of wood in various parts of the house. It was common back then for builders to do that and cover it up, Purcell said.

The younger Purcell approached the repair job with an eye toward saving as many of the house’s original features as possible.

Biologist explains how to have company safely for Memorial Day

“This foyer is as close to the original as we could make it,” he said. “We lifted all the paint off of the wood — some of it was stained and some was brown paint. This is the original base, door and trims and transom. The only thing I did was add another transom window on the outside so it’s double-layered for energy efficiency.”

Purcell said he dislikes sheetrock and left the original wood wherever he could, or used new wood to maintain a period look. In the kitchen, he used wood for the walls and built cabinets to match them.

“An old house like this has tall ceilings, and if you put in new cabinets, they go up seven-and-a-half feet and they stop. I hate that,” he said. “That’s the other reason I custom-built new cabinets. These go all the way to the roof, trimmed out with the crown moulding. You obviously wouldn’t put stuff you use daily in the top rack of the cabinets, you put your turkey roaster up there and use it twice a year.”

Purcell installed new windows, but in the original frames. He ripped out a wall to create a more modern kitchen space, removing one window that did not work well with the revised layout. His son, Louisa Town Councilor John Purcell, is fixing up another George Leigh house built around the same time further down West Street. Gerald took some extra bricks from that house and used them to fill up the hole where the window had been.

Upstairs, the termites had damaged some of the flooring, so Purcell took some of the original floorboards from downstairs and relocated them. He added a bathroom on the upper floor — before there hadn’t been one upstairs at all.

Outside, some bricks had to be re-pointed and acid-washed. Purcell put a new front porch on and is now clearing more brush from the property’s edges.

Purcell’s job as an engineer takes him out of state frequently, part of the reason it took so long to get the home construction done. Plus, he has been helping his son on the other house.

“I’m not a house-flipper, I tend to fix them up to live in them, and I thought maybe I would live here for awhile,” he said. He isn’t sure now whether he and wife will do so.

Yes, The CV is worth it