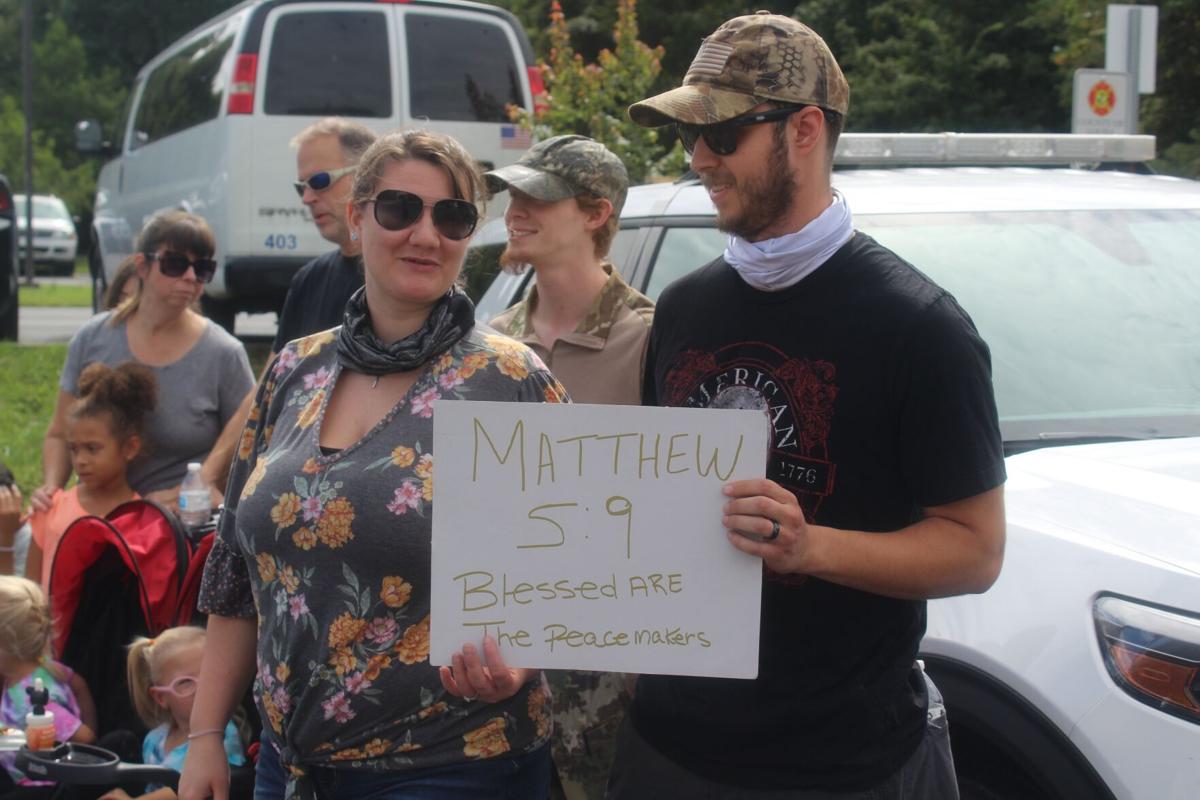 Louisa County residents Krista and Jeremy Hornsby at the Back the Badge Rally and Walk on Sept. 27. 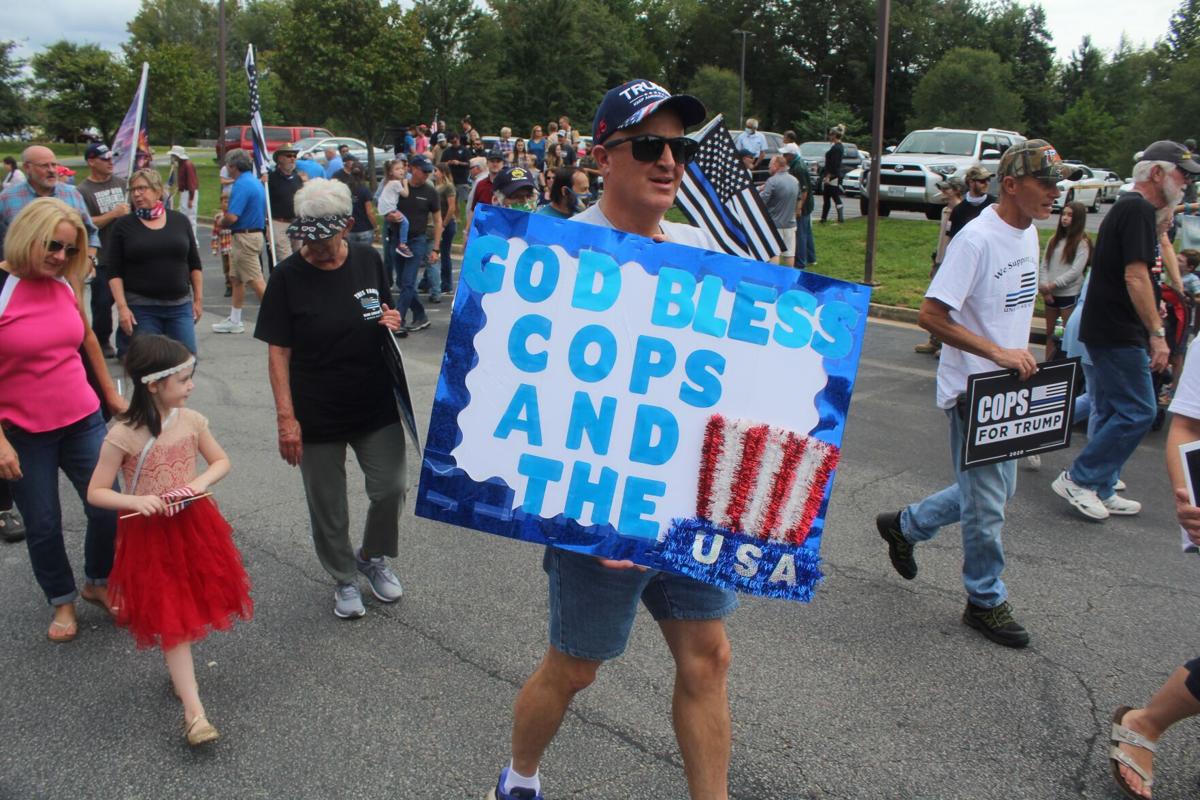 John Ayers, of Mineral, carries a homemade sign as the crowd heads back to the fairgrounds after hearing speakers at the Louisa County Sheriff's Office. 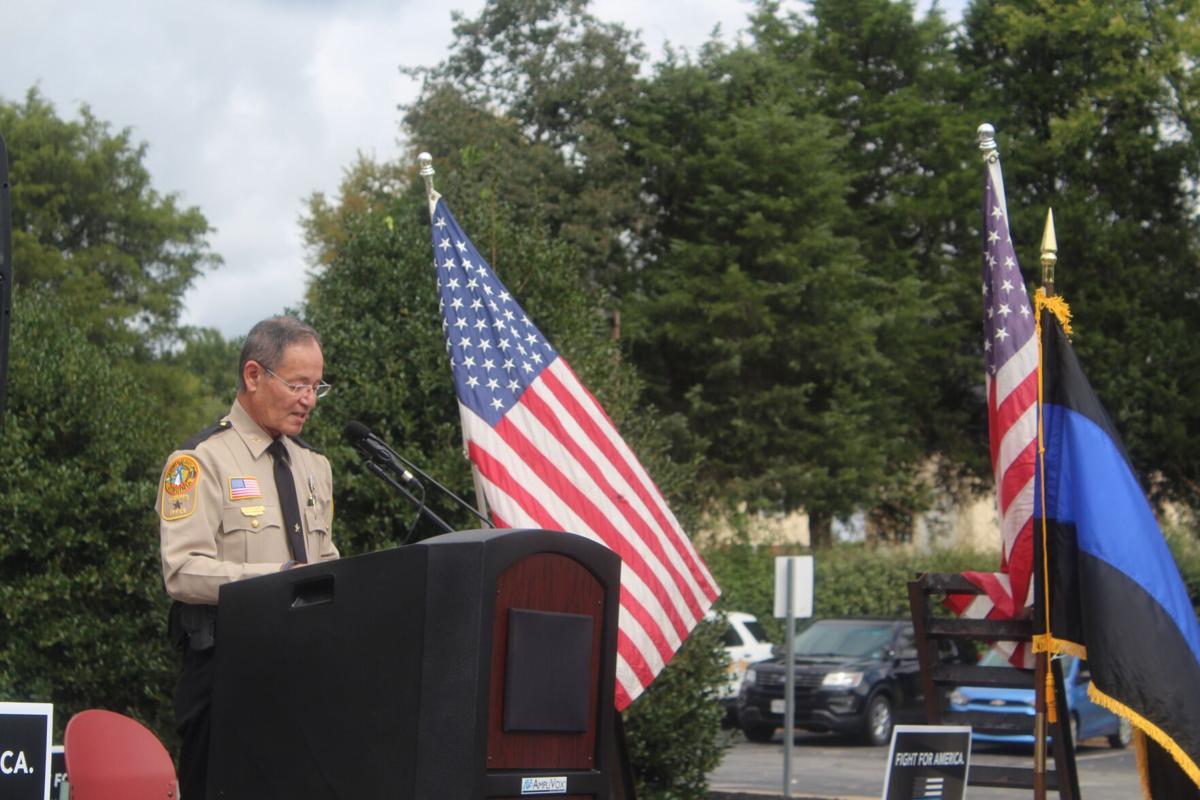 Sheriff Donald Lowe addresses the crowd during the Sept. 27 rally. 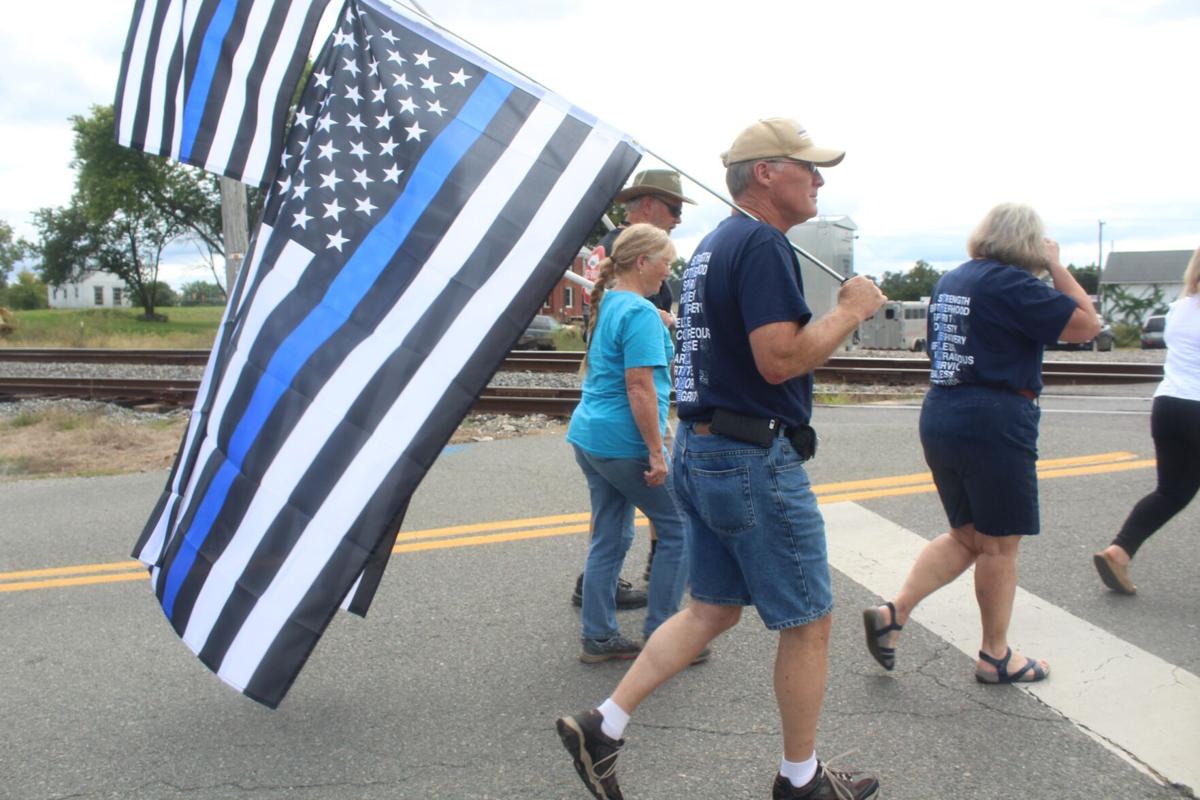 Page Kemp carries a version of the U.S. flag with the "thin blue line." The line represents "the difference between civilized society and complete and utter chaos," said Sheriff Donald Lowe. 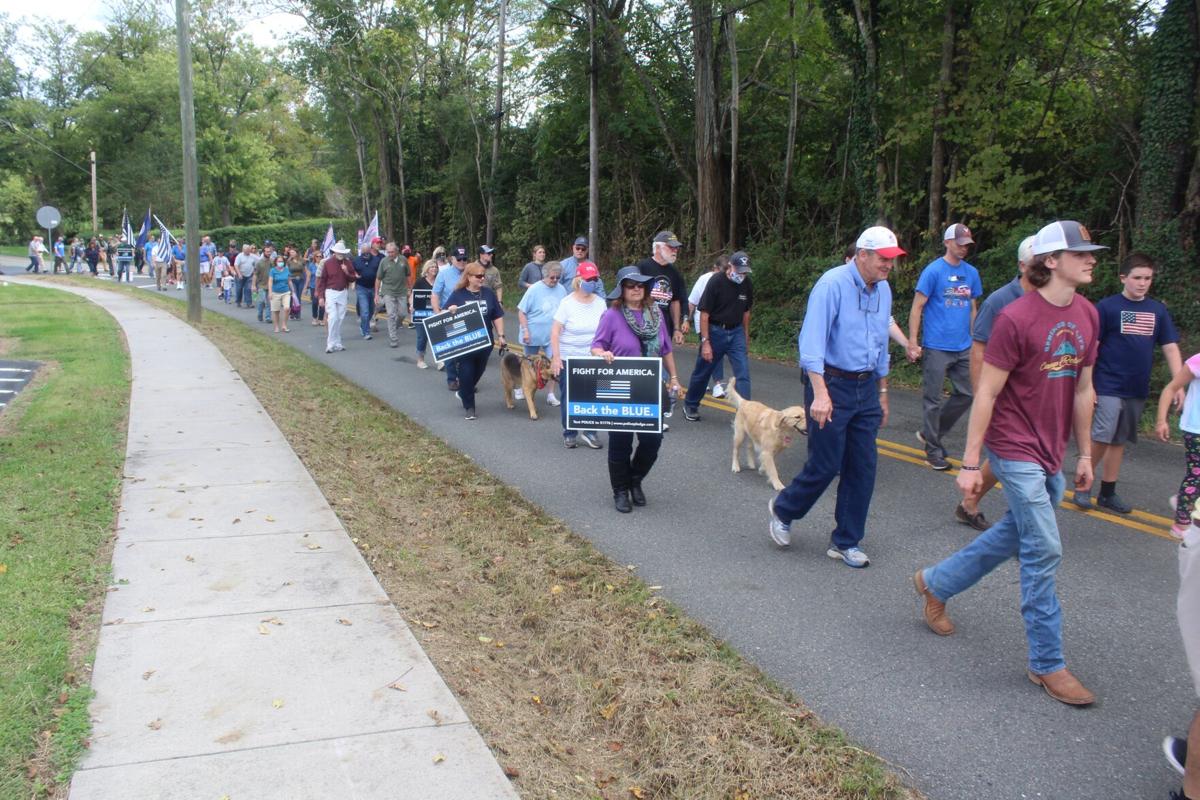 Participants in the Sept. 27 Back the Badge rally head up Fredericksburg Avenue on their way to the sheriff's office.

Louisa County residents Krista and Jeremy Hornsby at the Back the Badge Rally and Walk on Sept. 27.

John Ayers, of Mineral, carries a homemade sign as the crowd heads back to the fairgrounds after hearing speakers at the Louisa County Sheriff's Office.

Sheriff Donald Lowe addresses the crowd during the Sept. 27 rally.

Page Kemp carries a version of the U.S. flag with the "thin blue line." The line represents "the difference between civilized society and complete and utter chaos," said Sheriff Donald Lowe.

Participants in the Sept. 27 Back the Badge rally head up Fredericksburg Avenue on their way to the sheriff's office.

More than 100 people, including residents, town police and sheriff's deputies, participated in the Back the Badge Rally and Walk to support law enforcement on Sept. 27.

The crowd gathered at the Firemen's Fairgrounds in the town of Louisa and marched to the parking lot outside the Louisa County Sheriff's Office. Speakers included Sheriff Donald Lowe, Supervisor Duane Adams (Mineral District) and Nick Freitas, the Republican candidate for the 7th District Congressional seat.

"It's a volatile time to be a police officer," Lowe said. "Every attack on law enforcement is an attack on civilization itself.”

He criticized state legislators for some of their recent efforts to change how policing is regulated, arguing they are blaming law enforcement rather than “the poor decisions that others make.”

Lowe cited FBI statistics that show that nearly 59,000 assaults were committed against police across the country in a recent year. More than 18,000 of these incidents left the officers injured.

Calls to “defund” or reallocate some funding from police departments only make matters worse, the sheriff said, noting that in this environment, more and more officers choose to leave the profession.

In redistricting reform battle, a sharp split on the role of legislators

Political analyst: Is Trump running a campaign from 1954?

“Those who choose to stay have to ask themselves, ‘Why am I even doing this?’” he said. “Who in their right mind would want to risk their lives or their careers every day to do the right thing? Why would anybody allow someone to spit, scream, assault, falsely accuse and threaten them and their families, only to be expected to stand between that same person and pending danger only moments later? Why would anybody have a job where they are constantly looking over their back, nervous about eating at a restaurant and careful about who they interact with?”

Alluding to the events of last summer, in which a police officer’s killing of a Black man in Minnesota touched off weeks of street protests and riots around the U.S., Lowe said his agency “is leading the way to address systemic racism through cultural diversity mandated training, accountability and strong policies governing the actions of our deputies.”

“Less than one percent of cops are bad, which means 99 percent are good,” he said. “Change will not happen until we stop persecuting an entire group because of the actions of a few.”

Adams said no one should be afraid to interact with police officers.

“When that interaction happens, there has to be respect on both sides,” he said.

Citizens call for reforms during March for Unity

Protestors at Saturday’s March for Unity in Louisa called for reallocating some police resources toward other community needs, recruiting more…

LETTER TO THE EDITOR: One candidate has clear stance on health care

Concerns over training in sheriff’s office

Bipartisanship a priority for congresswoman