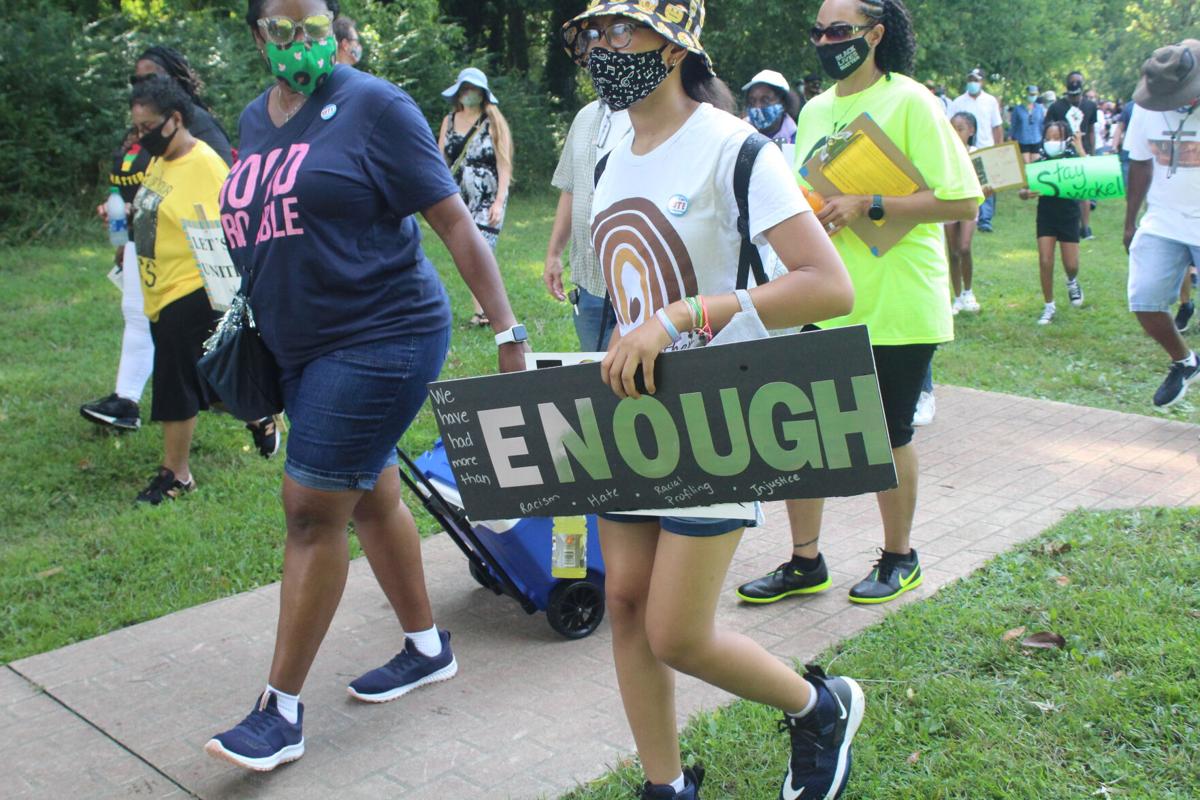 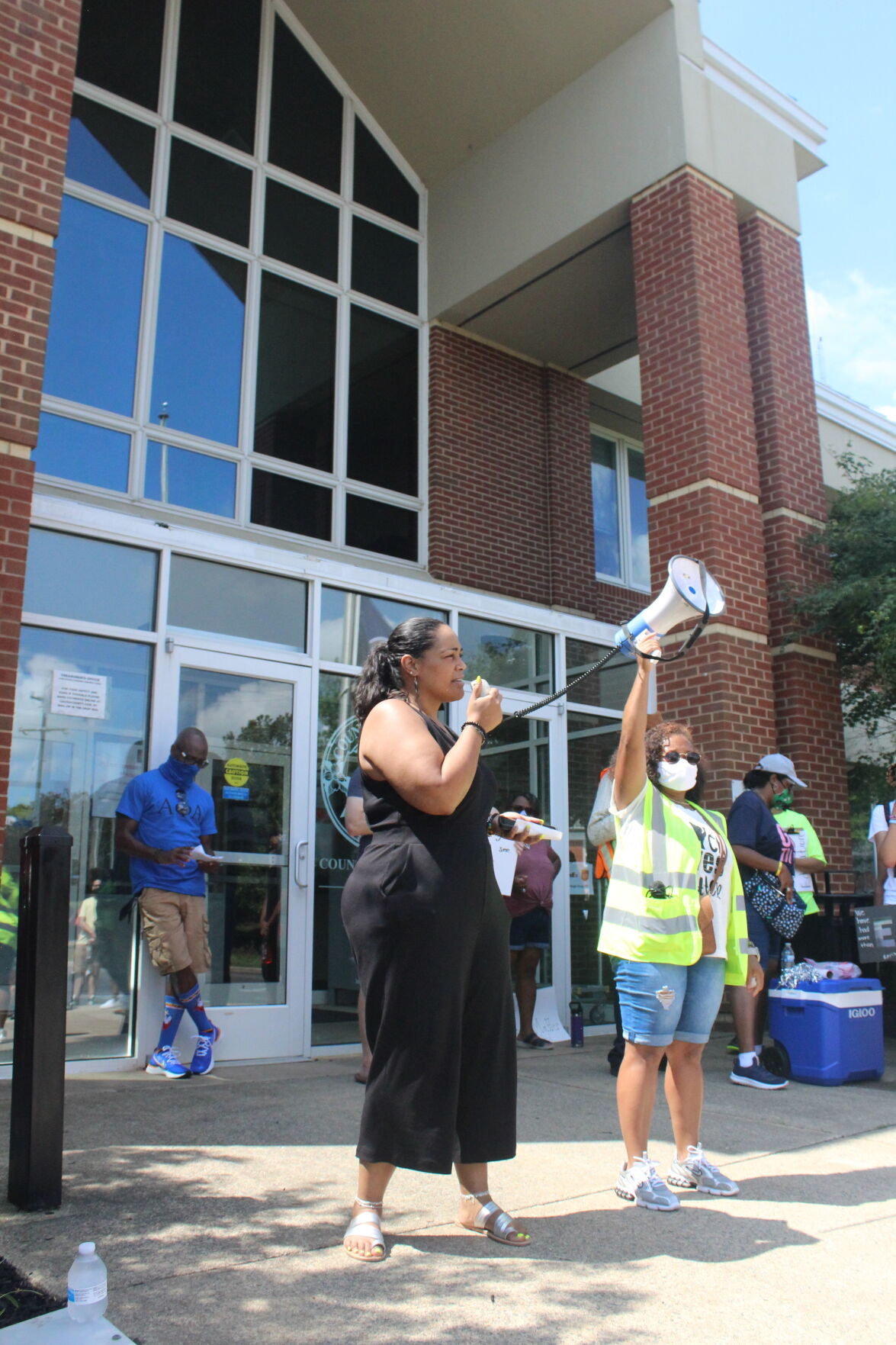 Kim Fortune (at left) addresses marchers in front of the Louisa County Office Building with help from Jaime Hiter. 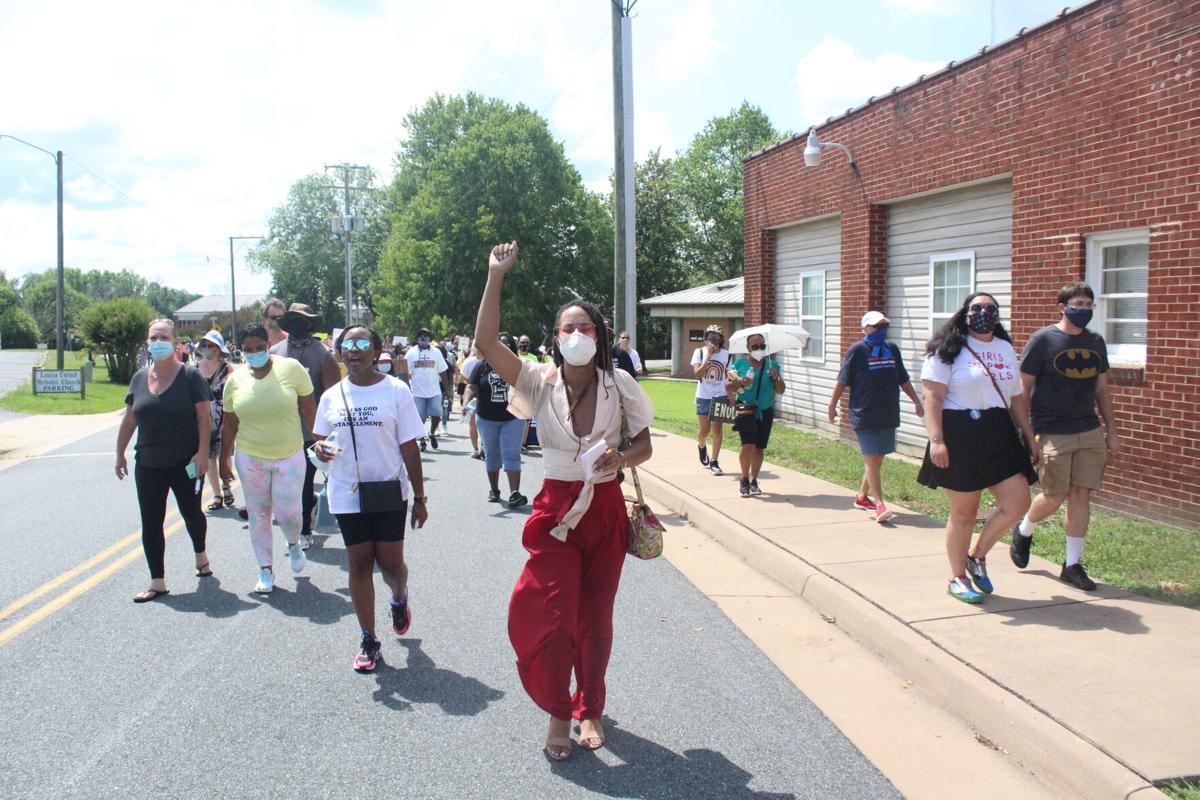 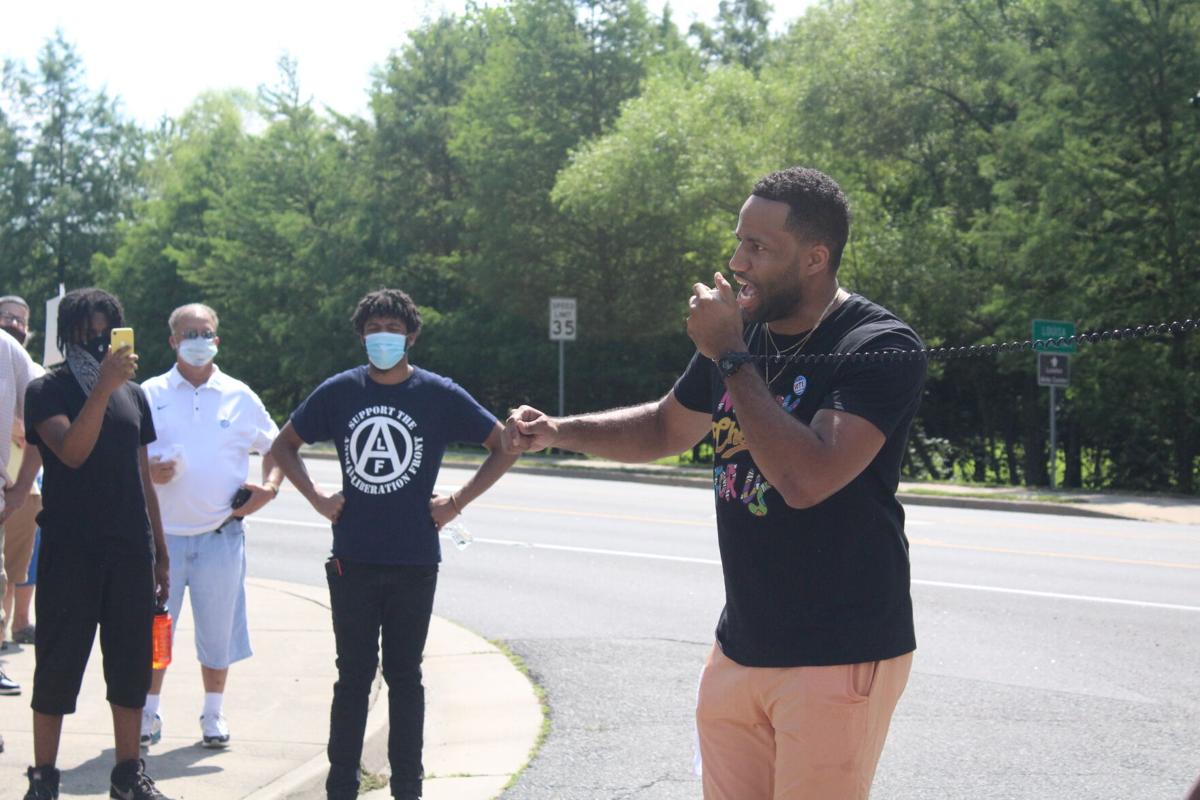 Raymar Byrd talks about the Confederate flag on the welcome sign on Courthouse Road (Route 208) at the corner of Elm Avenue. 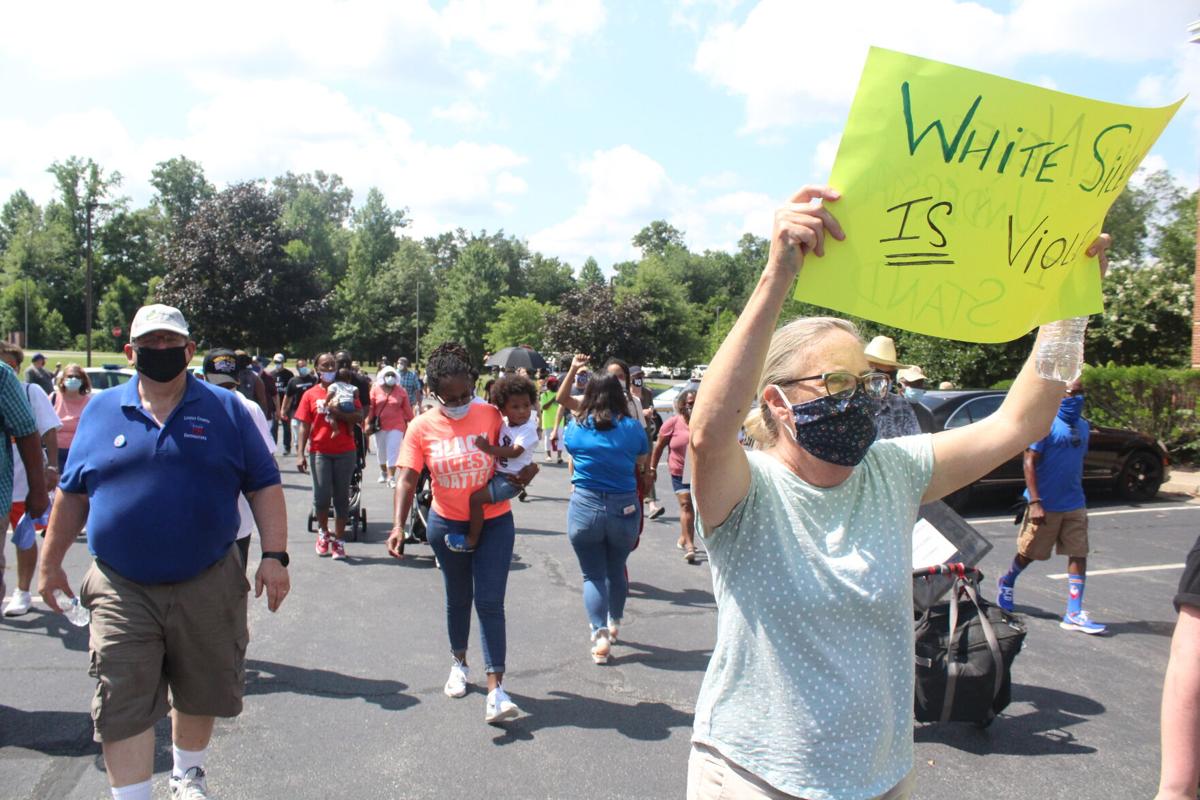 Marchers make their way to the front of the Louisa County Office Building. 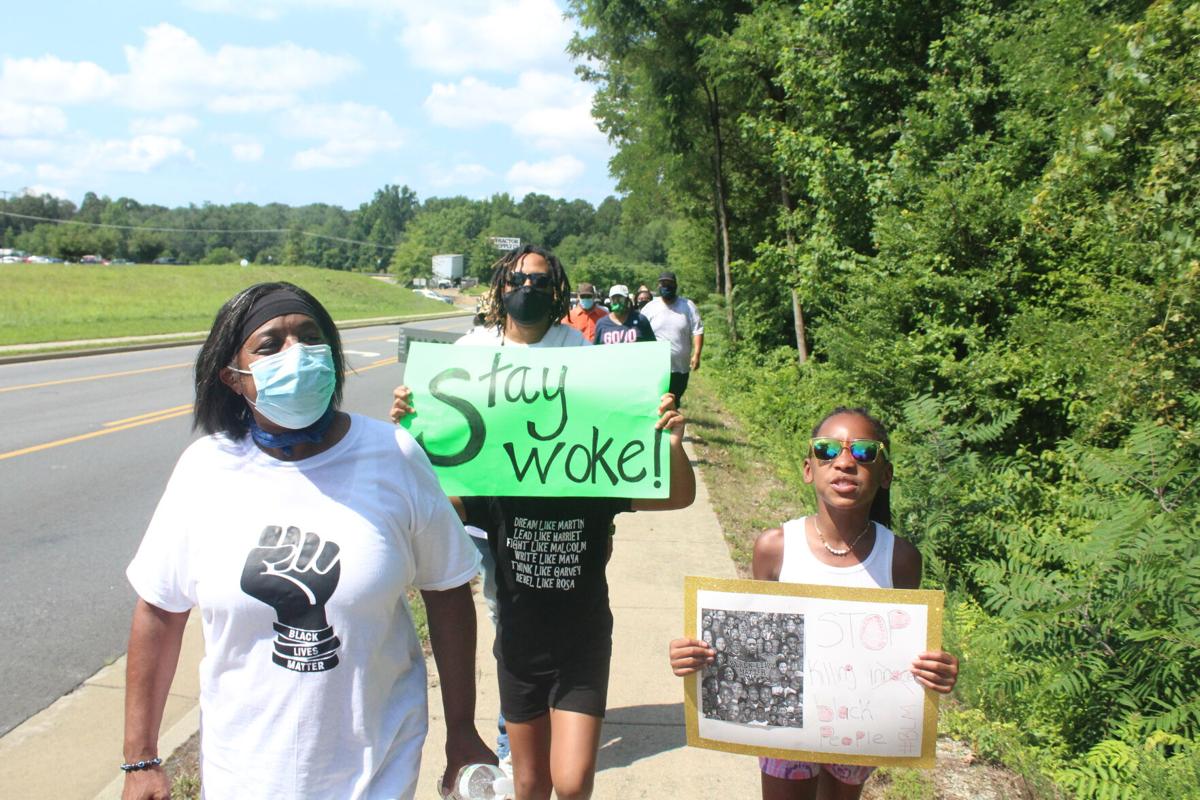 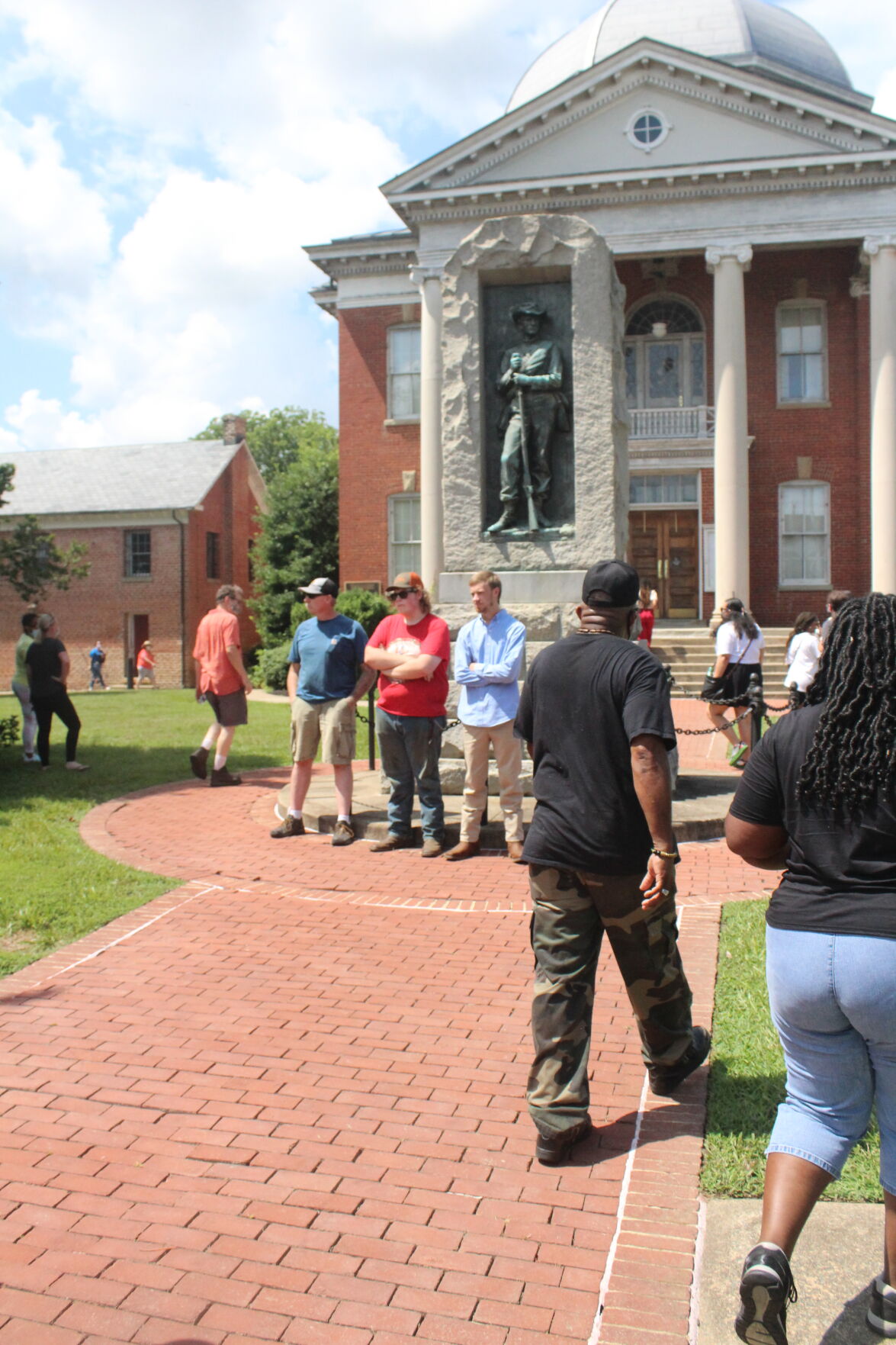 A group of men stood in front of the Confederate soldier monument at the courthouse, facing the marchers as they walked past.

Kim Fortune (at left) addresses marchers in front of the Louisa County Office Building with help from Jaime Hiter.

Raymar Byrd talks about the Confederate flag on the welcome sign on Courthouse Road (Route 208) at the corner of Elm Avenue.

Marchers make their way to the front of the Louisa County Office Building.

A group of men stood in front of the Confederate soldier monument at the courthouse, facing the marchers as they walked past.

Protestors at Saturday’s March for Unity in Louisa called for reallocating some police resources toward other community needs, recruiting more people of color for local government jobs and boards and removing Confederate symbols from public property.

The march drew more than 100 people who walked under a hot sun from Louisa Town Park to the circuit courthouse, stopping at points along the way to listen to speakers. Marchers wore masks and did their best to socially distance. Town police and county sheriff’s deputies provided support to ensure the marchers could move safely, though participants largely stayed on the sidewalks.

“When you leave today you have a job: to continue the work,” said Juanita Jo Matkins, one of the event organizers. “I’m not saying Louisa County’s leaders aren’t trying to meet the needs of all the citizens, but we’re here to remind them they must not stop working for justice and equality.”

As marchers walked, Louisa resident Jaime Hiter led them in various chants, including “Louisa Strong,” “Black Lives Matter” and “No justice, no peace.”

Kim Fortune, daughter of former Louisa County Sheriff Ashland Fortune and an employee of the state Department of Social Services, spoke in front of the county office building about the need for more people of color in county jobs and on appointed boards. She noted that 20 percent of the county’s residents are of color.

“If we want Black lives to matter, we have to start having diversity within the workplace,” she said. “We have to make sure we are being recruited and retained in the positions we are hiring for. This county, even if you are hired, will not do what it takes to retain you in a position.”

She said the county administration and sheriff’s office should be proactive in recruiting employees of color at historically Black colleges and universities, for example.

“You have a responsibility to hold them accountable,” she told the crowd. “You need to call your supervisor and ask them, ‘What’s the problem?’ You need to call the sheriff’s office and ask why there are not more minority and women officers in this county.”

Davis, the Albemarle County teacher, said he previously worked for Louisa County Public Schools. He said school systems across the country need to do more to hire African American men as teachers.

“Quality teachers of any race are valued, but for students of color, the positive impact of teachers who look like them should not be underestimated,” Davis said. “Studies show having one, especially between grades three and five, decreases the dropout rate among black male students by 30 percent and increases the likelihood of them aspiring to higher education.”

Gathers, from Charlottesville, emphasized issues involving police departments, inviting marchers to chant the names of, among others, George Floyd, the Black man killed by a police officer in Minnesota in May, and Breonna Taylor, a Black woman shot dead by police in her home in Kentucky in March.

“We need to start to look at reallocating some of the funds that go to police departments, to shift those funds toward mental health, social services, and by God we certainly need to shift some toward affordable housing,” Gathers said.

Raymar Byrd, a Louisa native who operates a nonprofit that provides outreach to at-risk youth and families, criticized the Sons of Confederate Veterans placards on the signs that greet motorists as they drive into the town of Louisa. The Confederate flag is displayed on the placards. Marchers stopped at the sign at the corner of Elm Avenue and Courthouse Road (Route 208) to hear his remarks.

“There’s some symbolism on this sign that we don’t feel is very welcoming,” Byrd said. “It does not represent what we’re here for today, which is unity and peace. “I’ve talked to many people who come to visit me, who come into our town, and they’re really skeptical and question what that represents.”

As the rally approached the Louisa Circuit Courthouse, marchers encountered a small number of counter-protesters, including three men who stood with their arms crossed in front of the Confederate soldier monument. A man and woman sat in the back of a pickup truck holding a sign that read, “All Lives Matter.”

On the courthouse steps, Terrance Reshay Robinson, a Louisa native and attorney, called for what he described as “symbols of Virginia’s slave-owning past” to be removed from the courthouse lawn and interior. He added that the Louisa County Commonwealth Attorney’s office should hire some people of color.

“So at the very least we can maintain some semblance of justice and equality, even if we are still very far from the reality,” he said.

Circuit court Judge Timothy Sanner said last year he would not make a decision on whether to remove a large portrait of Confederate Gen. Robert E. Lee from the courtroom. He said any decision on the portrait’s status should be made by the Louisa County Board of Supervisors.

A task force that includes representatives of Louisa NAACP, county government, the public schools and the sheriff's office has been meeting since early June to address some of the issues raised during the July 25 march. So far the task force has recommended buying 55 more body cameras for the sheriff's office, which the board of supervisors quickly approved.