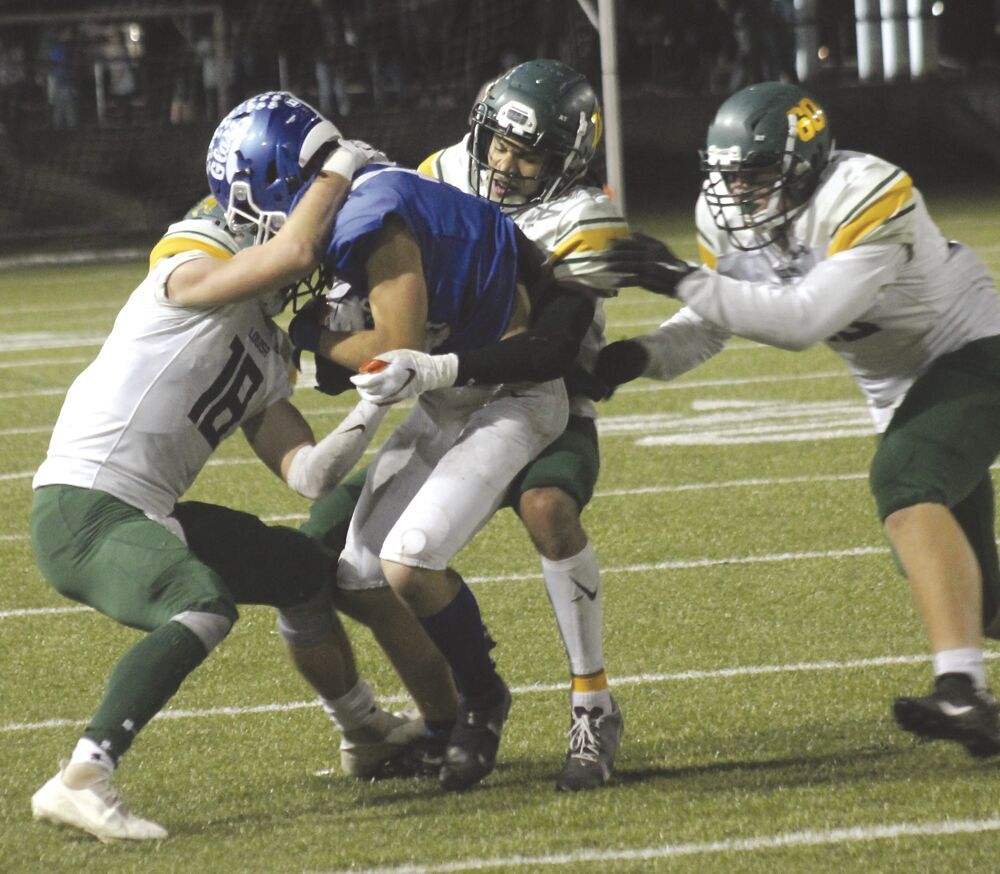 Lousia defenders Stephen Dean, Jordan Smith and Aiden Riley work together to brind down a Hilltopper runner during the Lions’ Region 4D quarterfinal game against E.C. Glass on Nov. 11. 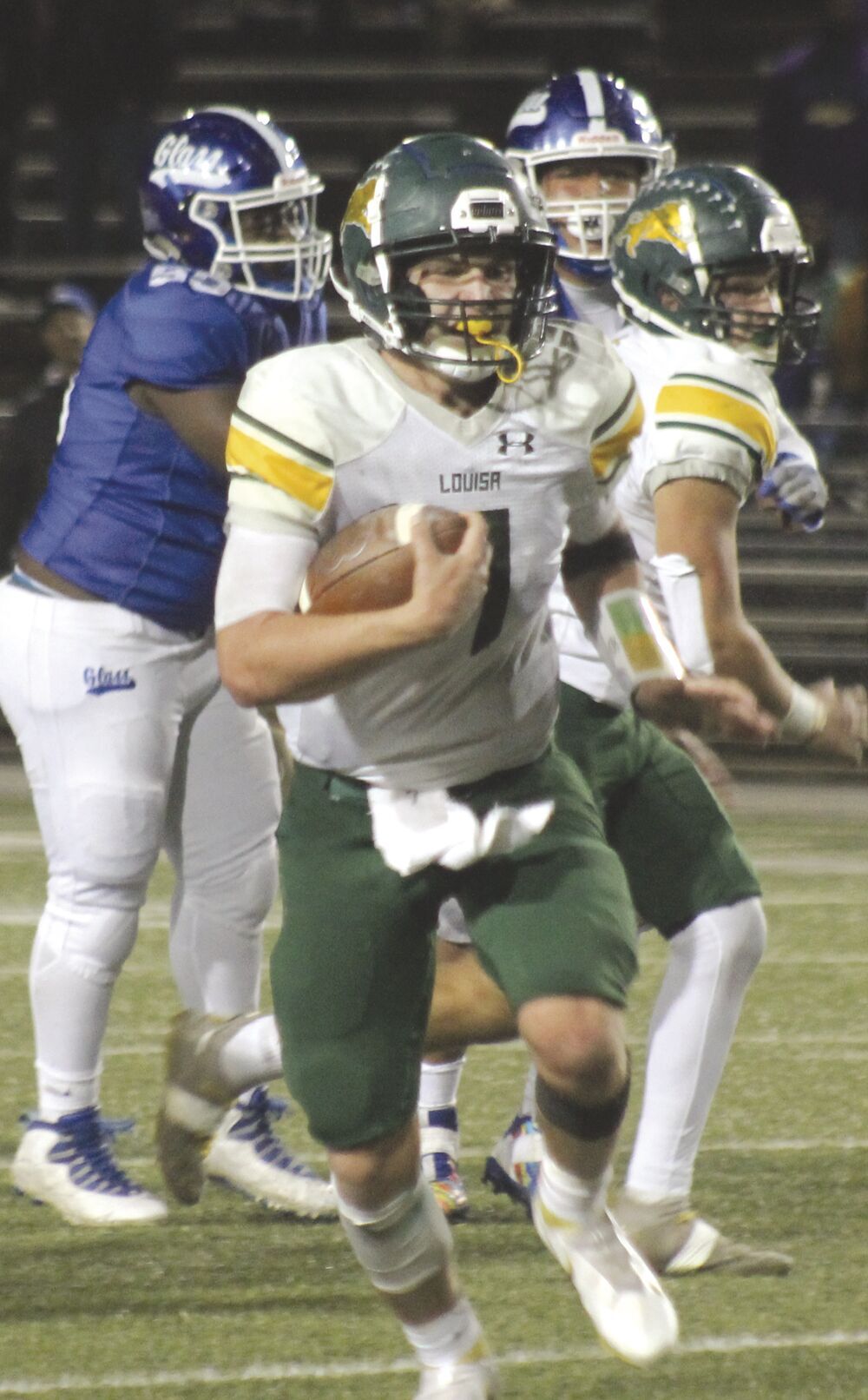 Landon Wilson carries the ball down the field for the Lions. Wilson ended the night with 268 rushing yards.

Lousia defenders Stephen Dean, Jordan Smith and Aiden Riley work together to brind down a Hilltopper runner during the Lions’ Region 4D quarterfinal game against E.C. Glass on Nov. 11.

Landon Wilson carries the ball down the field for the Lions. Wilson ended the night with 268 rushing yards.

“We were supposed to come out here and get blown out by 28 and we won by 21,” said Louisa Coach Will Patrick. “I’m the happiest coach in the world right now.”

The Lions got things started, taking the opening kickoff on their 18-yard line and starting to work their way down the field. Landon Wilson and Jordan Smith carried the ball for most of the distance down the field eating up most of the first quarter. Wilson made the final dash to the end zone from 16-yards out. Glass’s defense stripped the ball from his hands short of paydirt, but Louisa lineman Gabe Thomas dove on the loose ball in the end zone for the score.

“I’m upset that I fumbled, but the fact that a lineman scored?” Wilson said. “He’s going to remember that for the rest of his life.”

Caden Lundy put away the extra point, and the Lions were up 7-0 with 5:40 left in the first quarter.

Louisa’s defense stalled the Hilltoppers well short of the end zone, forcing a turnover on downs and giving the offense the ball on the Lions’ 33-yard line. Smith and Wilson again split the work on the ground, with Smith notching a 35-yard run to get the ball into E.C. Glass’s territory and Wilson capping the drive with an 18-yard dash for the score. Lundy put away the extra point and the Lions led 14-0 at the end of the first quarter.

The Lions attempted to add to their lead on their first possession of the second quarter, but were stopped at the 11-yard line. Lundy attempted a field goal, but the kick flew just wide of the uprights, leaving the score unchanged.

The Hilltoppers struck back this time, with quarterback George White completing a trio of passes to keep the drive alive, including a four-yard pass to Eli Wood for the touchdown. Kicker Aidan Palys put the extra point away to cut the Lions’ lead to 14-7 with 3:55 left in the half. Neither team was able to add to their score before the break.

Glass got the ball to start the second half, but didn’t hold onto it for long as the defense forced a three-and-out. Stephen Dean got a hand on the punt and Jaylen Beach pulled it down, setting Louisa up just inside Hilltopper territory. A penalty against the Lions knocked them back into their own territory before a flag on Glass’s defense moved them up to the 48. Wilson slipped through the defense on the next play, covering the 52 yards to the end zone in a single scamper. Lundy’s kick was true to boost the Lions to 21-7 with 8:19 left in the third.

The Hilltoppers cut into the Lions’ lead again on their next possession, with Mike Thomas Jr. capping a 66-yard drive with a 10-yard scoring run. Palys’ kick was good and Glass pulled to 21-14 with 4:13 left in the period.

Louisa’s next drive was cut short by an interception from Qua’Tarius Foster, but the defense kept the Hilltoppers from going anywhere with it, forcing a turnover on downs on the Louisa 37-yard line.

Smith and Wilson went to work on the ground, combining for 61 yards over nine plays to get the ball to the two-yard line. Wilson put it away from there, putting the Lions up by two scores again, 28-14 with 7:50 left in the game.

Wilson ended the night with a game-high 268 yards on the ground over 28 carries.

“Late in the game it was third and six and I called a play and he was like ‘coach I think this is better’ and I said ‘get me the first’ and he got me the first, he got me nine,” Patrick said. “He’s just a gamer, a football player, I love that kid to death.”

Smith also had a stellar night on the ground, adding 94 yards over 14 carries. Austin Talley added another 35 rushing yards over six carries.

The final nail in the coffin came on the first play of Glass’s next possession. Dean snagged a pass from White and took it 19 yards back down the field for a pick-six.

“I thought it was going to be a run, but as soon as I saw it wasn’t I had to get a drop,” Dean said. “I saw someone leak out and I tried to get on him. It was too easy, honestly. When I caught it, I knew I was gone.”

The Hilltoppers made one last effort to get more points on the board, with White hurling a third-down pass deep into Louisa territory. Wilson came down with the interception on the two-yard line, giving the Lions the ball back with 4:45 left on the clock. They didn’t give it up, running out the clock for the victory.

“Our defense, we had a good game plan and they’re so dynamic so you have to be able to stop their passing game and they have some fast running backs but the energy on this team is just different,” Patrick said. “They don’t have the most talent (of any team he’s coached) but they have the most heart of any team I’ve ever coached.”

The Lions hit the road again this week, traveling to Salem to face the Spartans for the Region 4D semifinal game. Kickoff is scheduled for 7 p.m. Anyone unable to attend can listen to a live broadcast of the action through the LCPS Athletics YouTube channel, with commentary by Tommy Nelson and Dicky Purcell beginning at 6:45 p.m.

LETTER TO THE EDITOR: Things to be thankful for

LETTER TO THE EDITOR: Credit COVID bill for broadband $$

LETTER TO THE EDITOR: Resident displeased with Mineral town attorney

Every so often, I tell Rick, “I have an idea.” According to my husband, these simple words give him cold chills. You see, Rick is a man who loves his daily routine. He enjoys knowing what to expect and changes are not, shall we say, welcomed with open arms. Am I about to tell him that I want to host an event in our home, go visit my mother, or move the furniture around? He doesn’t know what’s coming, but he is always confident that his routine is about to be rocked in one way or another. Read more

What in the world is more fun than a Christmas parade? Well, dear readers, I’m here to tell you that the answer is TWO Christmas parades, on the very same Saturday! I saw the first parade at noon in beautiful downtown Louisa, and the second at 5 p.m. in Spring Creek at Zion Crossroads. Want to know more? Read on! Read more