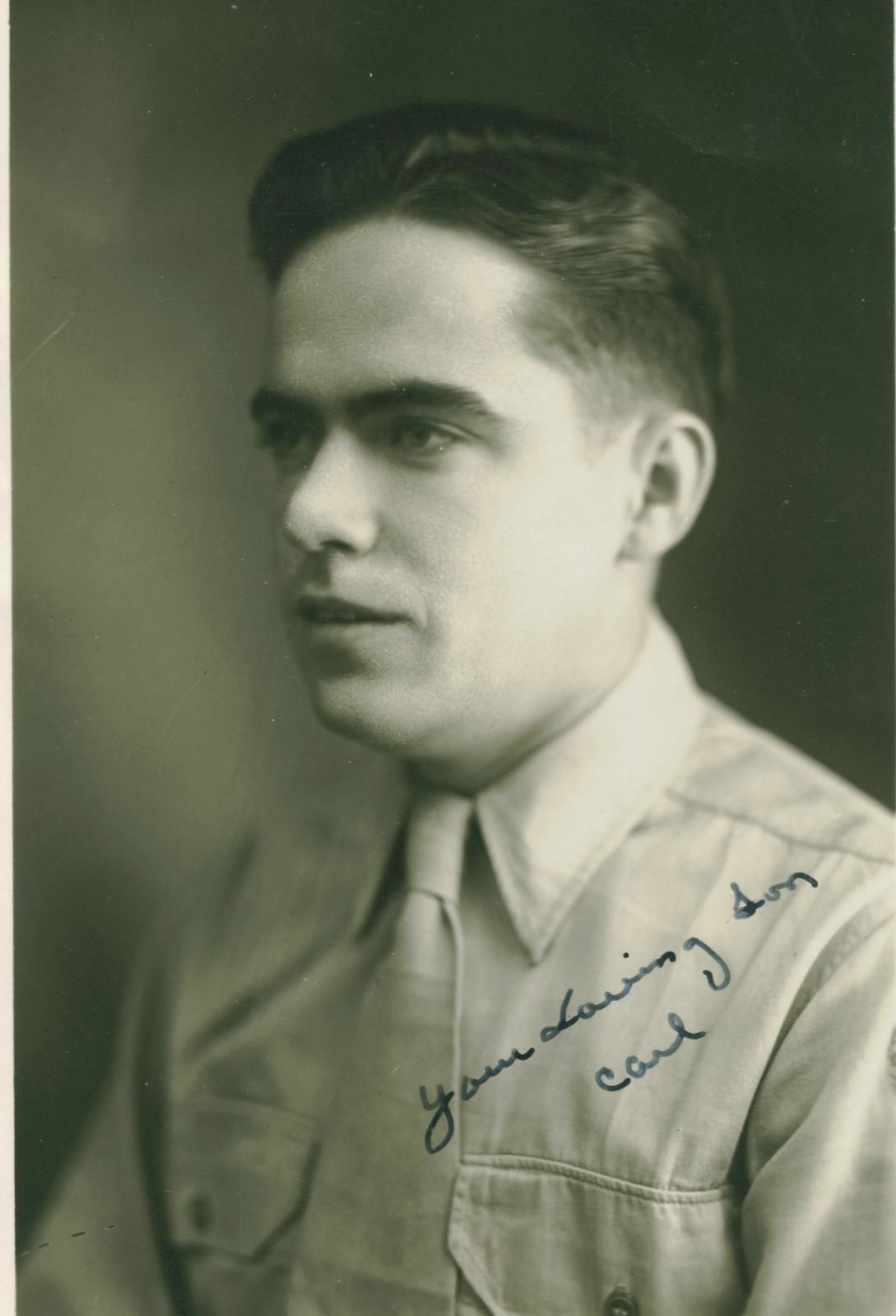 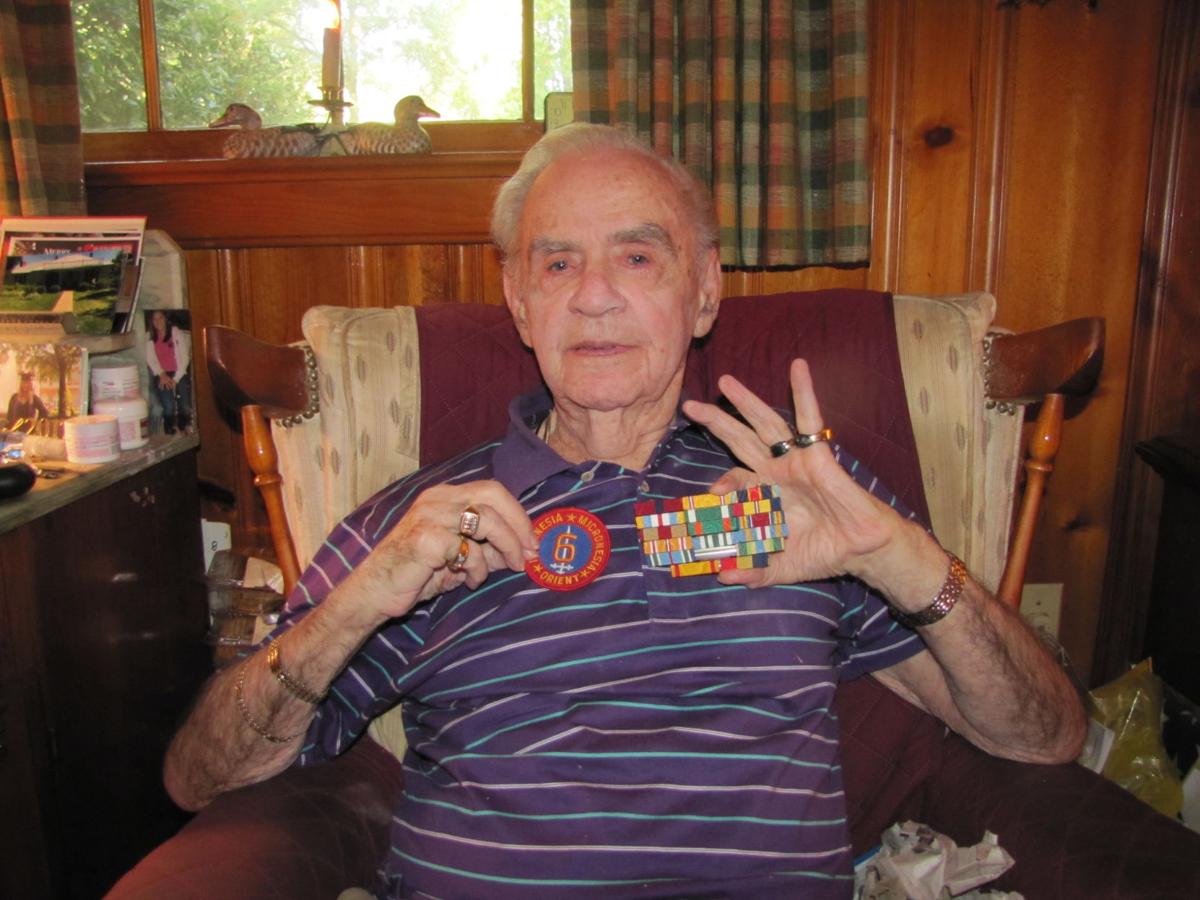 Without any political connections, the young men of the Louisa County High School Class of 1943 had a good idea what awaited them. As the war raged in Europe and the Pacific, it was a certainty that any healthy 18-year-old would be drafted.

Such was the status of Carl Wills Harlow of Bells Crossroads. Carl’s father had faced the same fate, having fought in combat in Germany during World War I, serving in the army.

Carl’s great-grandfather had served in the 56th Virginia, Company C Confederate infantry regiment from Louisa, and barely escaped death after being shot through the hip at Chester Station in June of 1864, disabling him for life.  So after high school, Carl thought it would be wise to enlist in the Navy.

Carl was born on October 21, 1924 to Henry Clay and Annie White Harlow. He grew up on the White family’s old home place less than a mile from Bells Crossroads. He was joined there by his sister Ernelle “Sissy” and brother Henry Clay Jr. Carl took his Harlow cousins’ advice; they warned him if he ever learned how to milk a cow, he would be doomed to doing this for life. Carl always pretended not to know how.

Having passed his physical, Carl was ready to be sworn into the Navy in October 1943 along with fellow Louisa native Harry Lumsden, who became the county treasurer many years later. To their surprise, a Marine Corps Master Sergeant entered the room to advise them that it was customary for the Marines to take some of the Navy recruits.

The sergeant asked for volunteers. As could be expected, there were none and the sergeant began to call out names. Number three was Harry Lumsden, and Carl laughed at Harry. A few names later and Carl was joining Harry on the way to the Marine headquarters. Here they were sworn in, given a Marine Corps emblem to wear and a thirty day pass and told to report back to Richmond to catch the train after their leave.  Carl’s mother was so glad to see her son return home and was thankful that he did not have to serve. The joy was short-lived, as Carl explained he was now a Marine.

The train left Richmond and at 11 p.m. arrived in Yemassee, South Carolina. Here a Marine sergeant threw ponchos at them in a torrential rain. The young men didn’t know what to do, having never seen a poncho before, and the sergeant told the dumbfounded teenagers to just stand there and get wet. They soon figured them out.

Carl and Harry went through basic training together at Parris Island but soon separated. Carl found himself in a cushy job at Camp Lejeune, North Carolina as the chief cook on the night watch, every third night.  Marines there were soon told of an elite unit being formed, the 29th Marine Regiment of the 6th Marine Division. Carl calls himself dumb for volunteering. The next week, riding in Pullman coaches on a train, eating in the dining car, and having his bed made for him, Carl arrived in San Diego.

After 30 days on a troop ship, disembarking down a rope ladder, Carl found himself at U.S. bases on Guadalcanal, then Iwo Jima, and finally landed above Naha, Okinawa on April Fools Day, 1945.

The 6th Marine Division was assigned to take the north of the island, and the Army would take the south near Naha, the capital. Carl was thankful that they were now equipped with M1 Garand rifles, which were much better than earlier Marines had.

To the Marines’ surprise, having secured the north of the island; they were soon marching south as they met the Army marching north along the same road. The Marines had no kind words for the Army, calling them “yellow” among other worse names.

Soon, in some of the most intense fighting of the war, the Marines found themselves bogged down at Sugar Loaf Hill. Of the soldiers in Carl’s company when they first arrived at Okinawa, only 18 were left after the fighting ended and the U.S. took Sugar Loaf Hill on May 18, 1945. The dead and wounded soldiers were replaced by others.

It took many frontal assaults to overtake the Japanese entrenched in caves. Carl relates that the Navy Corpsmen would only last about a day before being killed while tending to the exposed, wounded Marines.  Carl spent over 100 days in combat, getting used to the shells going overhead.

He recalls that “the ones you hear, you don’t worry about. It’s the one you don’t hear” that gets you.

On a daily basis, the Seabees (Navy construction battalions) built bridges over the Naha River, only to have the Japanese destroy them with shells the next day.

About 12,500 U.S. soldiers were killed on Okinawa, with over 36,000 casualties. The number of deaths among the Japanese was about 110,000. As many as 150,000 native Okinawans out of the population of 400,000 also died. Many committed suicide, either forced to do so by the Japanese or because the Japanese warned them of their impending fate if the Americans won the battle.

After Okinawa, the 29th Marines boarded ships to Guam, preparing for the invasion of Japan. Every Sunday they would go down to the Seabees’ location to get ice cream.

“The Seabees always had everything,” Carl remembers.

When word came that the war was over, Guam was lit up and the booze flowed, but Carl did not drink. Having endured the 110-degree-plus heat, the 6th Marine Division was sent to Tsingtao, China for the official Japanese surrender.

Arriving in China, they found six inches of snow awaiting them. The 29th regiment would stay there for six months, and now Sergeant Harlow’s weekly ration of six cans of beer was sold for one dollar a can, since he did not drink or smoke, and his weekly carton of cigarettes fetched $100.

Boarding the USS Butler, Carl finally arrived in San Francisco. The return trip to the East Coast was not in Pullman cars, but instead in freight cars that were covered in diesel smoke when the train went through tunnels.

At Bainbridge, Maryland, Carl was given the chance to stay in the Marines. He declined. He was offered the dental services to fix any tooth problems, but Carl refused, as he believed “the Marine dentist had been a plumber” in an earlier career.  Before leaving, Carl joined the 52/50 club, which paid him $50 a week for a year. It was a good income in 1946.

Carl was one of the lucky men from Louisa to have survived the war. There were at least 21 men from Louisa who were killed, and many more wounded severely, losing limbs and suffering from what today we know as post traumatic stress disorder.

Carl married his sweetheart, Doris Proffitt of Mineral, on June 20, 1946. They would have 54 years of happy marriage before her passing in 2001. Carl had a very successful career with United Insurance Company of Chicago, with 19 district managers and 500 salesmen under him.

Today Carl is the oldest member of Macedonia United Methodist Church in Louisa and the Veterans of Foreign Wars Post 6364 in Richmond, near his home. He still drives himself and works out on a cross-trainer. Unlike athletes or pop stars, Carl is a true hero from Louisa County who survived through the grace of God to live a wonderful life. Happy Birthday, Carl.