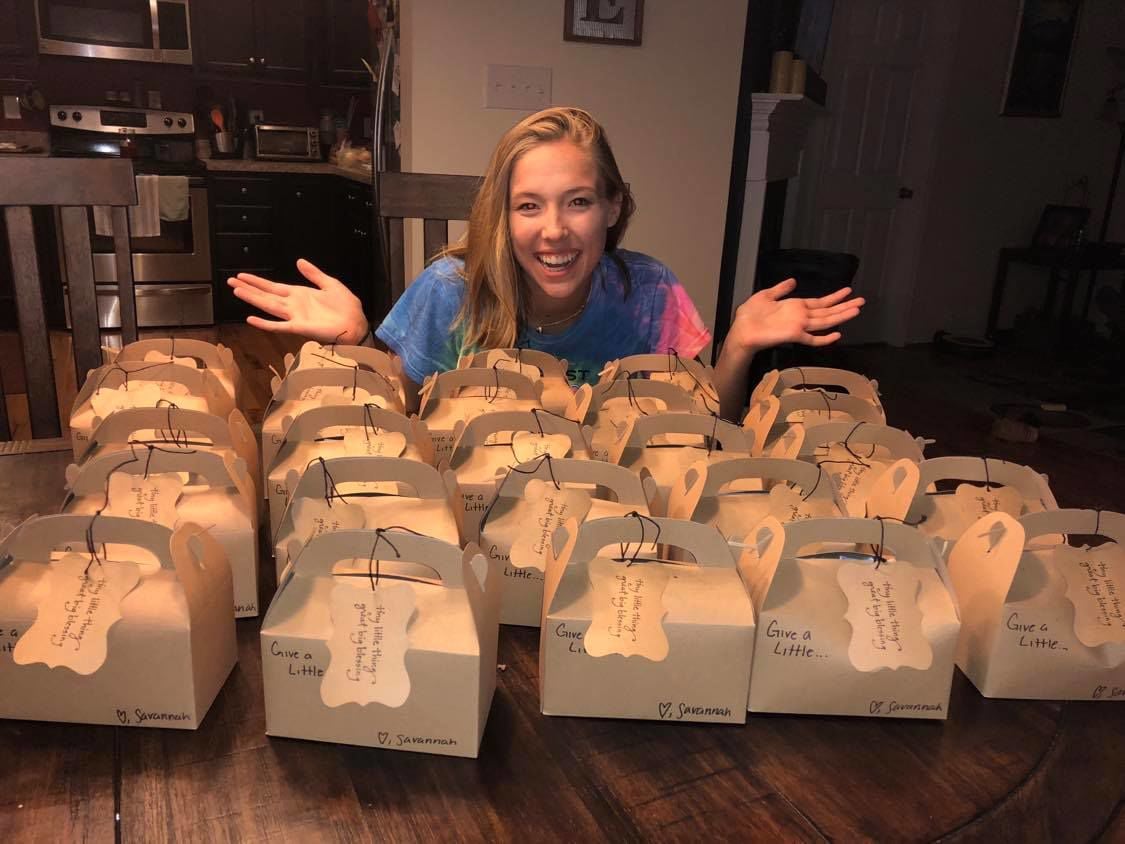 Recent Louisa County High School graduate Savannah Marcum with some of the care packages she prepared to deliver to families staying at Ronald McDonald houses in Richmond and elsewhere. Marcum began her Give a Little project when she was 14 and has now distributed some 600 of the boxes. 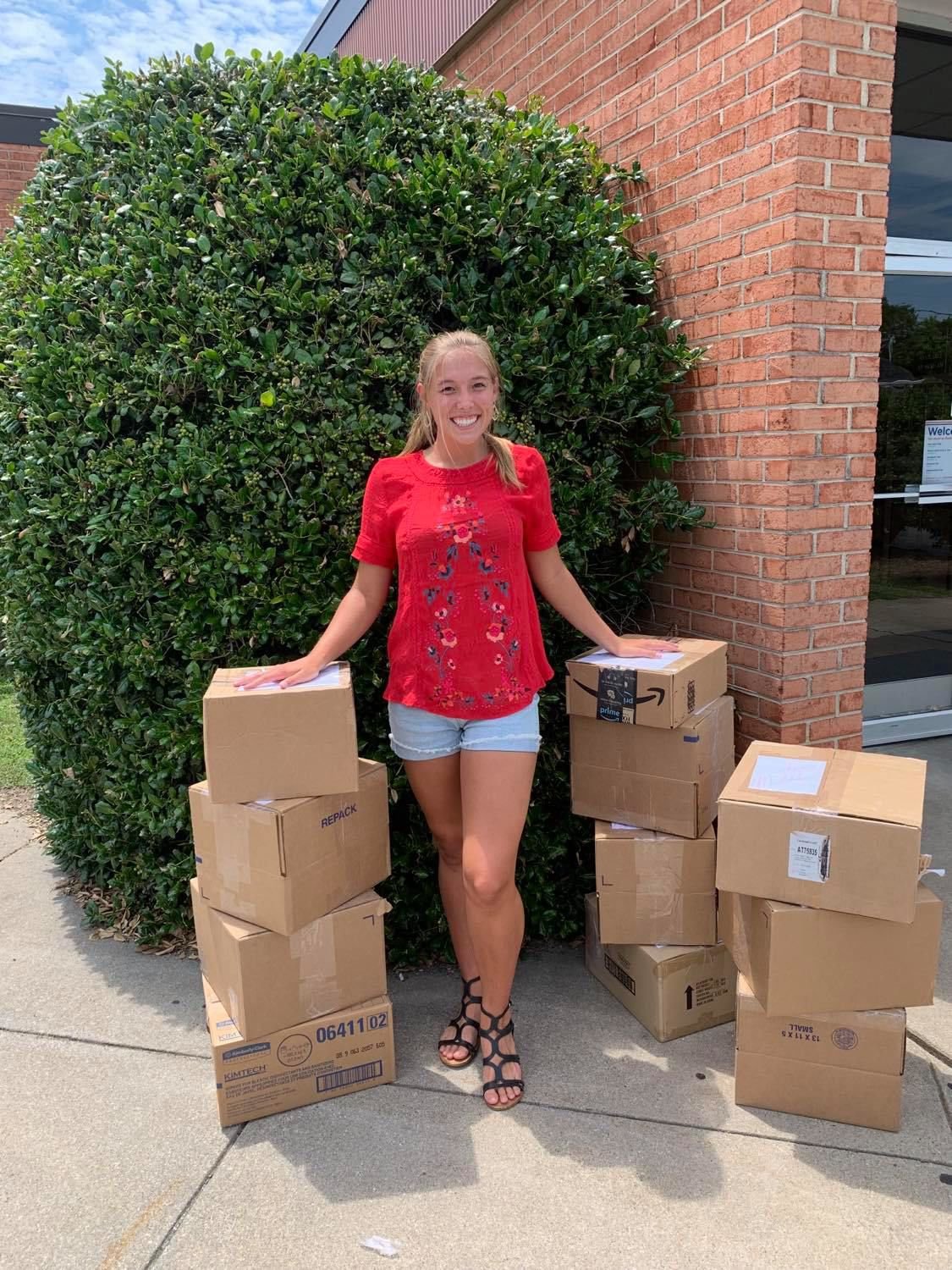 Marcum’s interest in Ronald McDonald houses, where families stay while their children undergo medical treatment at nearby hospitals, is personal. Members of her family stayed at one of the houses before she was born. 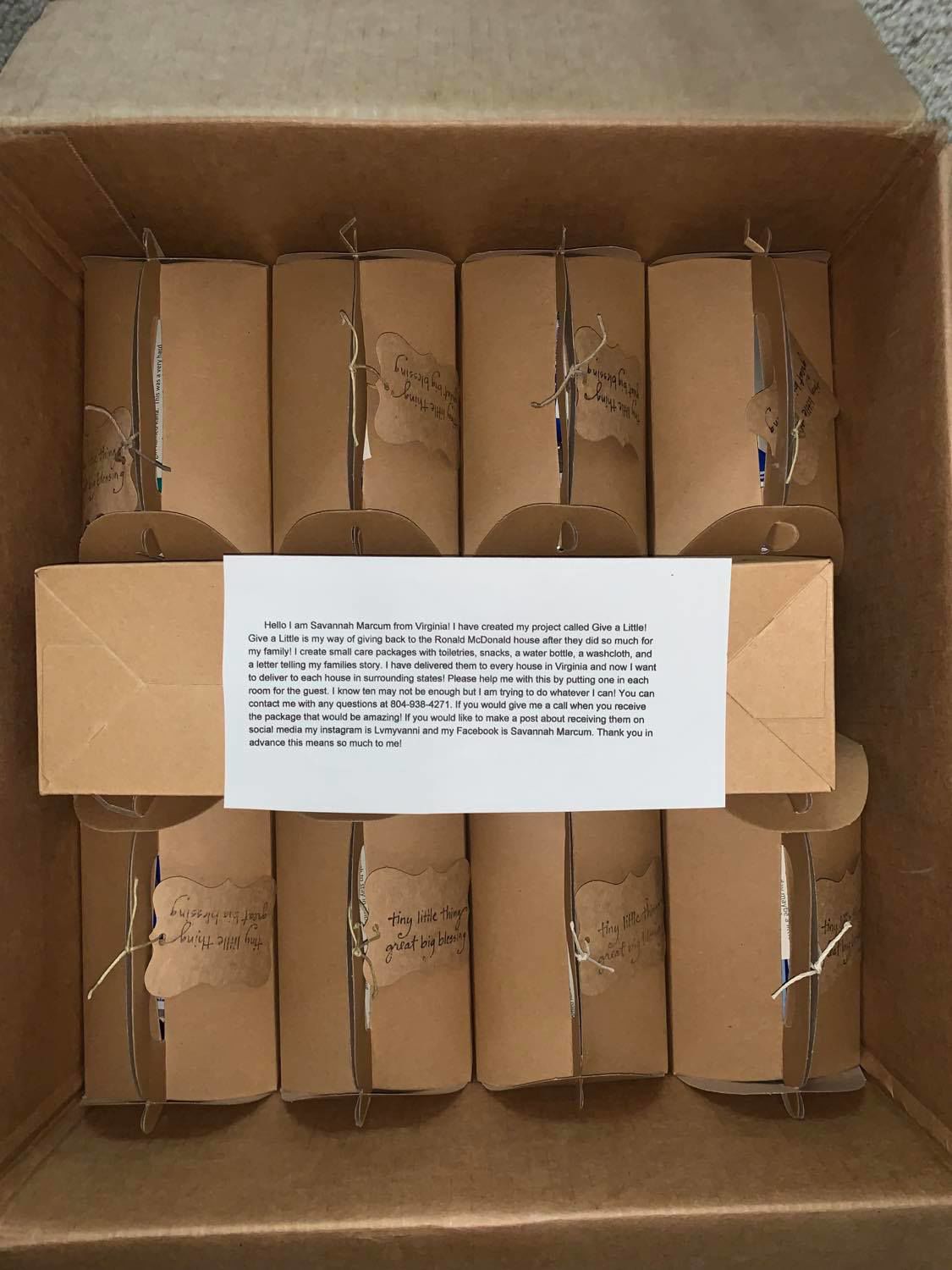 Recent Louisa County High School graduate Savannah Marcum with some of the care packages she prepared to deliver to families staying at Ronald McDonald houses in Richmond and elsewhere. Marcum began her Give a Little project when she was 14 and has now distributed some 600 of the boxes.

Marcum’s interest in Ronald McDonald houses, where families stay while their children undergo medical treatment at nearby hospitals, is personal. Members of her family stayed at one of the houses before she was born.

Perhaps it’s overstating it to say that members of Generation Z, which includes the class of 2020, want to give more of themselves than the generations that preceded them.

But if Savannah Marcum’s recent work is any indication, the charitable image may be well-deserved.

Marcum, who graduated with her Louisa County High School classmates this month, developed an interest in giving when she started competing in pageants at age 14. Her mother helped her start a Facebook page to promote Give a Little, Marcum’s name for her project. Her idea was to gather toiletries, washcloths and snacks in boxes to give to family members staying at Ronald McDonald houses while their children undergo medical treatment at nearby hospitals.

At first Marcum spent some money out of her own pocket to pay for the boxes. Then she decided to start raising money in the community. She and her mother and a few friends would make peanut butter eggs to sell at Halloween, for example. As Marcum was crowned Miss Louisa Agricultural Fair, the fair committee arranged for some of the receipts from sales of baked goods and art to be donated to the cause.

“We raised a ton of money,” she said. “I really couldn’t have done this without the community’s support.”

A ton is right. She’s raised some $6,000 to date to support families staying at the houses in multiple states. Marcum estimates she’s sent out 600 boxes over the past four years.

Each of the boxes has a value of about $8, Marcum said. One of the biggest expenses is the cost of mailing the boxes.

Marcum has been to some of the houses, like the one in Richmond, to meet families staying there. She recalls one couple that came from overseas and stayed there for an extended period while their daughter was in the hospital.

“Sometimes I’ll get handwritten letters in response from someone staying at one of the houses,” she said. “It really impacts the families on a personal level.”

The effort is personal for Marcum, too. Before she was born, her mother had a child named Kaila who was born with a rare genetic condition, Trisomy-13. Family members stayed at a Ronald McDonald House while Kaila received treatment. Most children who have the condition don’t survive; Kaila passed away when she was four months old.

“Kaila has made a big impact on my life,” Marcum said.

This fall Marcum will enroll at Virginia Commonwealth University to study pre-dental hygiene. She hopes to carry on with the Give a Little project once she gets settled there.