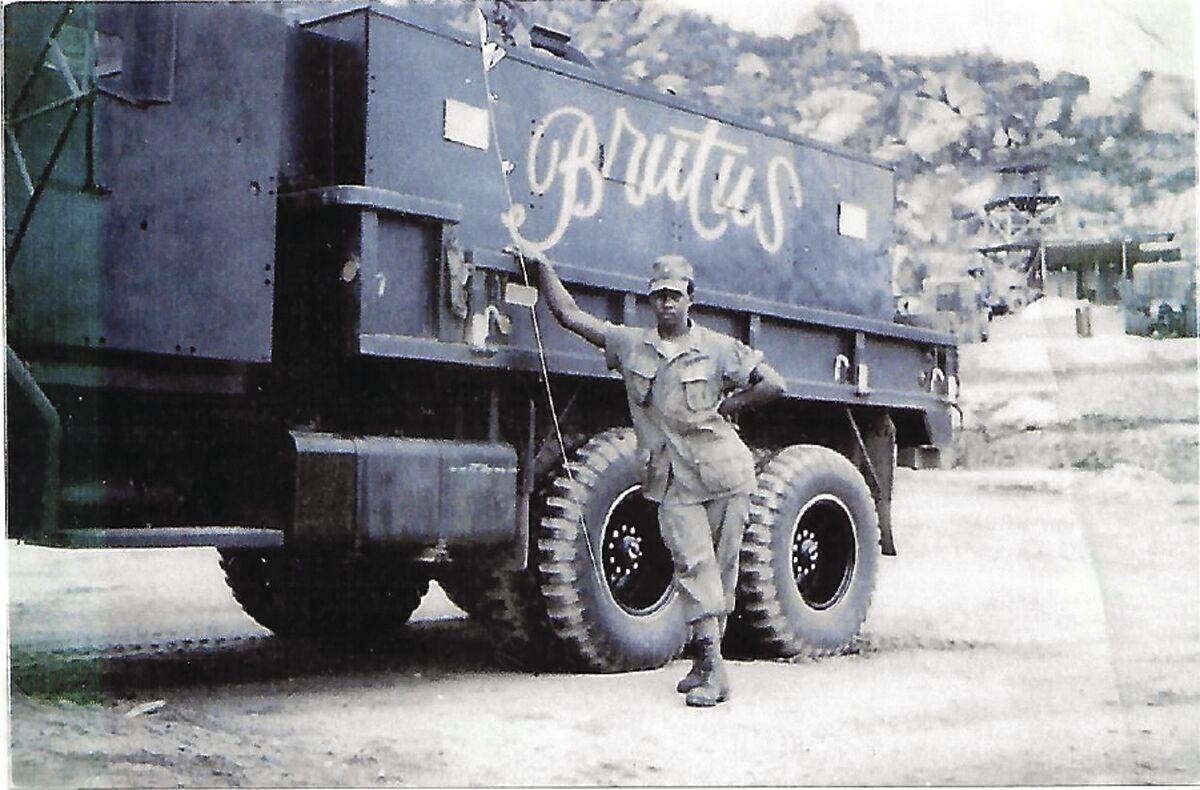 Ronald Mallory stands by the gun truck, nicknamed Brutus, that he drove during the Vietnam War. On Feb. 23, 1971, he successfully turned the truck around, pushing a burning fuel tanker out of the way, to get his injured crew to safety while under enemy fire. 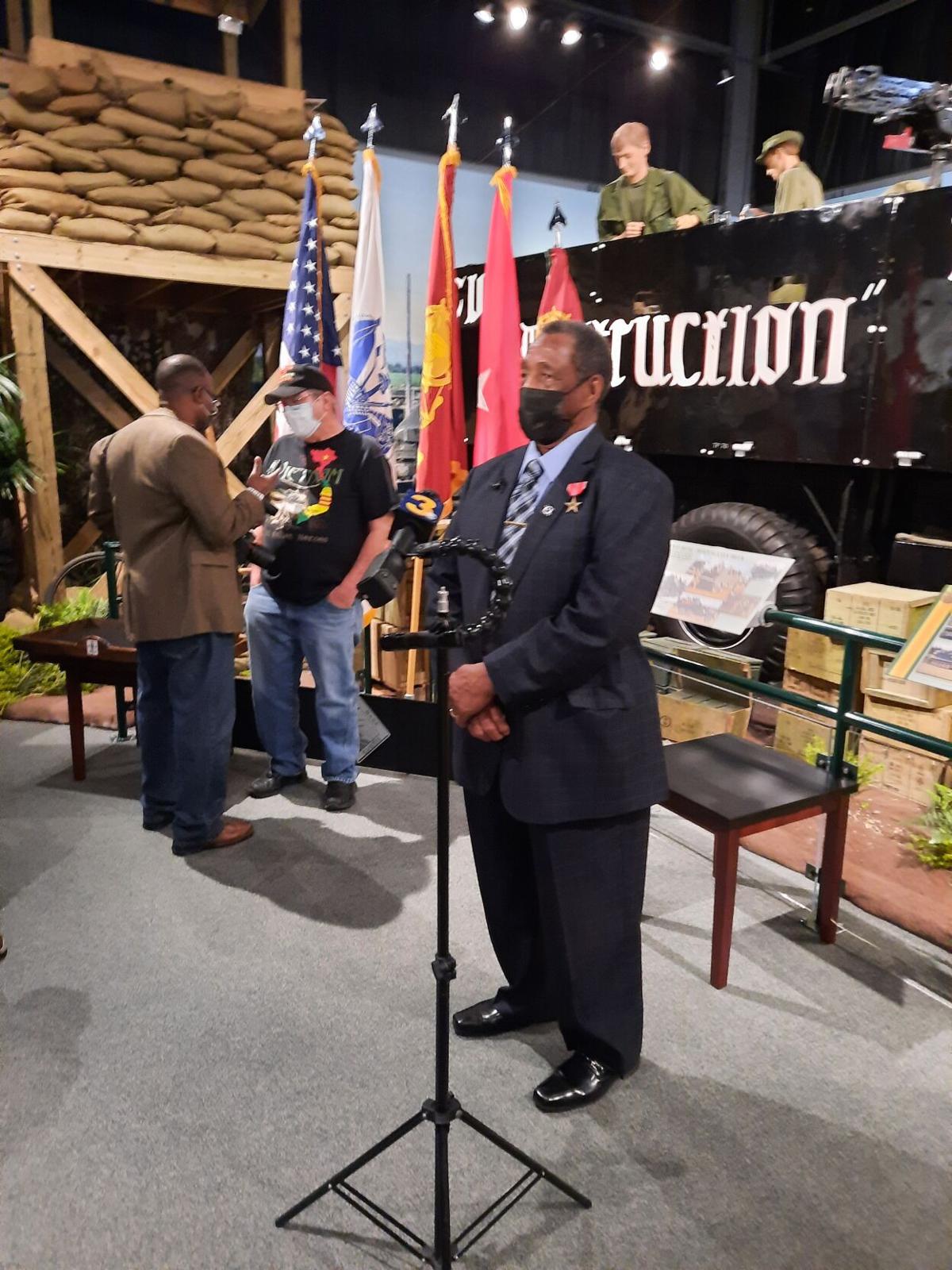 Mallory at the Bronze Star Medal award ceremony at Fort Eustis on March 4. The U.S. Army awarded him the medal 50 years after his heroic actions in Vietnam. 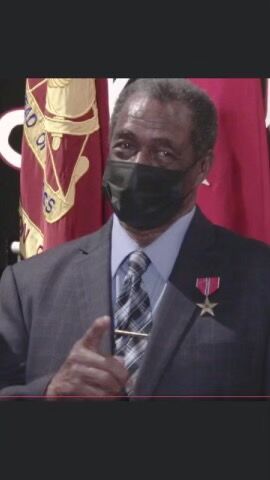 Ron Mallory gestures during the ceremony at Fort Eustis.

Ronald Mallory stands by the gun truck, nicknamed Brutus, that he drove during the Vietnam War. On Feb. 23, 1971, he successfully turned the truck around, pushing a burning fuel tanker out of the way, to get his injured crew to safety while under enemy fire.

Mallory at the Bronze Star Medal award ceremony at Fort Eustis on March 4. The U.S. Army awarded him the medal 50 years after his heroic actions in Vietnam.

Ron Mallory gestures during the ceremony at Fort Eustis.

On March 4, Mineral resident Ronald Mallory was awarded the Bronze Star Medal with a “V” device, signifying an act of valor in combat, at a ceremony at the U.S. Army Transportation Museum at Fort Eustis.

This medal and “V” device were awarded to Mallory for his actions on February 23, 1971, which saved the lives of two of his three crew members on a gun truck during the Vietnam War.

“I was still in disbelief [when I received the award],” Mallory said. “I never really thought I would be getting it after 50 years.”

Mallory was 19 years old when he was drafted to join the Army in 1970. Shortly after completing boot camp training at Fort Campbell, he received orders to join the 359th Transportation Company along with airline tickets to what was then called the Republic of South Vietnam.

“I was scared and didn’t really want to go,” Mallory recalled.

The 359th’s mission was to transport fuel to other units in and around Pleiku, a city in the highlands of Central Vietnam. To do this, convoys had to make the harrowing journey on the QL 19, which some called “the most dangerous road in all of Vietnam,” over the An Khe Pass.

Resupply trucks carried different types of fuel, including JP4 for helicopters and jets, avgas for planes, diesel for tanks and trucks, and regular gas.

The fuel convoys moved slowly as they maneuvered through the mountain pass, making them vulnerable to attacks by the Viet Cong and North Vietnamese Army troops.

'I think it's gross': Katie Hill on Gaetz using her name in op-ed

NRA CEO says he needed to take shelter on a yacht

“You got shot at every day,” Mallory said.

He started out driving tractors that pulled 5,000-gallon tankers of fuel and befriended the crew on Brutus, one of the gun trucks that accompanied the convoys as protection. When the truck’s driver was killed in an ambush, Mallory volunteered to take his place.

On that February day, two convoys began their journey over the pass to Pleiku. The first convoy was attacked in an ambush, and the gun trucks protecting the second convoy, including Brutus, were given orders to join the battle. About 15 minutes after the additional gun trucks entered the kill zone, the fighting died down and a ceasefire was called.

Shortly after, Mallory was told to turn around and rejoin the second convoy. Suddenly, a small group of enemy soldiers attacked Brutus and threw a grenade into the gun box. Larry Dahl, one of the crew members, covered the grenade with his body, sacrificing himself to save the others. Two other members sustained injuries from shrapnel and needed medical attention.

While under direct enemy gunfire, Mallory acted without hesitation; he successfully turned the gun truck around, pushing a burning tanker out of the way, to get his injured crew to safety.

“His [Mallory’s] brave actions not only saved the lives of two of the three crew members in the gun box, but also prevented the enemy from destroying his gun truck,” according to the citation that accompanies the Bronze Star Medal award. “His bravery and professionalism is in keeping with the highest traditions of military service and reflects great credit upon himself, his unit, and the United States Army.”

Mallory does not like to recall the events of that day and never told anyone what happened.

“Through the years, it’s been hard because I kept it in and to myself,” he said. “Nobody really knew what I did … Now, it’s out. The world knows now and I feel better, like a big brick has been lifted off of me.”