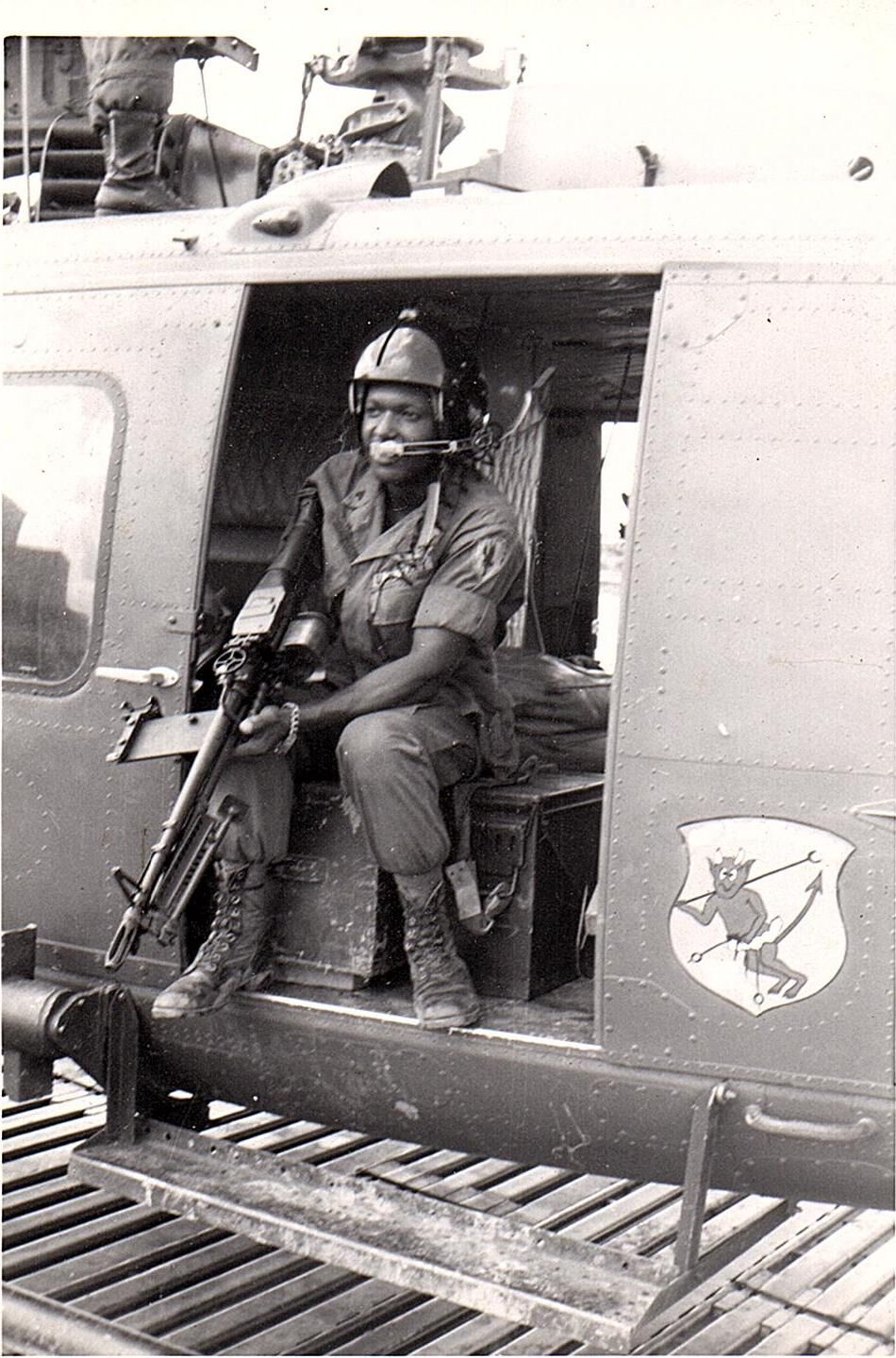 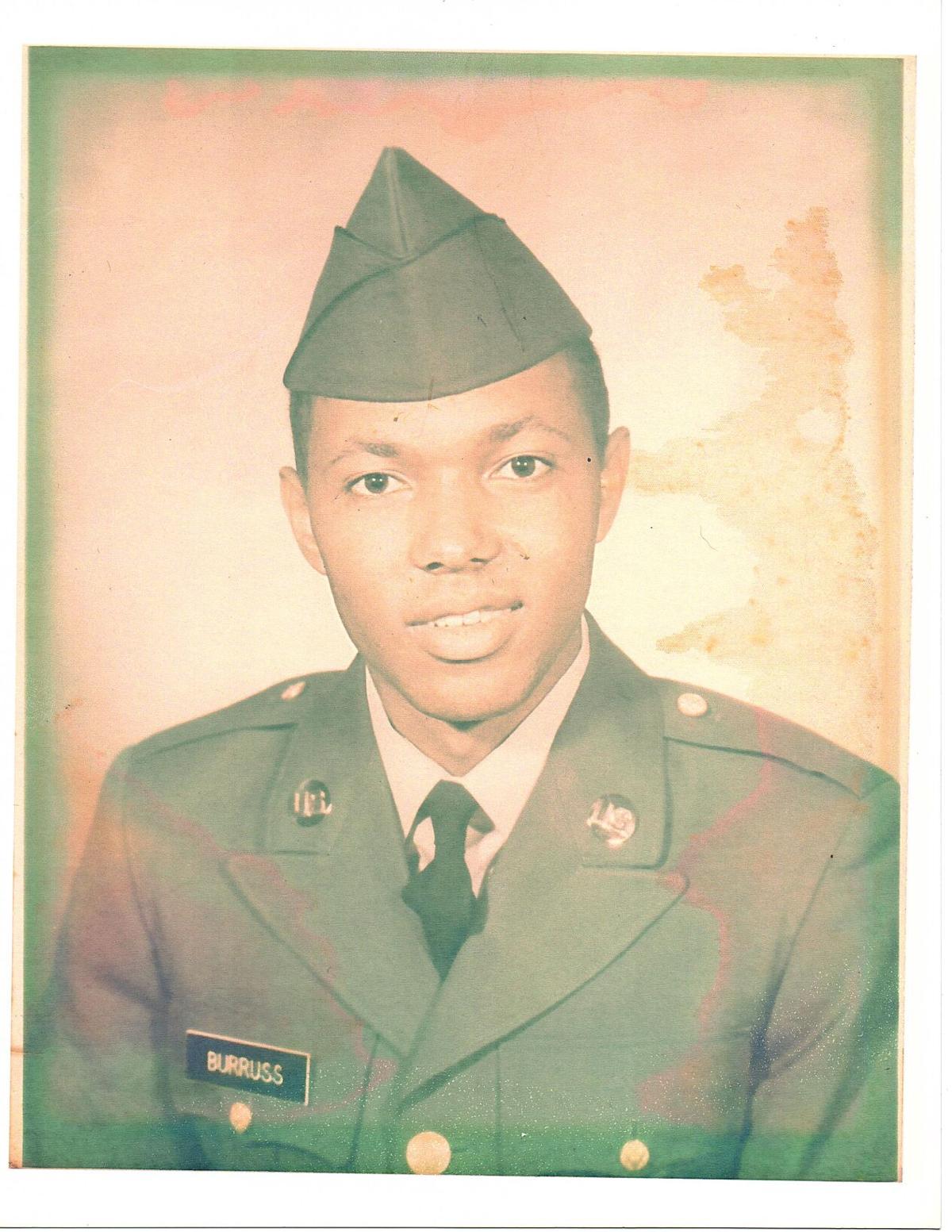 One can hardly imagine the sick feeling of newlyweds Charles Burruss and his bride Rosetta Smith Burruss when Charles’ draft notice gave him only 11 days before he had to report for duty. Having just married, the somber date of Jan. 21, 1970 had to seem like a bad dream, especially in the middle of the Vietnam War.

Charles was born Dec. 30, 1949 to Russell C. Burruss, Sr. and Viola Easton Burruss. He was the baby of the family, having seven older sisters and five brothers. Life on Evergreen Road, then known only as Rt. 626, was simple. Everyone raised their gardens along with hogs for meat to feed their families. Charles especially liked his father’s horses; the responsibilities of caring for the animals and working hard were instilled in the family by his father and mother. Charles has lived by his father’s advice: “If you want something you have to work for it.”

School was just at the south end of Rt. 626 near Rt. 250 in the cinder block Ferncliff School. Each morning the wood stoves had to be started to keep warm, and there were two classes to each room. Of course, summer meant no air conditioning, as was the case in all Louisa schools at the time.

After the seventh grade Charles went to A.G. Richardson High School, where he graduated in 1968. Leaving Louisa, Charles went to work for Tenney Engineering in New Jersey, where he worked for one year until the dreaded draft notice arrived, spoiling his and Rosetta’s honeymoon.

The bus trip from the town of Louisa to Richmond and then on to the U.S. Army base at Ft. Campbell, Kentucky took from 6 a.m. until almost twilight on the first day. Here Charles went through basic training.

Then it was on to Ft. Polk, Louisiana for 12 more weeks of training. Rosetta, pregnant with their first child, joined him. Ft. Polk was known to be the last step before Vietnam, for here the training in the humid swamp land was the perfect preparation.

Charles devised a plan; he would sign up for the airborne and non-commissioned officer schools at another military base. But Rosetta couldn’t fly because she was pregnant, so Charles’ orders were canceled and it was clear he was headed for Vietnam. Charles and Rosetta did go back to Louisa after the birth of Charles Jr. for a 15-day layover. Then Charles flew from Charlottesville to Dulles Airport, then to Oakland, California, Okinawa, and finally landed at Long Binh, Vietnam. He was stationed at Vinh Long.

Tragedy then struck the family. Charles had two brothers in the Army ­— Joseph was in Germany and Kenneth in Korea. It was the Army’s practice to avoid placing two brothers in a war zone together. Knowing that Charles had a wife and newborn son, Kenneth, who was unmarried, volunteered to replace Charles so he could go home, and the Army agreed. But as Kenneth disembarked from his flight in Vietnam, the airfield was attacked by the enemy with artillery. Kenneth was gravely wounded in the attack and was unable to replace Charles. Instead, Kenneth was medevaced back to the U.S., and Charles remained.

Charles was first assigned to the famous 1st Calvary Division. Upon their partial withdrawal from Vietnam, he was assigned to the 7th Armored Squadron of the 1st Air Cavalry Regiment. The cavalry conducted tactical missions. When a helicopter was shot down, it was their job to secure the area and rescue the crew before the enemy could get to them. Charles noted this was seldom possible, as the enemy got there first most of the time. By the time the cavalry arrived, the enemy held the area and used the weapons and plentiful ammunition found on the crashed helicopters against them.

The first month in Vietnam was just learning how to survive. Deployment to the sites was usually in “Huey” (Bell UH-1H Iroquois) helicopters, known to the men as “slicks” due to the lack of weapons on board. The helicopters would carry eight to 10 of the 1st Air Cavalry soldiers. Sometimes there would be as many as four “Hueys” sent out, with the men sitting in the open doors, feet hanging out. Upon occasion they would be deployed in the larger Chinook (Boeing CH-47) helicopters, with between 30 and 60 men. When they arrived, the helicopters hovered just off the ground and the men jumped out.

Charles remembers well an instance when he almost lost his life. He was first out of the copter in what looked like a rice paddy that should not have been very deep. Not very deep turned out to be up to his shoulders. He didn’t know how to swim, so if it had been any deeper, that would have been the end.  With Charles’ feet mired in mud, fully bogged down with all of his equipment, a 6’5” soldier appropriately named Sampson pulled the much shorter Charles out of the muck and saved his life.

One of the worst firefights Charles faced still sticks with him. On Jan. 16, 1971, a Chinook was deployed, taking the men out for 45 minutes, refueling, then dropping them at the base of a hill in Chau Doc Province where a downed chopper had crashed atop the hill. Never before had Charles smelled so much burnt gunpowder in the air as he left the Chinook.

The Viet Cong were waiting on the hill for the Americans. In the dark with small arms fire and Claymore mines that had been captured and set up by the V.C., there was no way to reach the site. It was only after airstrikes that they reached the wreckage, where they found all of the Americans dead.

Especially painful for Charles in this firefight was the loss of his best friend in Vietnam, 26-year-old Paul Darby of New Orleans; it is a painful reminder of the cost of Vietnam.

Charles would eventually be promoted to the rank of sergeant and would lead a squad of eight men.

Many times the 1st Air Cavalry, known as the “Blackhawks,” would set up ambushes, and often during the monsoon season, staying in the field for four to five days. The monsoons and the heat one could live with; it was the fear of not knowing what was coming that ate at the soldiers. The first time being fired upon was the scariest feeling, according to Charles. But it later became a feeling of boredom to set up ambushes and have no results; the soldiers felt as if they had wasted their energy and wanted the ambushes to be effective.

Charles was the lucky recipient of what he said was the greatest gift: A fellow soldier whose time ran out gave him an air mattress that could be blown up to sleep on during a monsoon, keeping him off the ground.  He folded it up and carried it in his pack. When he left Vietnam he passed it onto another lucky Blackhawk.

During the war, the Blackhawks would lose a total of 83 soldiers killed in action, with many more wounded.

Charles’ time in Vietnam ended, although not the painful memories, with his return to the U.S. Charles’ sister Gloria picked him up at the airport and he surprised his family. Rosetta was visiting her family in the Shannon Hill community and did not even know Charles was coming in that day.

Charles went to work with Stone and Webster at North Anna Power Station. That job didn’t suit him, so he took courses in electronics, something that had always interested him, and was hired by VEPCO, also at North Anna. But he did not like the fact that the job entailed being around radiation. In 1978 he opened 3C Electronics, just east of Zion Crossroads, where he repaired TVs, radios, satellite dishes, and other devices.

With the birth of three more sons after Charles Jr. — Chad, born in 1972; Travis, known as Scottie, in 1978; and Champ, in 1980 — the business changed its name to Burruss and Sons to reflect his business partners.

Today Charles and Rosetta have been married 50 years and have nine grandchildren and five great-grandchildren.  The family’s home church is Foster Creek Baptist, where each year with the help of Fork Union Military Academy Charles organizes an annual Veterans Day program to which any veteran is invited.

Many young people today refer to athletes as their heroes, but they have done nothing that can ever compare to what Charles and other veterans have done and sacrificed. We hope all of our veterans will have a great Veterans Day as we remember them.

Back to Louisa after a tour in Vietnam

For young men of draft age, 1964 marked a change in where they would be deployed. Military service for the previous decade had meant not being…