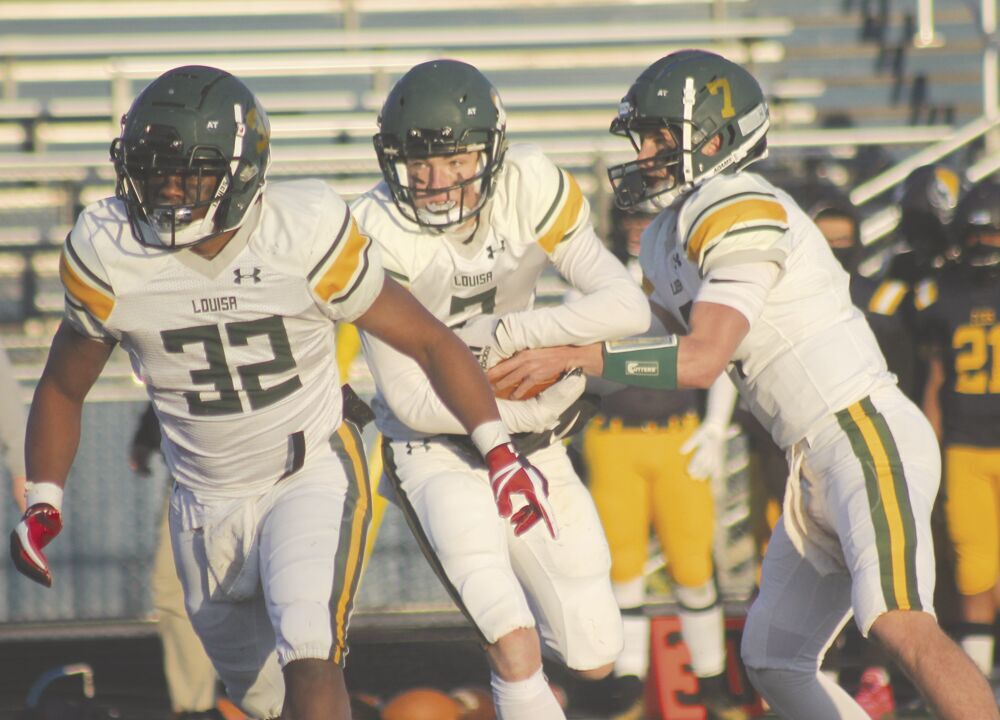 Chase Miller (center) takes a handoff from quarterback Landon Wilson (right) while Kalup Shelton looks to clear a path for him. 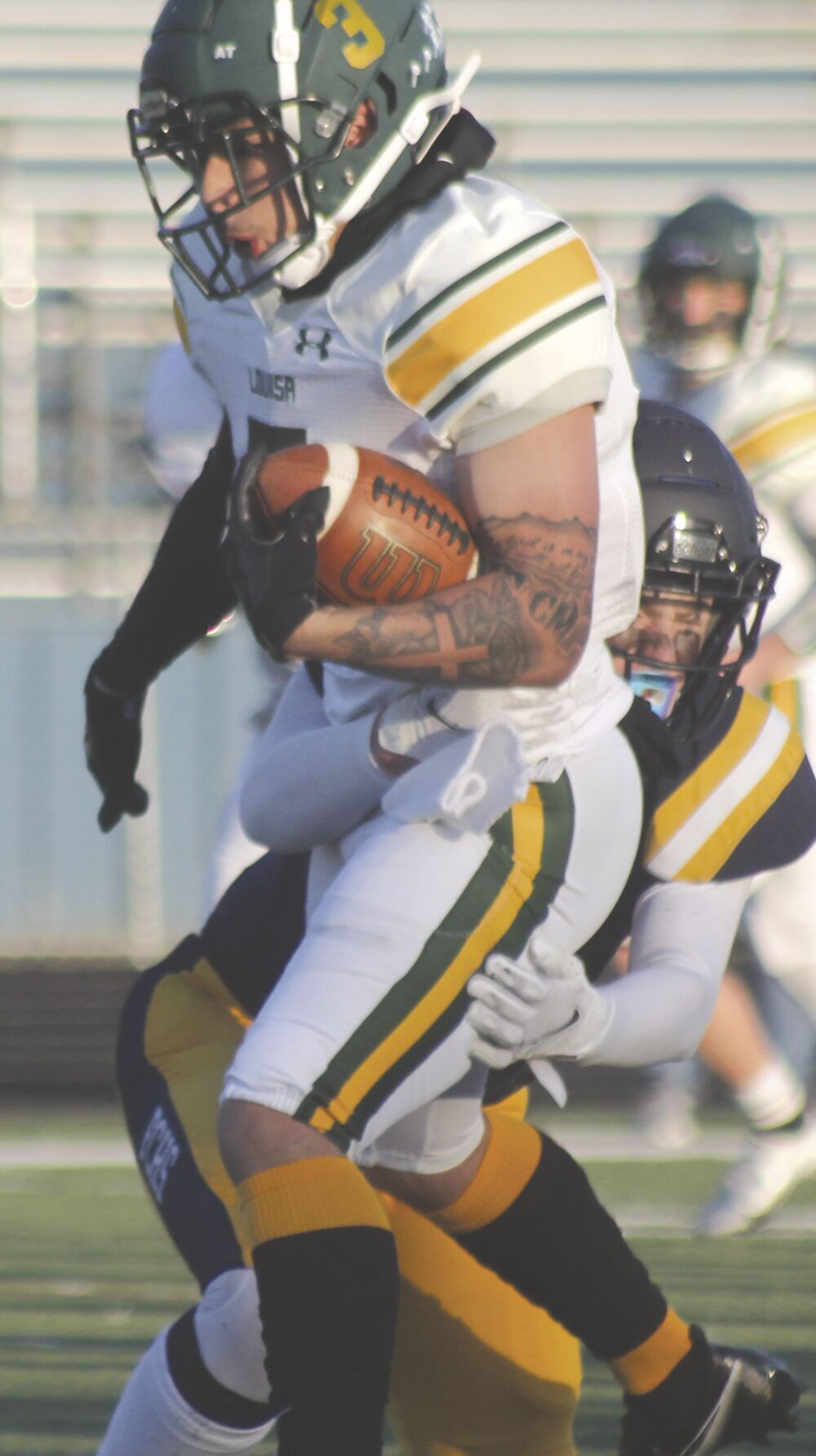 Logan McGhee tries to shake a Fluco tackle as he works his way down the field.

Chase Miller (center) takes a handoff from quarterback Landon Wilson (right) while Kalup Shelton looks to clear a path for him.

Logan McGhee tries to shake a Fluco tackle as he works his way down the field.

The Louisa Lions’ football team build up an early lead and made it stand, defeating the Fluvanna County Flucos 42-7 on March 19 to bring their season record to 4-0.

The Lions didn’t waste any time in setting the tone for the game. The defense held the Flucos to a three-and-out on their opening possession, then the offense took over on the 11-yard line and began working their way down the field. Senior Logan McGhee broke loose for a 16-yard run to get the ball to midfield and junior Jordan Smith came up with the score a couple of plays later on a 34-yard run. Sophomore Caden Lundy put  the extra point away to give the Lions a 7-0 lead with 4:41 left in the first quarter.

Louisa kept that momentum going on their next possession, taking over inside Fluvanna territory at the 40-yard line. Sophomore quarterback Landon Wilson fired off a 21-yard pass to senior Kalup Shelton to move the ball to the 19, then Shelton and junior Chase Miller combined to get the ball to the five. Wilson took it from there, covering the distance in a single burst for the score. Lundy’s kick was good and the Lions were now up 14-0 heading into the second quarter.

The Lions scored again on their next possession, this time with a 27-yard touchdown pass from Wilson to Miller, capping a 70-yard drive. Lundy’s kick went just wide of the uprights, leaving the score at 20-0 with 8:59 left in the half.

The Flucos started building some offensive momentum on their next drive, making it into Louisa territory before being knocked back to midfield and being forced to punt. Louisa didn’t hold onto the ball long, as AJ Wyche picked off a pass from Wilson and ran it back to Louisa’s 17-yard line. The Flucos fought their way to the one-yard line and Owen Leydig put it away for the score. Will Davis’s kick was good, making the score 20-7 with 48 seconds left in the half.

It turned out to be more than enough time for the Lions to respond.

Junior Jaylen Beach took control of the kickoff on the 20-yard line and started running down the field, taking it to the house for an 80-yard score with 34 seconds on the clock.

“Once I had [the ball], I saw the blocks set up and I just had to hit the hole and just run,” Beach said. “That was my first touchdown of the season, and I wouldn’t have it any other way.”

The Lions lined up for a two-point conversion, but the pass failed. But the momentum had shifted back to Louisa, and they didn’t look back. They got the ball to open the second half, starting on their own 49-yard line. They covered the 51 yards to the end zone in four plays, with Shelton getting the score on a 26-yard scamper. Lundy’s kick was good to extend Louisa’s lead to 33-7 with 10:45 left in the third quarter.

Louisa’s defense came up with the next points, with sophomore Quinton Wash tackling John Rittenhouse in the end zone for a two-point safety conversion, boosting Louisa to a 35-7 lead with 4:06 left on the clock. Senior Armani Comfort caught the kickoff and raced 63 yards back down the field toward the end zone, setting the Lions up for another score on the two-yard line. Smith put it away and Lundy’s kick was good to boost Louisa to a 42-7 lead with 3:27 left in the third quarter.

“We had two weeks to practice and got focused, and our goal was to come out here and play a clean football game, and we did that for the most part,” said head coach Will Patrick. “These kids are just playing so hard, I can’t ask them to do any more, they’re lining up right and communicating and playing with passion, pride, spirit, and enthusiasm and that’s what I love about this group of young men.”

Shelton carried for 95 yards on the ground, and Smith added 43. Wilson was six-for-10 in the air for 82 yards. Miller snagged one pass for 27 yards, Shelton caught one for 21 and McGhee had two receptions for 13 yards.

The Lions hit the road again this week, traveling to Western Albemarle to take on the Warriors. Kickoff is scheduled for 6:30 p.m.