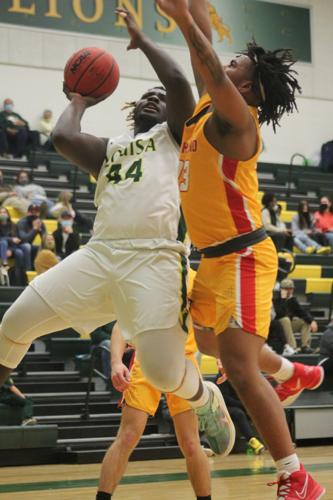 Qwenton Spellman takes a shot under pressure during the Lions home game against the Goochland Bulldogs on Jan. 14. 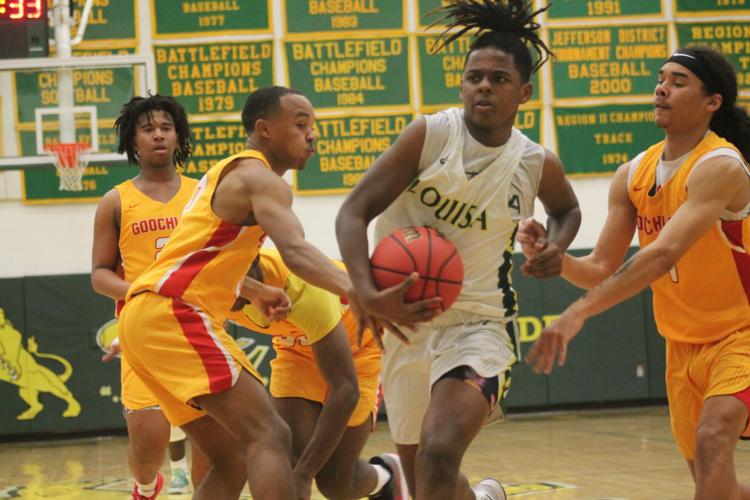 Takai Comfort braks through Goochland’s defense during the second half of the Lions’ home game against the Bulldogs. Comfort ended the night with a game-high 15 points. 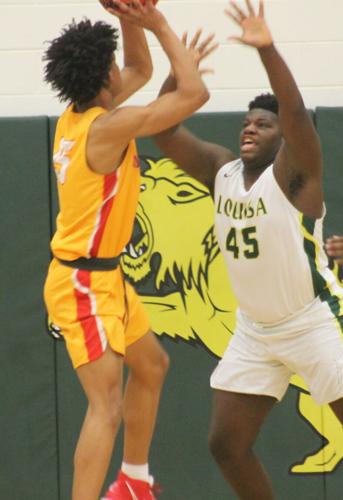 Gavin Anderson shoots around the defense during the Lions’ home game against Amherst on Jan. 12.

Qwenton Spellman takes a shot under pressure during the Lions home game against the Goochland Bulldogs on Jan. 14.

Takai Comfort braks through Goochland’s defense during the second half of the Lions’ home game against the Bulldogs. Comfort ended the night with a game-high 15 points.

Gavin Anderson shoots around the defense during the Lions’ home game against Amherst on Jan. 12.

The Louisa Lions’ boys’ basketball team picked up their first win of the season last week, defeating the Goochland Bulldogs 65-43 in The Den on Jan. 14.

“It feels great to get that first win,” said junior Takai Comfort. “Especially after we’ve been putting in the work and not getting the result that we wanted.”

Comfort got the Lions on the board with an early three-point bucket, putting them up 3-2 and setting the tone for the game. Led by a pair of three-pointers from sophomore Cameron Quarles, the Lions were able to extend their lead to 14-2 by the two minute mark. They held off a late run by the Bulldogs to lead 23-8 at the end of the period.

Quarles added five more points in the second as the Lions continued to widen the gap, leading 35-15 at halftime. Quarles ended the night with 11 points, nine from outside the arch.

Comfort led the Lions in the third quarter with 10 points as Louisa jumped to a 50-25 lead by the end of the period.  The Lions stayed well ahead of the Bulldogs in the fourth quarter to seal the win.

“We finally put one together for four quarters,” said Coach Roger Brooks. “We ran our stuff like we should. We did some different stuff defensively, trying to confuse them a little bit ... We’ve turned this thing around, now we’ve got to keep the momentum going forward and build off of this and keep our intensity up in the third and fourth quarters.”

Comfort was the leading scorer for the game with 15 points. Junior Wyatt Snyder added eight and junior Qwenton Spellman and sophomore Connor Downey put up seven points each.

Three-point baskets were a big factor in the Lions’ win, with 27 of their points coming from outside the arch. In addition to the three from Quarles, Comfort and freshman David Robinson each sank two, Robinson’s serving as the capstone to each half of the game. Downey and senior Evan Straley each sank a three-pointer during the game.

“They’ve just got to be patient and run their sets,” said coach Roger Brooks. “They’ve all got a lot of confidence and can shoot the ball well, and fortunately [the shots were] falling tonight for us.”

The win came on the heels of a close home game earlier in the week, this one against Region D opponent Amherst on Jan. 12. After leading for most of the game, a late run gave the edge to the Lancers and the Lions fell 49-44.

Spellman put up a pair of buckets to open the game, giving the Lions a 4-0 lead after a minute of play. They stayed on top until the midway point of the quarter when a trio of Lancer baskets gave the visiting team the advantage. The Lions fought back and managed to retake the lead with a three-pointer from Comfort, going up 11-7. A late Lancer three-pointer cut the lead, but the Lions stayed on top at the end of the quarter.

Amherst quickly got back on top in the second quarter, but another three-pointer, this one from Downey, got the Lions back up 14-12. Straley and Downey each hit buckets from outside the arch to extend the Lions’ lead to 20-12 with 3:40 left in the half. The Lancers again made a run and chipped away at the lead, pulling to 21-18 at the half.

The Lions kept just ahead of the Lancers for most of the second half, but a late run in the third quarter put Amherst up 35-33, and they extended that lead over the first half of the final quarter, leading 47-37 with two minutes left in the game. Louisa’s offense made an effort to get the lead back, with Downey sinking two more three-pointers to pull to 47-44 in the final seconds, but that was as close as they would get.

Spellman led Louisa with 13 points and Downey put up 12 points for the Lions, all from three-point range.

“Connor brings us another scoring threat from outside,” Brooks said. “He’s been confident and aggressive on offense and he always knows his assignments defensively. We look to continue to build on his confidence and put him in situations where he can get good looks at the basket.”

The Louisa Lions’ girls basketball team traveled to Goochland High School on Jan. 14 for a road game against the Bulldogs. The Lions took an early lead and never looked back, winning 61-22.

Louisa came out with a quick offense and a strong defense, putting up 15 points in the first quarter while holding the Bulldogs to two. They didn’t let up in the second, adding another 22 points to extend their lead to 37-7 heading into halftime, then locking things up with a 20-point third quarter performance.

“This was a good bounce back game and win for us,” said Coach Nick Schreck. “We were able to get the game to the speed we wanted and took advantage of Goochlands mistakes. Offensively we moved the ball well and took good shots. We got good production from the whole team and we are constantly getting better each game.”

The Lions travel to Orange County on Jan. 21 for a road contest against the Hornets, with tip off scheduled for 7:30 p.m. The Lions then travel to Highland Springs High School on Jan. 22 to play in an invitational showcase. The Lions will play Norview at 6 p.m.