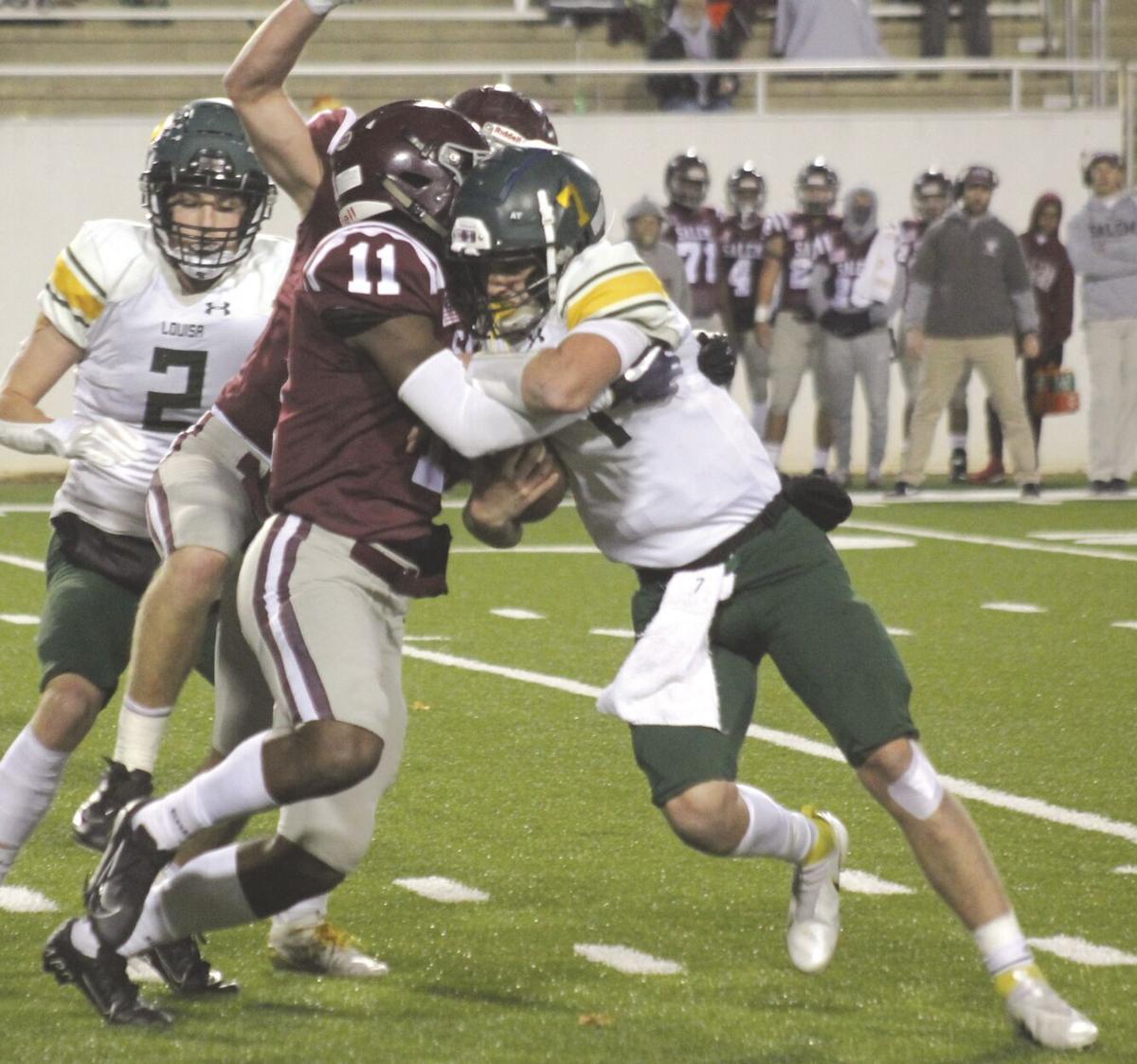 Landon Wilson clashes with Spartan defenders during the Lions’ Region 4D semifinal matchup with the Salem Spartans on Nov. 19. 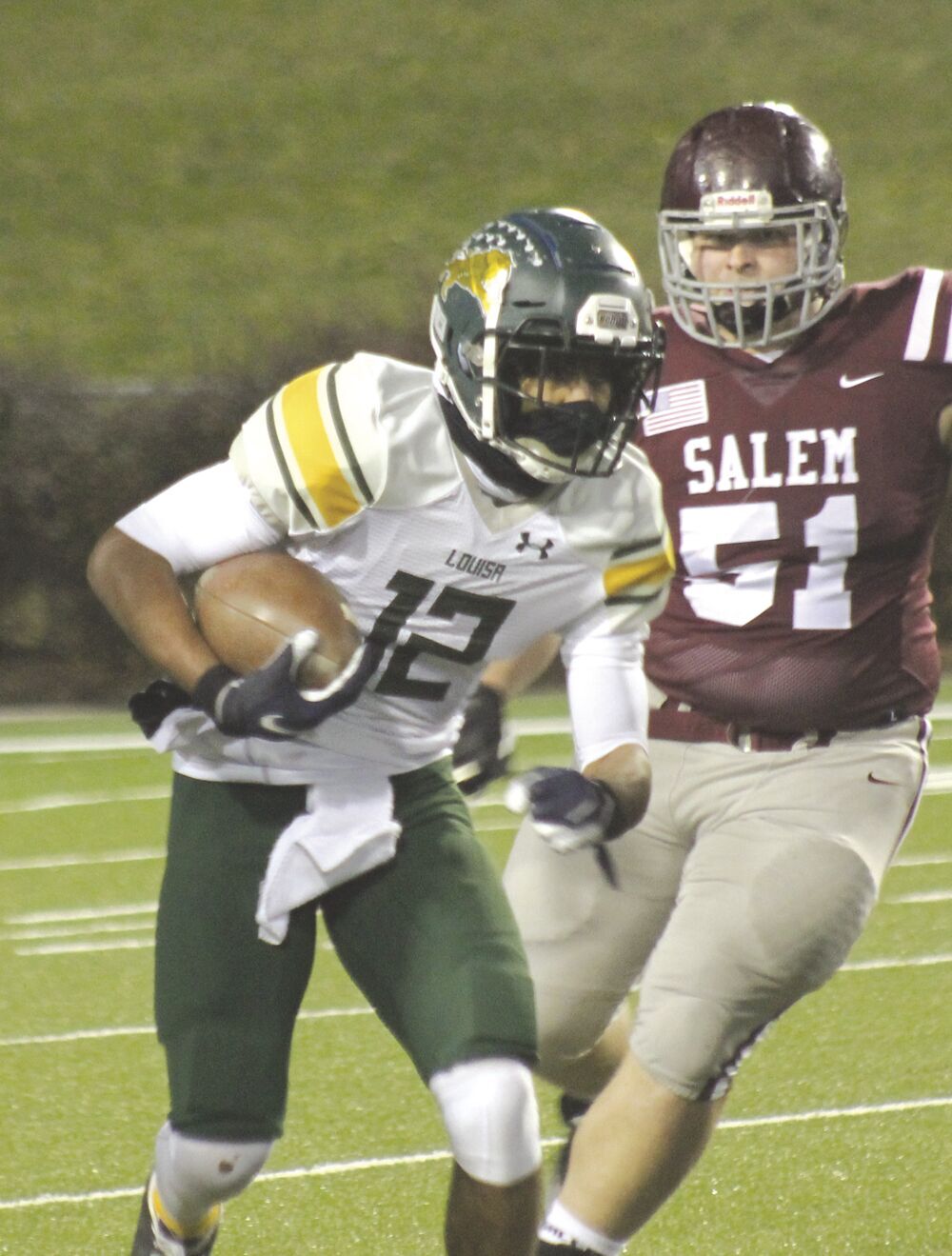 Jordan Smith looks for a path down the field during the Lions’ Region 4D semifinal game against the Salem Spartans.

Landon Wilson clashes with Spartan defenders during the Lions’ Region 4D semifinal matchup with the Salem Spartans on Nov. 19.

Jordan Smith looks for a path down the field during the Lions’ Region 4D semifinal game against the Salem Spartans.

The Louisa Lions’ football season came to a close last week, following a 55-7 loss to the Salem Spartans on Nov. 19.

The Spartans set the tone for the game on their first offensive play. After stalling the Lions’ opening drive and getting the ball on their own 13-yard line, Cam Leftwich took the ball and ducked around the Lions’ defense, sprinting 87 yards back down the field for the score.

The Spartans proved it wasn’t a one-off on their next possession. Quarterback DaRon Wilson connecting with Chauncey Logan Jr. for a 37-yard pass for another first-play score, putting Salem up 14-0 just over midway through the first quarter.

“We just came out of the gates so slow,” said Louisa Coach Will Patrick. “We got a first down on the fake punt, then we had to punt again and their first two offensive plays they scored touchdowns on. I really think their defensive line and their linebackers are outstanding. They really flew around and took away a lot of things we were trying to do.”

The Lions’ efforts to build offensive momentum stalled for most of the first half, with drives either ending in turnovers or punts. The Spartans, meanwhile, continued to add to their lead thanks to Leftwich’s efforts on the ground. The 5-foot-11, 225-pound fullback put up two more touchdowns before the Lions got on the board. The first came on a 38-yard run, the Spartans’ third and final single-play drive, and the other with a six-yard reception. Salem was up 28-0 with 9:32 left in the first half.

The Lions were able to get something going on their next possession, with Landon Wilson, Jordan Smith, Austin Talley and Troy Fischer pounding out a 12-play drive to cover the 74 yards they needed to score. Wilson finished things off with a 12-yard run to the end zone, dragging a couple of defenders with him as he scored, getting Louisa on the board with 3:26 left on the clock.

Louisa’s defense was able to stall the Spartans’ next drive, forcing a three-and-out to get the Lions the ball back on their own 11-yard line. They were able to put together a couple of plays to move it but turned the ball over on downs at their own 30-yard line. Salem was able to capitalize this time, with DaRon Wilson again connecting with Logan, this time for a 15-yard score in the final seconds of the half.

“We had that one touchdown drive where I thought Landon really ran the ball hard, Jordan [Smith] and [Austin] Talley too,” Patrick said. “We missed a few opportunities in the passing game and just really never had a chance to get the offense going.”

The second half was dominated by the Spartans. Leftwich added two more touchdowns on the ground in the third quarter, one from one yard out, the other from 38, ending the night with a game-high 195 yards on the ground. Isaiah Barlow also hit triple digits for the Spartans, adding 101 rushing yards and a touchdown of his own in the fourth quarter.

Landon Wilson led the Lions’ offense with 71 rushing yards over 25 carries and 27 passing yards on three completions. Fischer added 19 yards on the ground, followed by Smith with 16. Smith caught a pair of passes for 18 yards.

“We learned a lot tonight,” Patrick said. “There are a lot of things we need to work on. Lot of things we need to get better on during the offseason. I’ve got 18 seniors that are graduating, hats off to them. Some of them will go on to play at the next level, some won’t, but at the end of the night, I’m proud to be the Louisa Lions football coach.”

After losing a large number of seniors from their season last spring, Patrick said there were a lot of questions about what this season would look like and who would step up to fill those roles.

“I’m really proud of my boys,” he said. “We lost a lot of seniors last year. This team, we really didn’t know what to expect going into the season in July. We had a lot of holes to fill. We had a lot of guys step up, including our three seniors on the offensive line. Finishing 9-3 and getting a share of the district title and beating E.C. Glass last week and then coming down here to a storied place to play football.

“This group of guys, it was one of the best times that I’ve had coaching,” he continued. “It was fun. Obviously we didn’t get what we wanted tonight, but this is one of the best group of kids I’ve been around in my 14 years of coaching, no doubt about it.”