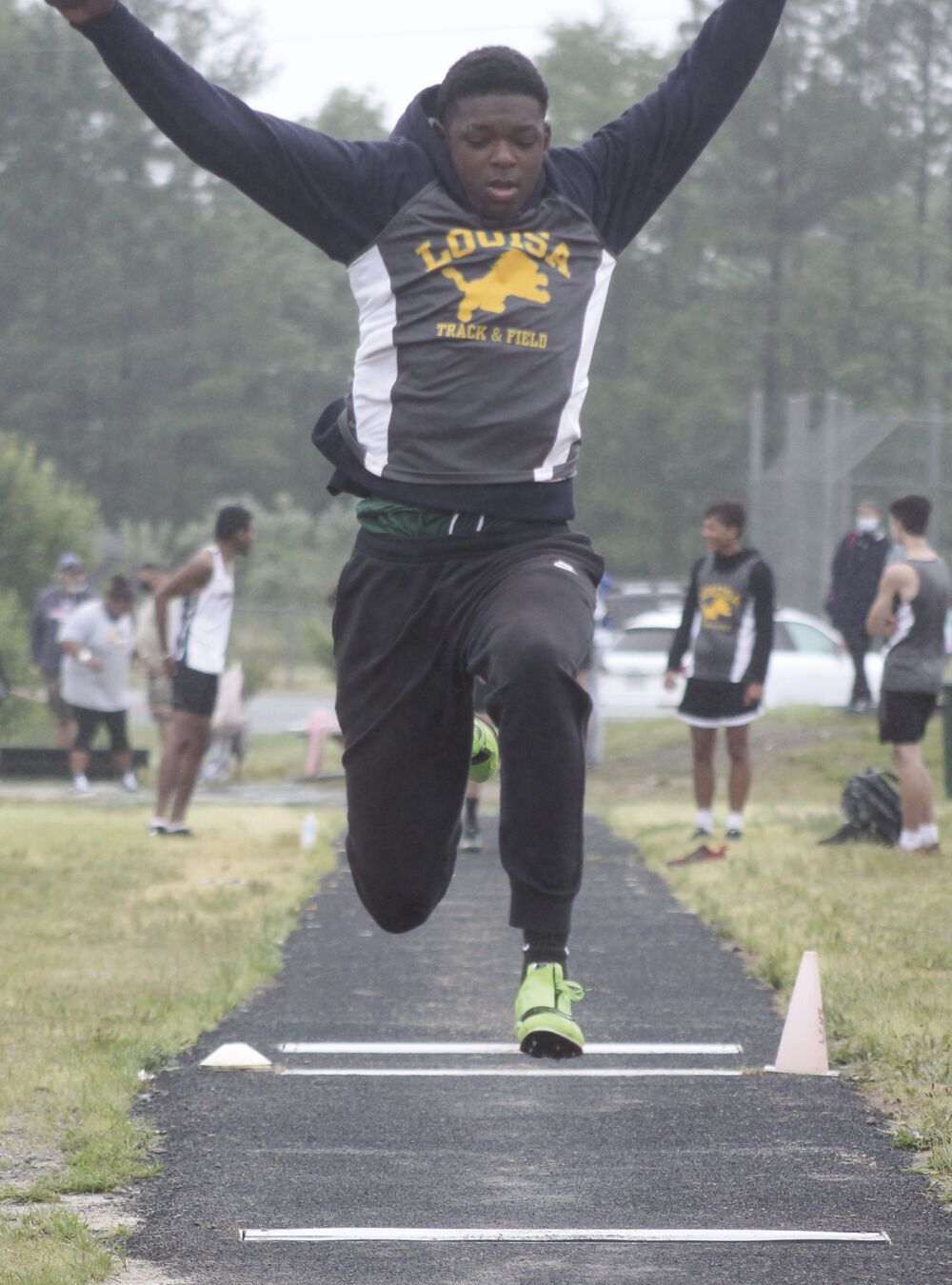 Teyachta Harris leaps to a second-place finish in the triple jump during the Lions’ home meet on May 29 with a jump of 35 feet. 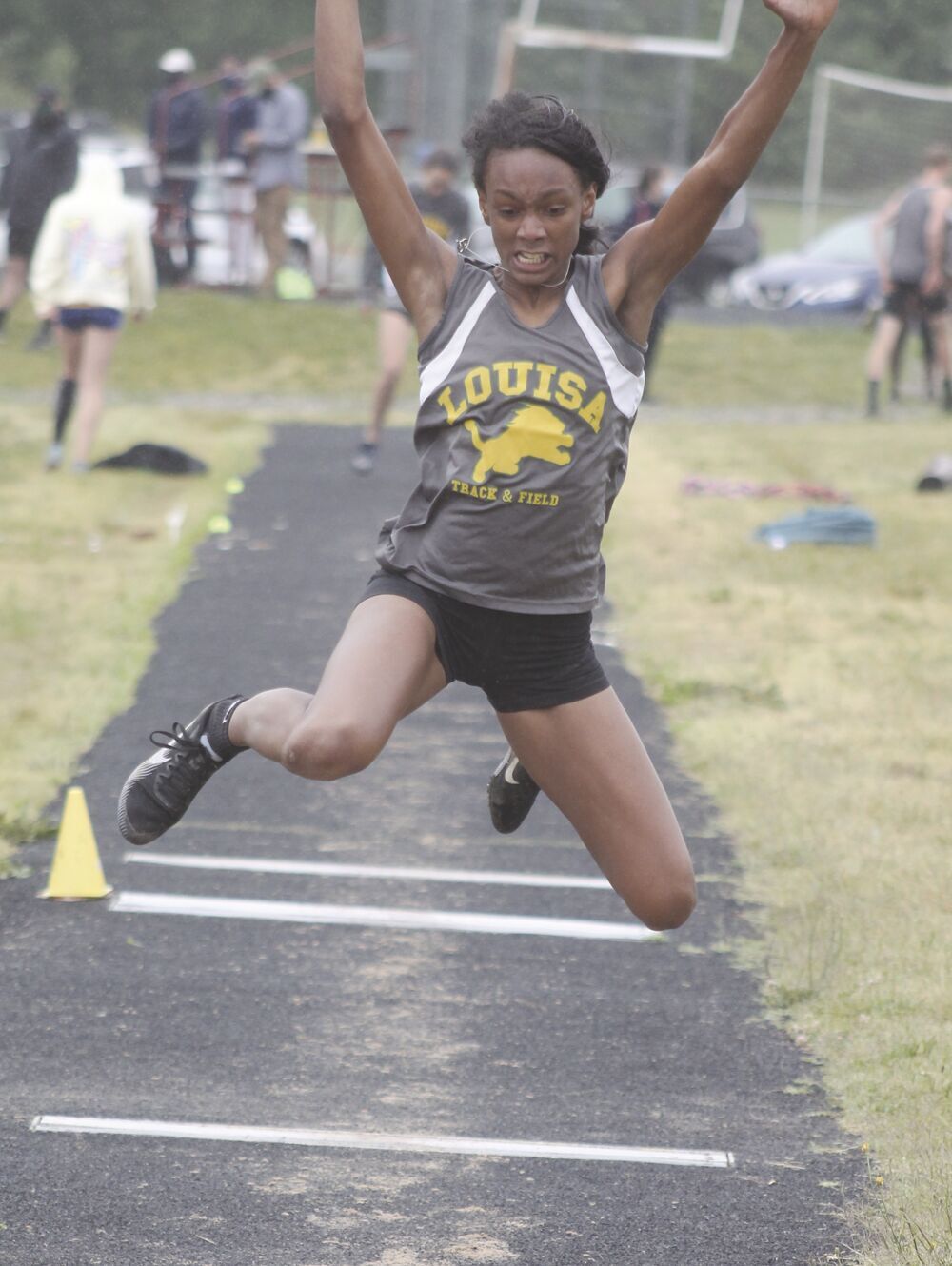 Teyachta Harris leaps to a second-place finish in the triple jump during the Lions’ home meet on May 29 with a jump of 35 feet.

The Louisa Lions’ track and field teams hosted their final home meet of the season on May 29, competing against athletes from Albemarle, Western Albemarle, and Maggie L. Walker Governor’s School. The girls’ team won the day with 91 points, while the boys’ team finished second with 57.5 points.

Dezmajia Carter scored a trio of first-place finishes, winning the 100-meter dash with a time of 13.67 seconds and the long and triple jump events with winning jumps of 16 feet, six inches and 34 feet, three inches, respectively. Alicia Woodfolk led the field in both the shot put and discus events, with respective winning throws of 36 feet, nine inches and 96 feet, 10 inches.

Maddox Pleasants won the 400-meter dash with a time of 1:06.41, followed by Leslie Faith in second with a time of  1:09.45. Sylvie Jackson won the high jump with a height of five feet.

The Lions traveled to Charlottesville on June 1, taking on Jefferson District opponents Fluvanna, Charlottesville and Monticello. The girls’ team finished first with 97 points, while the boys’ team came in second with 62, finishing just behind Monticello (68).

Carter finished first in the 100-meter dash with atime of 12.79 seconds and placed second in the 200-meter dash finishing in 27.15 seconds. She also won the long and triple jump events with winning jumps of 16 feet, 11 inches and 36 feet, respectively.

Diymond Brooks placed second in the long jump and triple jump with distances of 15 feet, 6.5 inches and 33 feet, 3.75 inches, and Fritz rounded out a Louisa sweep in the long jump with a third-place finish of 15 feet, four inches. Fritz also finished first in the pole vault, clearing nine feet, followed by Riley Smith in second place

Woodfolk took first in the shot put and discus with respective throws of 35 feet, seven inches and 114 feet, two inches, and Jackson cleared five feet to win the high jump.

Colin King and Tyler Torbush tied for first place in the pole vault, both clearing nine feet to take the top spot. Justin Davenport placed third with a height of eight feet.

Several other Lions finished among the top three in their respective events. Logan McGhee took second in the long jump with a distance of 19 feet, .0.75 inches, and Joshua Gray placed third in the 200-meter dash with a time of 23.76 seconds. Wyatt Snyder placed third in both the 110- and 300-meter hurdles with respective times of 21.53 seconds and 48.44 seconds, and Caiden Davenport finished third in the 3,200-meter run with a time of 10:52.70.

The Lions now look to the postseason which starts with the Region 4B championship on June 10 at Atlee High School. Events begin at 11 a.m.