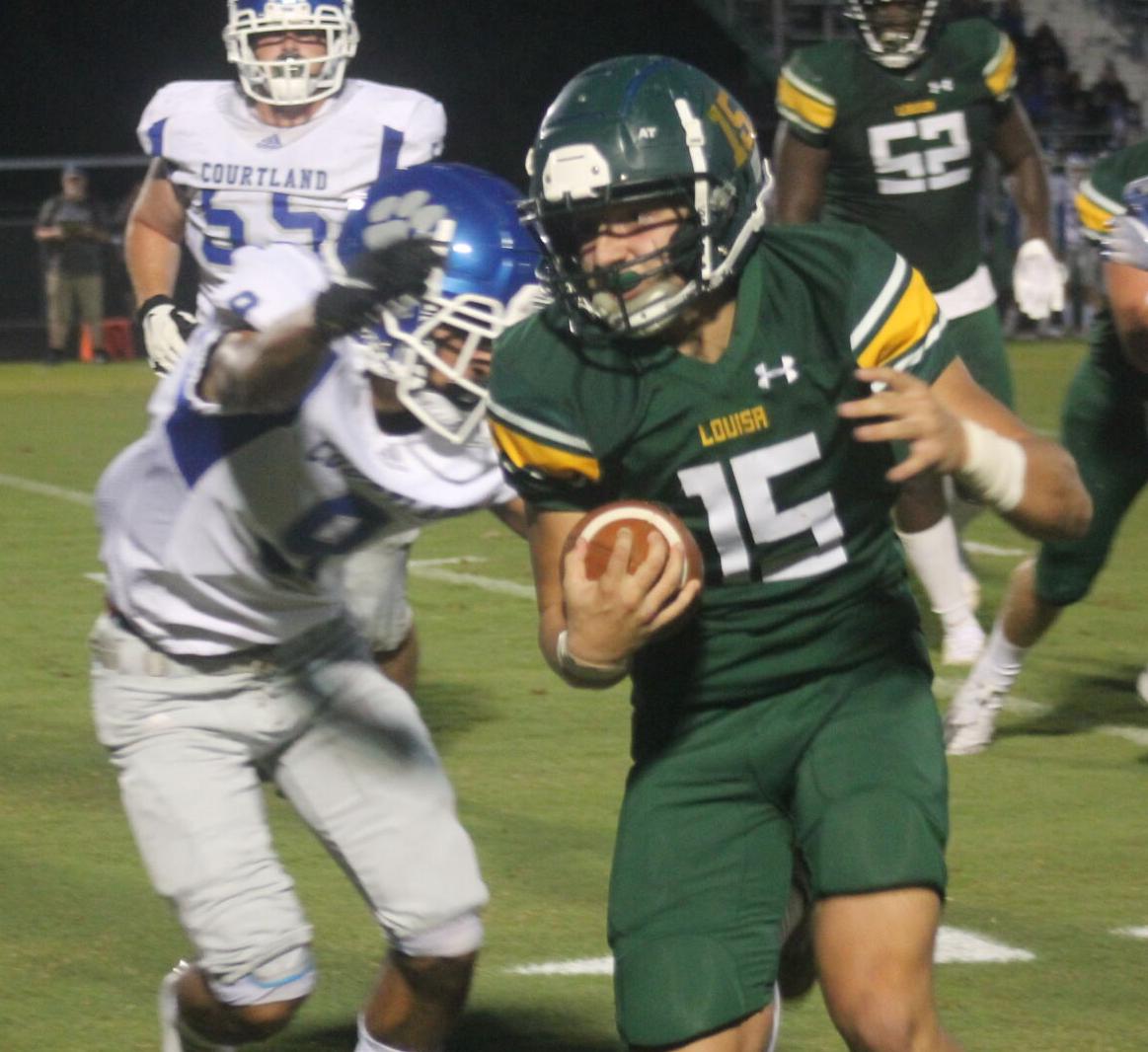 Austin Talley tries to skirt a Courtland defender during the Lions' home opener on Sept. 3. 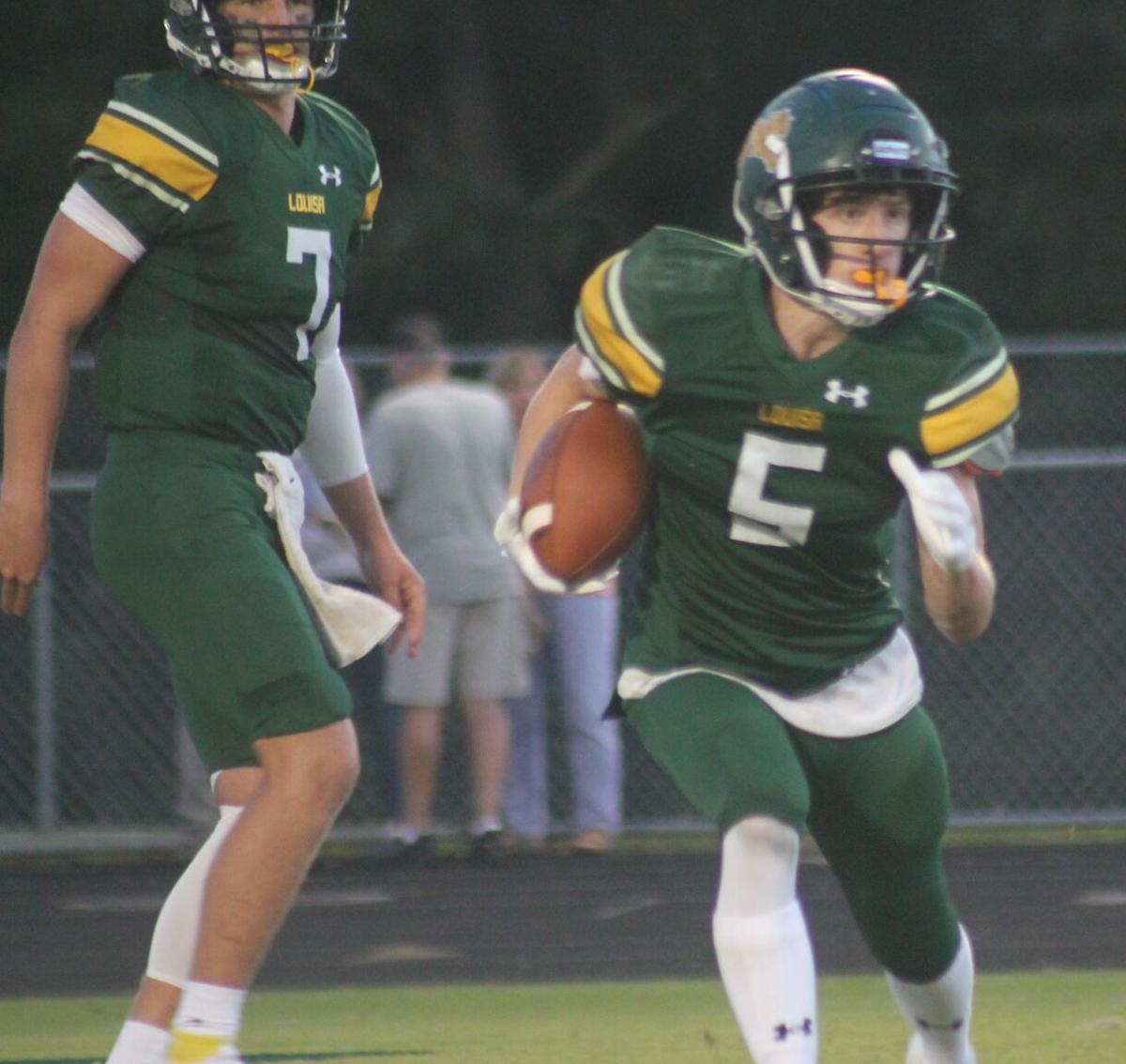 Jaylen Beach looks for a path down the field.

Austin Talley tries to skirt a Courtland defender during the Lions' home opener on Sept. 3.

Jaylen Beach looks for a path down the field.

The Louisa Lions varsity football team scored a win in their 2021 home opener, defeating the Courtland Cougars 45-20 in the annual Big Cat Classic on Sept. 3.

The Cougars took the opening kickoff and made an earnest effort with it, moving the ball down to the Lions’ six-yard line before Louisa’s defense forced a turnover on downs. Landon Wilson connected with Jaylen Beach to get the ball out of the red zone, then broke loose for a 49-yard run to move the ball into Cougar territory.

A penalty on the visitors helped get the Lions to the 13-yard line, and Jordan Smith covered that distance in a single burst to get the Lions on the scoreboard. Caden Lundy put the extra point away to make the score 7-0 with 2:29 left in the first quarter.

The Lions’ defense kept the Cougars inside their territory for their next possession, forcing them to punt it away. Chase Miller caught the kick and ran it 25 yards back to set Louisa up on the Courtland 23-yard line. Austin Talley covered 21 yards on the ground over the next three plays and Troy Fischer punched through the Courtland defense from two yards out for the score. Lundy’s kick was good, extending Louisa’s lead to 14-0 with 9:30 left in the half.

Wilson got to show off his skills as a defensive player on the Cougars’ next possession, pulling down a pass for his first of two interceptions for the night. Head Coach Will Patrick said that letting Wilson get some time on the defense was “a no-brainer.”

“He’s one of our best athletes and competitors,” he said. “I think doing DB drills every day, commanding the offense and seeing the defense is going to help him become a better overall football player.”

With the ball once again in their possession – this time on their own 28-yard line – the Lions began making their way down the field, with Wilson and Smith combining for 26 yards on the ground to get to Courtland’s 46-yard line. Wilson then found Smith through the air, and Smith wove his way through the defense to pick up his second touchdown of the game. Lundy put away his third extra point, giving the Lions a 21-0 lead with 2:03 left on the clock.

Wilson nabbed his second interception less than a minute later, giving the Lions the ball inside Cougar territory. Wilson connected with Aiden Perry for a 30-yard pass to get the ball to the 17, then found Nathan Gramling for 10 yards to get to the seven. They were unable to get into the end zone, but Lundy kicked a 21-yard field goal to extend the Lions’ lead to 24-0 heading into halftime.

The Lions kept their offensive momentum going in the second half, with Smith picking up his final score of the night on a single 60-yard scamper for the first play of the half. Smith ended the night with a team-high 84 rushing yards over eight carries.

“We saw that they were crashing pretty hard down the middle so we bounced it to the outside and the hole was there,” Smith said.

Cats Stats: Why Arizona’s rushing attack — once the best in the Pac-12 — has run aground

Lundy’s kick was good yet again, boosting the Lions to a 31-0 lead with 11:38 left in the third quarter.

The Cougars got on the board on their next drive, with Liam Wojciechowski finding Kwame Whitaker for a 13-yard touchdown pass. Wojciechowski kicked the extra point, making the score 31-7 with 9:03 left in the period.

Neither team was able to add to their score on their next possession, but the Lions got another chance later in the third quarter. Starting on their own 30-yard line, Adam Mills carried the ball most of the way to midfield over four plays, then Talley broke loose for a 21-yard dash to get to the Courtland 32. Wilson found Jacob Bundrick for a 29-yard pass to get to the three, and Fischer put it away from there. With Lundy’s extra point, the Lions led 38-7 heading into the final period.

The Cougars were able to capitalize on their next possession, wiht EJ Rogers scoring on a 10-yard run. Wojciechowski put the extra point away, cutting Louisa’s lead to 38-14 with 9:04 left in the game.

Wilson picked up the final score of the night for Louisa, capping a 72-yard drive with a five-yard scoring run. The Cougars added one more score, this one on a 48-yard pass from Whitaker to Evan Donohue for a final score of 45-20.

Patrick gave particular praise to his offensive line for their role in allowing the Lions to make big plays.

“We challenged them this week, and they really stepped up their game,” he said.

Mills ran for 76 yards over 11 carries, Talley added 65 over 10 carries and Wilson had 60 over eight carries. Wilson was six-for-eight through the air for 139 yards.

The Lions are back in The Jungle this week, hosting the King George Foxes. They were originally slated to play the Massaponax Panthers, but the game was canceled due to COVID-19-related issues at Massaponax. Kickoff for the Sept. 10 game is scheduled for 7:30 p.m. An audio broadcast of the action provided by Tommy Nelson, Dicky Purcell and Byron Mehlhaff will be streamed through the Louisa County Athletics YouTube Channel. The broadcast begins at 7:15 p.m.