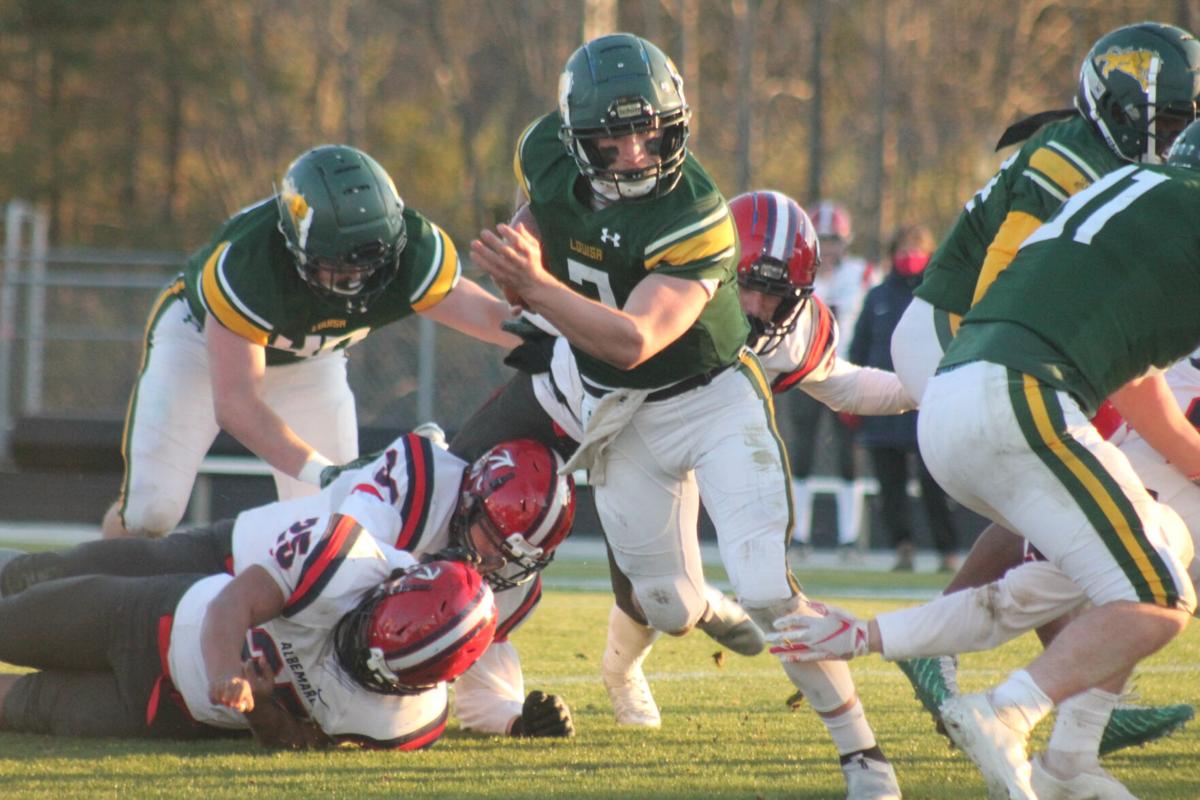 Quarterback Landon Wilson looks for a path down the field during the Lions’ home game against the Albemarle Patriots. 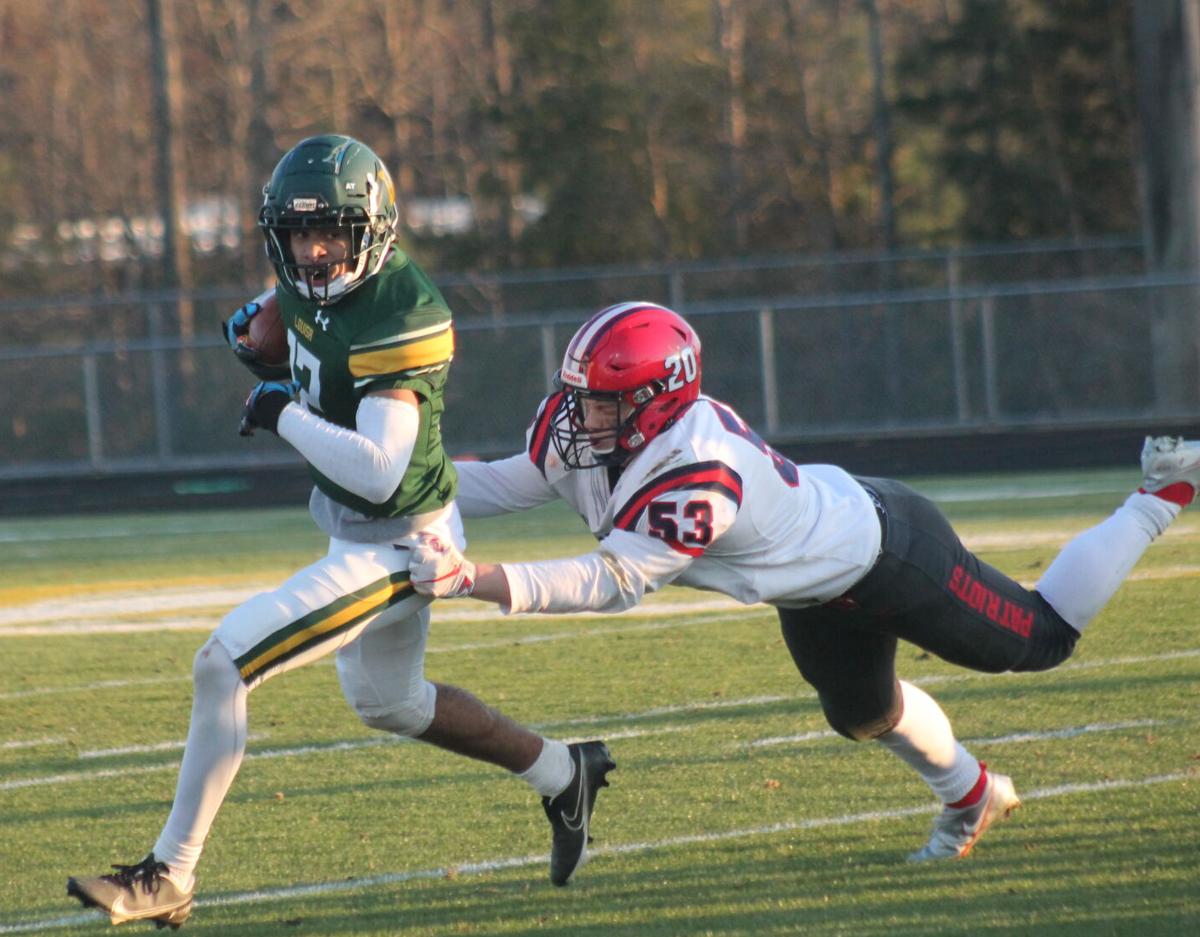 Jordan Smith tries to break away from Albemarle’s Nikolai Rogers.

Quarterback Landon Wilson looks for a path down the field during the Lions’ home game against the Albemarle Patriots.

Jordan Smith tries to break away from Albemarle’s Nikolai Rogers.

With their regular season now behind them, the Louisa Lions varsity football team looks toward to postseason play this week. The Lions travel to King George High School on April 9 to take on the Foxes in the Region 4B semifinals.

Both teams bring unbeaten 6-0 records to the playoffs, with the Lions wrapping up their regular season with a 27-8 win over the Albemarle Patriots last week, and the Foxes defeating Spotsylvania 42-15.

The Lions have also had some success through the air, with Wilson completing 32 passes for more than 400 yards. His favorite target is junior Chase Miller with 119 yards and five scores over eight receptions.

The Foxes lean heavily on their passing game on offense. Senior quarterback Charles Mutter has completed 106 of his 166 attempts for 1,534 yards and 16 touchdowns. His favorite target by far is senior Javon Campbell, who has pulled down 45 passes for 805 yards and 12 scores. Mutter has also completed 18 passes apiece to junior Kyle Reviello and senior Chris Cox for 267 and 213 yards, respectively.

King George also has more than a few weapons on the ground. Senior Von Whiting has 260 rushing yards and a trio of scores over 46 carries, and Mutter added 181 yards and two touchdowns with 37 carries. Sophomore Zach Ferguson made his 10 carries count, racking up more than 150 yards and three touchdowns.

“We’ve got to clean up some things on offense, and prepare for our opponent,” said Louisa head coach Will Patrick. “We’re going to do what we do every week to get ready.”

The Lions got a taste of how to handle a team with a strong passing game when they took on Albemarle at home to close out their regular season.

It took most of the first quarter for the Lions to get their footing, not making it out of their own territory on their first two possessions. An interception by Miller, his first of three for the night, got the Lions the ball on the Patriots’ 21-yard line. The offense drove down to the three-yard line before a lost fumble gave the ball back to the Patriots. The Lions’ defense turned up the pressure, keeping the offense contained and forcing a three-and-out. The Lions set up on the 29-yard line, once again looking to get on the board.

This time they made it happen. Smith took the handoff and covered the necessary distance in a single scamper for the touchdown. Junior Stephen Dean ran for the two-point conversion, giving Louisa an 8-0 lead at the end of the first quarter.

The Lions added to their score late in the second quarter. After taking a punt on Albemarle’s 46-yard line, the Lions worked their way down to the eight-yard line before Wilson got into the end zone for the score. Sophomore Caden Lundy put the extra point away to boost Louisa’s lead to 15-0 with just over two minutes left in the half.

The Patriots made their own push for the end zone on their next possession, starting at their 34-yard line and getting deep into Louisa territory before Miller snagged his second interception on the one-yard line.

“The play before, they’d run a slant and I knew they were going to go back to it, so I kind of favored the left side a little bit and it just so happened that the ball was thrown there and I caught it,” Miller said. “It always feels good to stop the offense and make those types of plays.”

The Lions’ celebration was short-lived. On their first play, Smith was brought down in the end zone for a two-point safety conversion, making the score 15-2 heading into the half.

2024 QB Dylan Raiola is going to 'sling it around yard' at FNL, and his dad, NU great Dominic, can't wait

Albemarle got the ball back to start the second half, but didn’t hold on to it for long as senior Logan McGhee picked up his first interception of the night, giving the Lions the ball on the Patriots’ 44-yard line.

Smith put up 13 yards on the ground to help move the ball to the 20-yard line, then Wilson connected with Miller for the score.

“Chase is such a utility player for us,” Patrick said. “He does all kinds of stuff for us, both offensively and defensively. He’s a very smart player who hustles, busts his butt and gives great effort and a great attitude.”

The Lions attempted a two-point conversion, but came up short. The score was now 21-2 with 7:31 left in the third quarter.

Miller and McGhee each grabbed another interception as the game went on, but the Lions weren’t able to capitalize on either of those drives. Their final points of the night came late in the fourth quarter, when senior Armani Comfort got in on the interception action, pulling down a pass and running it 37 yards back down the field for a pick-six.

In total, the Lions had six interceptions throughout the game.

“That’s insane,” said defensive coordinator Mike Clements. “I’m not sure, but I don’t think Louisa’s ever had that many picks in a game.”

Clements credited defensive backs coach Dillon Hollins for his help in coming up with the game plan and the defensive line for the role they played by putting pressure on Albemarle quarterback Jacob King.

“Our D-line really went after it,” he said. “[King] was throwing off his back foot a little bit and he had to throw it up and our guys were there to catch it.”

The Lions opted to try another two-point conversion, but were again kept out of the end zone. With 3:01 left in the game, the score now stood at 27-2.

The Patriots got a touchdown of their own on their next possession, with King finding William Townsend for a 45-yard pass. Albemarle attempted a two-point conversion, but came up short, leaving the score at 27-8 with 1:13 left to play. Niether team was able to move the ball before the clock ran out.

The win wrapped up an unbeaten regular season for the Lions – their fourth in a row – and secured the team another Jefferson District championship title.

“It feels awesome,” Patrick said. “That’s hard to do. It’s hard to win every single game you play in the regular season.”

Friday’s regional semifinal kicks off at 7 p.m. and will be livestreamed through the Louisa County Athletics YouTube channel with commentary by Tommy Nelson and Dicky Purcell. Pregame coverage begins at 6:45.